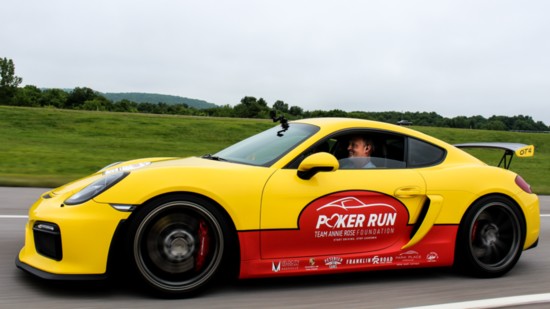 Revving Up the Saving Horsepower in the Fight Against Cancer

“But where the danger is,” a German poet of the Romantic era once wrote, “also grows the saving power.”

And the saving power is certainly rising to the challenge on this front. In the early 1960s, leukemia patients had only a 10% chance at achieving remission. Now, thanks to the unremitting efforts of tens of thousands and to institutions like the Leukemia & Lymphoma Society, those numbers are reversed. Today, some 90% of patients diagnosed with a bloodborne cancer will achieve remission.

It's much better, but it's still not good enough. The finish line is 100% remission. And that’s why Team Annie Rose Foundation has started its engines, rolling toward the checkered flag of bloodborne cancer’s final defeat. Founded in 2013, TARF is a Brentwood-based nonprofit that funds research into all blood cancers and provides support for patients and families here in Tennessee. The organization is the brainchild of Annie Rose, herself a survivor of acute lymphocytic leukemia. Along with her dad, Ross Robinson, a cardiovascular anesthesiologist, they came up with ways to raise funds and eventually struck upon the concept of a poker run, a sort of group-joy-ride-meets-casino-gaming for a worthy cause. Almost all the vehicles are driven by their owners, although dealerships will sponsor a few of their newest models as well.

“When we started the foundation, we did a golf tournament," Ross says. "But then a friend told me about a poker run that was initially started by a motorcycle group. So I thought, 'Well, if you can do it with a group of motorcycles, then why can’t you do it with cars?'”

Thus the Poker Run was born with this past May, marking its sixth and biggest year. From its origins in 2013 when the event drew 28 cars and raised $3,500, this year’s Poker Run saw 105 vehicles participate and generated more than $54,000. Talk about rolling in the right direction.

“The Poker Run is a blast,” assures Zach Durbin, a Brentwood Lifestyle photographer and a man who deeply appreciates a finely crafted sports car. “I got to tool around in a new 911 Carrera GTS with Mark Powers of Porsche of Nashville. I couldn’t believe I was getting paid to have so much fun!”

Zach isn’t the only one who loves the event. The Poker Run has become so popular that TARF has to limit the number of participants in order to keep the event’s intimate vibe humming like a well-oiled machine.

“The Poker Run has become really well-known in the car community and has reached critical mass. It’s gotten to the point that I have to turn people away,” Ross says.

But while the number of participants is limited, there is still room to grow in terms of sponsorship. Much success has already been made here with wonderful local support.

As for future plans, Ross is clear: “Now our challenge is to keep it fresh, to keep it fun, to increase the number of sponsors.”