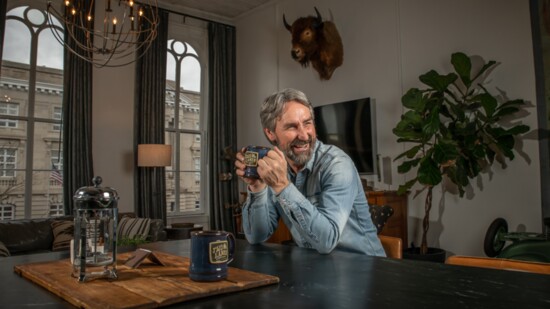 Many boys develop a fascination with bicycles, motorcycles or comic books growing up. Only a handful generate income from their hobby. Very few keep the most prized picks in their own climate-controlled garage. Then there’s Mike Wolfe.

Born and raised in the Midwest, Mike’s personality showcases the characteristics of his upbringing. He’s friendly, talkative, and expresses a child-like excitement when asked about any item in his extensive collection. Watching him bounce around his garage, pointing out his favorite finds and telling their stories shows his passion for what he does is still very much alive after all these years.

Before Mike found fame on his hit TV reality show, American Pickers, he visualized a show featuring him rummaging through folk’s attics, barns, and garages, and buying his favorite finds. He pitched the show’s concept for five years, getting rejected by several production companies until the History Channel found his idea intriguing.

Although the network expressed excitement over the project, neither their executives nor Mike had a grasp of what the show’s format would look like.

“I’ve pitched many show concepts through the years,” Mike told us over a plate of fried chicken at Puckett’s in downtown Columbia, TN. “You’re not going to sell a show today without a well-developed format. It’s just not going to happen. We created what I refer to as ‘artifactual, transactional television.’ The change came when we introduced a transaction to the show.”

Before filming even began, Mike became the executive producer, which has allowed him to shape the show into exactly what he wants it to be. As "American Pickers" begins its 11th year, no one can argue with the show's success. The latest ratings have the broadcast as one of the most popular cable network reality shows. Besides a handful of cable news programs, few reality shows have American Pickers' longevity. One reason is the show's loyal fan base, and their love for the stories behind the unique items from the past.

Mike’s finds from the show can be found at his two Antique Archaeology shops in LeClaire, IA and Nashville, TN.

The Iowa location is in a two-story fabrication shop and is home base of "American Pickers". The Nashville store located in the Historic Marathon Motorworks building showcases Mike’s antiques from floor to ceiling and unique home decor that will certainly be a conversation piece for years to come.

Just like his early instinct in capturing a key production role for his show, Mike’s decision to relocate to the South several years ago has proved positive for him.

While exploring the communities in rural Tennessee, Mike fell in love with the small town of Columbia just south of Nashville. Driven by his passion for small town preservation, he found several historic buildings there he wanted to revive. One of the first was a building just off the town square that originally housed the local Chevrolet dealership and was built in 1947. Once the home of many of the local car dealerships, Mike is trying to restore this street to it's former glory and designate it as Historic Columbia Motor Alley.

Mike also feels that creating inviting places for visitors to come stay in downtown Columbia's heart will benefit the community. After purchasing a beautiful pre-1860s building right on the square, Mike kept the bike shop downstairs open and renovated the loft upstairs. Inspired by his decades of driving on two lanes, he named this vacation rental loft the Two Lanes Guesthouse.

The loft’s decor highlights furnishings acquired through Mike’s travels, including antique wooden bikes hung from the ceiling, vintage guitars, and a 1951 vespa sitting in front of a massive antique circus poster ready to sit on for taking photos to share. The guesthouse also represents the first time that his fans have been able to see the way Mike envisions the pieces he finds in the dirt as unique home decor. While decorators have been purchasing from him for years, you can now see his vision for what some people see as rusty junk presented in style in his loft vacation rental.

Constructed in 1857, the one-bedroom loft with 13 foot ceilings, original wood floors, and exposed brick also offers a direct view of the town’s square and historic courthouse through the full length wall of windows. Travelers can book their stay on the loft’s website or Airbnb.

“The main reason I renovated the guesthouse is to set an example of what can happen when we invest in heritage tourism,” says Mike while giving our group a tour of the charming unit. "It’s important to have stylish, quaint, places to stay in growing communities. Once people start living and staying in downtown areas, the activity level and nightlife will increase and more businesses will benefit.”

The COVID-19 pandemic obviously altered the filming and production schedule for "American Pickers". However, the break allowed Mike to focus on some of his other new ideas. One of his recent projects is called Nashville’s Big Back Yard.

Nashville’s Big Back Yard is as much an economic and tourism development project as it is an initiative. The project focuses on rural counties and small towns with populations of 5,000 or less along the historic Natchez Trace Parkway between the the music icons and creative hubs of Nashville, TN and Muscle Shoals, AL.

Mike joined forces with Aubrey Preston for this project, a Middle Tennessee philanthropist that had the vision to protect rural areas like Leiper’s Fork by ensuring their historic preservation remained intact.

“While COVID has dealt a devastating blow to our nation’s public health and economy, it also has led people and communities to think about who we are and what we do,” notes Aubrey. “The Land is calling people back, and Nashville’s Big Back Yard has an abundance of land, water and world-class music. We’re inviting folks to come and play in our big back yard.”

Despite the pandemic disrupting most people's lives, Mike believes if there is a silver lining, it’s how people are evaluating their lifestyle and prioritizing what's important.

“I think a result of the current events, is that people are reflecting on what they want their lives to look like over the next 20 years; how they want to raise their kids and how they can protect themselves moving forward. People are remembering how they grew up, they are longing for community, more space and self sufficiency. I think the answer is Main Street and rural America.”

Multiple stakeholders are aligned to move Nashville’s Big Back Yard initiative forward. The rural counties under the project’s umbrella have the infrastructure in place to support the quality of life many people appreciate, as well as the natural wonder and creativity they desire.

This incredible watershed region has an abundance of outdoor activities such as waterfalls, epic fishing,and unique historical landmarks. Music is the backbone of the culture here, and with the creative resources available in the nearby cities, the sounds that have been created in this region can be heard worldwide.

There has definitely been a shift in the way people do business and live their lives. The area between Nashville and Muscle Shoals is only one of the marvelous rural areas around the country, and Mike and Aubrey hope other areas will follow their vision by showing people all that small towns and rural life have to offer.

It’s evident Mike Wolfe is an idea machine, a creator, and has an overwhelming desire to improve small towns and rural communities. He still has many more miles to travel, so keep up with him and projects by following him on his social media platforms, visiting his website, and watching upcoming episodes of American Pickers.