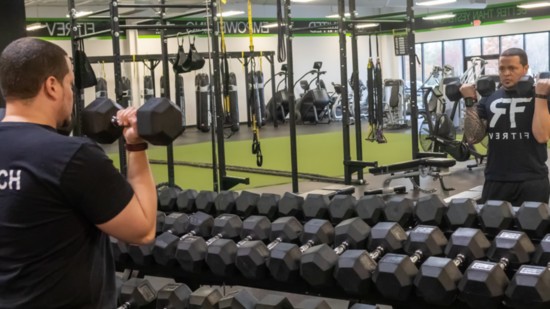 From the Battlefield to the Gym

Local health and wellness guru Jason Santiago is the owner of FitRev, a high-quality workout and training facility located in Hendersonville. Throughout his life, he has overcome a lot of adversity that has helped shape him into becoming a highly-motivated fitness entrepreneur.

What is your background?

I was born in Bridgeport, Connecticut, in one of the rougher areas of town. After graduating from high school, I wanted to go to college, but I couldn’t get any scholarship money, and my mom couldn’t afford to send me. As a result, I decided to join the Army in order to earn the money to pay for college through the delayed entry program.

A couple of years later, I was stationed at Ft. Lewis in Washington and subsequently deployed to Iraq. After I returned from Iraq in 2003, I applied for flight school training to become a helicopter pilot. After finishing my training, I spent the next several years flying Blackhawk helicopters in a variety of different duty stations ranging from Egypt to Afghanistan.

During 2013, I was injured during my second deployment to Afghanistan. After I returned to the United States, I was able to retire from the Army after 16 years of service.

How did you get into the fitness business?

After retiring from the Army, I needed an outlet. I was used to serving others, and I knew that I wanted to keep helping people.

So, I started training people to improve their health and wellness. Initially, I started doing personal training and teaching group classes. After a while, I came to realize that I have a gift for training. I was able to book private training sessions at a rate that was higher than any other trainer.

Soon afterward, I decided it was time to open up my own gym, and I started FitRev in Hendersonville.

I have always been surrounded by doubters. People not believing in me has been a common theme throughout my life. Growing up where I did in Connecticut, there were not a lot of opportunities, particularly for people who looked like me and had similar backgrounds. As a result, few believed that I would ever be able to amount to anything.

It’s been that way my entire life. People doubted me when I joined the Army, when I decided to fly helicopters, when I earned my MBA and when I started my gym.

Over time, I have learned to turn the doubt into personal motivation. Whenever someone tells me that I can’t do something, I just smile and dedicate myself to proving them wrong.

What is the toughest situation you have faced?

After I retired from the Army, I lost my sense of identity. For most of my life, I had been in the service, and I defined myself by my career as a helicopter pilot. Suddenly, that career was over.

As a result, I began to struggle with my mental health. I began to take different medications to try to help with the symptoms, but they only got worse. After a while, I realized that I needed help, and I began to reach out for assistance.

Eventually, I went to Veterans Affairs where I learned about a program called K9 for Warriors that provides specially trained service dogs to wounded veterans. During 2017, I was paired up with my service dog, Bristol. Since then, he has become my best friend. His presence has helped me to find the strength to heal personally and to continue to grow professionally.

Growing up, my mother was my inspiration. My dad died when I was only 2 years old, and I lost a brother when I was 6. She had to deal with those losses and find a way to raise her family despite being a single mom.

When I was in the Army, I was strongly influenced by a lot of the senior noncommissioned officers. They made me the man that I am today by instilling good values within me, holding me accountable and never letting me settle for anything substandard. Although they were tough on me, they were like father figures to me.

What are your most proud accomplishments, personally and professionally?

Personally, I am proud of many things in my life. Despite a tough background, I have been blessed to serve in the Army, earn my MBA and become an entrepreneur. These accomplishments have enabled me to be a mentor in Metro Nashville high schools and an ambassador for Tennessee State University, where I have been able to serve as a positive beacon in young minority men’s lives.

Professionally, the greatest honor that I have ever had was to fly heroes home from the battlefield.

What is your guiding philosophy?

I want my life to be remembered someday, not by how much money I made, but by how I made people around me feel. I want to give hope to others and let them know they are not alone.

People need to learn to believe in themselves, to understand that true personal gratification doesn’t come from what others think, it comes from inside.

We all have the power to define ourselves – don’t let others do it for you.

What is the most important life lesson you have learned?

As a young soldier, I had just arrived at my duty station in Germany when the attack of 9/11 occurred. Shortly thereafter, our commanding officer gathered all of the soldiers together and told us to prepare for going into combat. It was at that moment that I realized joining the military was not about college money, it was about going to war and our country and our way of life.

What is a bit of Jason Santiago trivia?

I love to play the harmonica. So far, I am only self-taught. However, if I ever find the time, I am going to find a good harmonica teacher to help me take it to the next level.

Too many people give up on fitness because they go to impersonal gyms that just want their money. These gyms don’t really care if their clients show up or not as long as they get paid.

At FitRev, we genuinely care about the health and well-being of each of our clients. We believe that if we do the right thing in taking care of our clients, the money will take care of itself. Our clients are our business.

We are focused on individual needs of our members. We get to know our clients, and we make certain that we introduce new members to our other teachers and members as soon possible so that they can feel like they are a part of our family.

Our trainers sit down with each client up front and help them develop fitness goals that are both challenging, yet achievable. We set interim goals so that our clients can see that they are succeeding.

Come be part of the FitRev family – give us 90 days, and we will change your life.