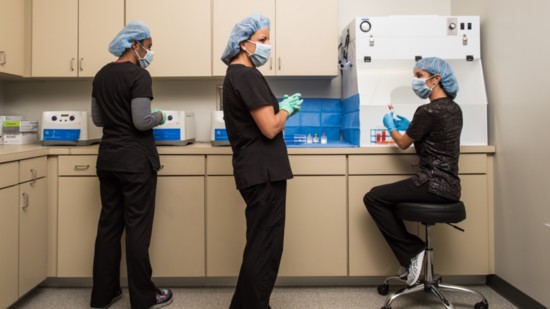 A joy as simple as sharing her children’s laughter in a pool of cool water eluded her. The pain was just too great. Five years ago, Kristen Featsent, mother of two, developed an autoimmune response to the topical steroids prescribed for her eczema. When she went off the steroid creams, topical steroid withdrawal or Red Skin Syndrome kicked in. Kristen, now 41, found herself in a vicious cycle. Her body rejected the topical steroids but, according to dermatologists, her body had to have them. The well-meaning dermatologists suggested a regime of immunosuppressant medication to allow for the continued use of the topical steroids along with antibiotics to help Kristen combat the opportunistic bacteria that would surely take advantage of her purposely weakened immune system. Each month her liver and kidneys would be tested for damage from this complex biochemical engineering project, but Kristen had had enough.

“I was smart enough not to go on immunosuppressant medication,” she says.

It would prove a wise decision, yet one that did nothing to mitigate her suffering.

“I was in so much pain,” Kristen says. “I felt like I was burning. Like someone was lighting a match all over my skin, mostly my arms. I even looked like a burn victim. The itching was so intense that I was almost in convulsions at times because it was such a deep itch, almost to the bone. I lived on Benadryl and baths, the only way that I could get any sleep.”

“My life revolved around vacuuming,” Kristen says. “Everywhere I would walk, it looked like it was snowing dead skin. I would wake up in a pool of dead skin on my sheets, vacuum them, and then put the linens in the wash every day.” And there was seemingly nothing she could do about it. Kristen was eating a healthy diet and taking homeopathic remedies, keeping out of the sun and wearing loose, cotton clothing. All to no avail. Her skin was regenerating bad cells and rendering her vulnerable to extremely painful infections with antibiotic-resistant “superbugs” that sent her to the emergency room five times in agony. Doctors would come to her and say, “What would you like me to do for you?” leaving Kristen even more distraught. If doctors had no idea of how to help her, how was she supposed to know?

But that is when serendipity did its serendipitous thing. A high school friend heard of Kristen’s condition, a friend who happened to have an older brother named Dr. Matt Wallis, founder of the IMAC Regeneration Center. Several years earlier, Dr. Wallis and medical professionals used historical studies to develop protocols for regenerative medicine, combining life science advancements in stem cells with physical medicine to create a conservative, minimally invasive and holistic approach to recovery and wellness. The introduction was made and, in March 2018, Dr. Wallis and Kristen spoke on the phone in what would prove to be a life-changing conversation. He quickly realized that Kristen’s immune system was not functioning properly, causing the autoimmune response to the topical steroids. The proposed solution for that was stem cells, the body’s “building block” cells with the remarkable ability to become almost any kind of cell the body needs. So, the medical team at IMAC got to work.

Kristen’s first treatment was in April, starting with stromal vascular fraction, a newer form of stem cell therapy, with the cells collected from her own fatty tissue. Her skin improved drastically, yet there was still a long way to go. Dr. Ian White, IMAC’s Chief Science Officer, his Ph.D. from Cornell University's Ansary Stem Cell Institute, suggested injecting outside stem cells collected from umbilical cord blood in a product named NeoCyte. Kristen received these cells in August.

“I improved within days!” she says. Two other doses of umbilical cord stem cells followed, and the good news kept getting better. “My feet and hands had been the main issues,” Kristen says. “Mostly my feet. It felt like somebody was always jabbing pins and needles into them. The stem cells soothed my nerve endings. No side effects. Nothing but goodness. I have a lot more energy and don’t feel like I have the elephant on my back anymore.”

The medical doctors at IMAC remind us there are no guarantees with any of these treatments and it is important to know that not all stem cells are created equally, yet Kristen’s saga is just one of the many success stories now coming in nationwide from IMAC Regeneration Centers. IMAC had more than 100,000 patient visits in 2018 at 11 locations. Locally, we have the David Price IMAC Regeneration Centers in Brentwood and Murfreesboro. What is being provided here is not some fanciful nostrum but the most advanced techniques of non-surgical and regenerative science. A recent search of “stem cells” through the National Institute of Health revealed nearly 7,000 clinical trials worldwide with more than 700 in Phase III.

“People sometimes look at it with a slanted eye,” Dr. White says. “But be open to how the body heals. We’re providing a service that isn’t invasive, has a quick recovery time, and eliminates the potential for dependence on opioids.”

More and more of us are becoming open to regenerative medicine. There is a growing realization that for certain degenerative health conditions—autoimmune issues, inflammation, orthopedics—non-surgical options for utilizing stem cells are superior treatments. This was certainly the case for Kristen.

“It was clear Kristen would benefit from the power of integrative medicine and the collaboration of a care team focused on her healing,” says Dr. Rhett Bergeron after their initial PCP consultation. “My functional work, in combination with regenerative medicine from IMAC, put her on a path of full recovery. Stem cell therapy is one of the newest scientifically and clinically proven tools of healing—it evidences that we have been designed to heal.” In addition, there is an increasing awareness of the dangers of surgical solutions and a heightened desire for non-opioid pain treatments.

The IMAC Regeneration Center helped Kristen, providing her with a gentle option for a better quality of life.

“We’re fortunate to have these non-surgical, non-pharmaceutical treatments to help patients like Kristen,” says Dr. David Smithson, an IMAC medical doctor. “Instead of just treating symptoms, we can now help to correct the underlying disease.”

On a recent trip to Disney World with her two children, now ages 7 and 9, Kristen walked around the Magic Kingdom in a tank top, shorts and flip-flops, a simple pleasure that would have been impossible less than a year earlier. Her daughter, who was only 2 when Kristen’s ordeal began, had never known such a fun mom. At the hotel pool, Kristen got in the water with her kids for the first time in years.

“It’s been amazing these last few months,” she says, her voice cracking with emotion, “to see the light at the end of the tunnel. I can’t thank Matt and Ian and all the IMAC team enough.”