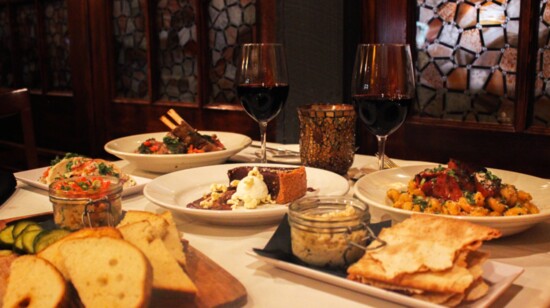 Winter Garden is known for a great downtown with some wonderful eating experiences, three of those experiences are owned by a Winter Garden power couple, Kevin and Laurie Tarter. I sat down with them to discuss their history and journey toward their great success. Thirteen years ago they opened their first restaurant, the Chef’s Table at The Edgewater. The restaurant began with a small space at the historic Edgewater Hotel, boasting an intimate dining experience with only nine tables in the modest yet elegant dining room. Their success was nearly instant and within a year, they were able to grow their space to sixty seats and by 2011 they opened the Tasting Room, a separate experience powered by the same incredible kitchen. Their third Winter Garden endeavor is the Attic Door across the street which is a very nice lounge-style wine bar also serving delicious foods.

However, Kevin and Laurie did not always have plans to be local restaurant entrepreneurs, indeed when they moved to Winter Garden in the early 2000’s they saw a city that was not doing very well. Although the West Orange Trail had already come through the downtown area, and while they instantly fell in love with the city, its current glory was still some years away.

“We had no idea we would be opening up a restaurant here at all, but we just knew that we loved Winter Garden, the bike trail had just come through, but it was a completely different landscape than what we see today. We never imagined downtown would have all the things it has now, but we are very glad to be a part of it”, explained Laurie.

Kevin went on to explain that when they moved to the area nearly twenty years ago, there were only about three places for food, the MoonCricket Grille, a pizza place, and a little deli. Growing up in a small town, south of New Orleans, Kevin’s dad would often cook big meals and the family relished in large mealtime gatherings. However, his father was not a cook by trade, he was an offshore contractor for a Gulf oil company, the industry Kevin was pursuing. That was until the oil market went into a tailspin during the 1980s Oil Glut, resulting in the decimation of that industry’s economy for years.  Facing career uncertainty, Kevin was unsure of the path for his future, during this time he was working in restaurants when the owner of a Chinese food restaurant offered him a cooking job. He took the work and eventually this restaurant owner would sponsor Kevin to go to culinary school in New Orleans. The program was exclusive and only took thirty-two students a semester, it was an apprenticeship program where the student would go to school one day and the other day would work at an actual restaurant. Kevin’s apprenticeship took place at Arnaud’s, the historic New Orleans fine dining restaurant which was founded in 1918.

“It was a great place to cut your teeth as a young cook and it was still that militaresque style. Chefs from France and Germany that used to dominate the landscape were running it and you know, they screamed and yelled… it was like a baptism by fire. They wanted to find out if you were going to be able to make the cut, giving up your Fridays and Saturdays, holidays, and nights while your friends are all partying. It's a big commitment to get into this business,” reflected Kevin.

Kevin would soon find himself on the opening culinary team at Disney’s Grand Floridian in 1988, a move that would not only further instill his passion for the industry but would also lead to an even more important life-changing engagement.


During that period, Laurie was separately enjoying a journey of love for the restaurant industry as a server and passionate professional in the “front of the house” side of the business, the portion of the restaurant business that deals directly with the guest face to face.  Starting as a server in Tampa straight out of high school, she loved everything about serving including a passion for good food, good wines, and good people. She was a bit dismayed at first when people would question her about getting a “real job”.

“I was always confused by that, I was thinking ‘well, I make great money and I really like what I do’ yet I kept hoping for another career because everyone tells you, ‘you have to get a 9-5 job … you’re not grown up until you get a 9-5 job’. Then when I began working at California Grill, I walked in and saw I was at a restaurant where I was not one of the smartest on the floor. There was so much to learn about wine and food and I thought to myself, that this is my time to become a true professional,” explained Laurie.

She mentioned that she loved front-of-the-house service so much that she never had any ambition to be in management or to own her own restaurant. That was until she and Kevin finally met, at the constant and very passionate urging of a mutual friend. After months of prodding them to go on a blind date together, their friend finally succeeded in getting the two to meet. Laurie recalls the moment when she first met Kevin, “I looked at him and I had never in my life felt like I knew someone’s soul, in the way I instantly felt his. It was like my soul recognized his soul.”

Kevin introduced his desire to eventually own a restaurant and Laurie insisted that he learn and create a passion for the front-of-the-house side of the industry. Kevin indeed became proficient with the front of the house and by 2008, now being married for some time, they opened their first restaurant together, The Chef’s Table- a farm-to-table gourmet cuisine restaurant that offers a fixed course fine dining experience. Everything they do is fresh and nearly all homemade from scratch, all the way down to the stock. One of their current entrée items is a delicious house rubbed pork ribeye and for the most popular appetizer, one must try the famous mushroom and chive crepe torte. If you are interested in wine, there are perfect pairing options readily available.

When they first opened it was just Kevin and Laurie with one cook, they eventually hired another cook to help while they ran the dining room. Since that time, Kevin and Laurie enjoy coming in to check on things and meet guests but now have an outstanding team running the day-to-day and creating the fresh menu items.

This team also runs their second restaurant, the Tasting Room - a more casual option, perfect for enjoying small plates, craft beers, and a full bar. Not well known to Winter Garden residents is that they recently have been offering guests to select full menu items from the Chef's Table à la carte into the Tasting Room. This offers a new great option for families, including those with young children, to enjoy all the great food selections offered by Kevin and Laurie’s team.

For something even more casual and a bit livelier, often with live music, is the Attic Door across the street. The Attic Door was acquired by Kevin and Laurie just a couple of years ago after buying it from their good friend, Lori Gibson, who owned and operated the Winter Garden hotspot for fifteen years. The Attic Door has a fun atmosphere with mixed-matched comfortable furniture as well as dining room tables. In addition to the classic wine bar-style food of sliders, cheese plates, and Mediterranean plates, they also serve a popular sizzling shrimp among other fork and knife items. However, the most popular item currently being served at the Attic Door is a special family recipe Kevin has introduced, the Meatballs & Polenta which is house-made beef and spinach meatballs with a two-day homemade tomato gravy served over hot and delicious polenta.

When describing their values and principles to me, Kevin and Laurie explained how they truly believe in treating their staff like family. Laurie added about the guests, “We want them to know they're valued and that their needs are something we want to take care of. We believe in treating people how you want to be treated.”

To this Kevin continued, “We also have a responsibility. This is our hometown now, we put roots here… we can’t face people day in and day out if we are serving a subpar product. That’s why we make everything in-house. I could buy stuff pre-made, but we do not believe in taking the easy route. Everything we can, we make here because we can control it and we're confident in the outcome and how it's going to be perceived.”

Personally, I can attest to the truth of all these comments. My wife and I have been to all three of their excellent establishments multiple times and for our recent anniversary in April, we visited the perfect place for a special occasion, Chef's Table at The Edgewater. The atmosphere is always intimate and beautiful, with an exciting ambiance being in view of the bustling kitchen where they are preparing the most superb food in all of West Orange. Kevin and Laurie make it possible for Winter Gardeners to speak proudly about yet another “best” this city offers, “Best in Food!”