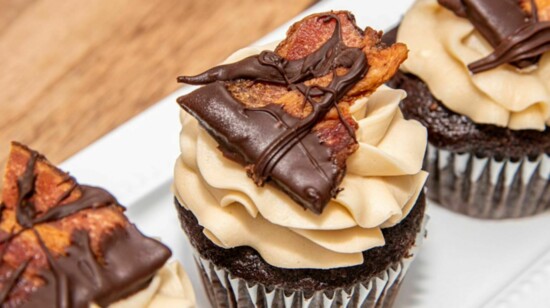 What is SugarBomb? SugarBomb is the delicious creation turned business of Newtown’s own Stephanie Eubanks. Stephanie turned her own creative hot chocolate bombs into a new bakery business that recently hit the Newtown sugar scene. The bakery will be armed with seasonal hot chocolate bombs and cupcakes, as well as specialty cakes.

A Virginia native, Stephanie has called Newtown home for the past 12 years since following the love of her life, Matt Eubanks, to our town. It didn’t take her long to get immersed in Newtown life by becoming a Deacon in a local church as well as a member of Next Gen Rotary Club.

Stephanie says she feels like she has always been in a kitchen, watching, learning and eventually creating - beginning at age 3!  She began learning simply by watching and sitting with her grandmother when she cooked for her family when she was very young. Later, her father started to really teach her how to cook which ultimately led her to work in restaurants most of her life. This path had Stephanie working as everything from a waitress and bartender, to a prep cook and then chef.

Stephanie has had several mentors throughout the years that extended beyond her family circle. She worked for Barley Sheaf Farm’s executive chef Josh Homacki as a breakfast chef, while Melissa Wieczorek and Theo Petron of Zest Culinary introduced her to the world of personalized food service. Stephanie loved the food service business and was inspired to continue to learn and grow in it. However, following the birth of her daughter Ava, there was one thing that kept nagging at her that led her to leave the fast-paced business; work-life balance. Stephanie loved cooking and serving, but she worried that she wouldn’t be able to do what she loved and take care of who she loved. Stephanie took a step back to raise her now 7 year old daughter.

It was while creating something magical for Ava and other family members at Christmastime, that Stephanie had the idea to make her own way and forge her own path. She began making hot chocolate bombs that were such a hit, she started experimenting with additional sweet treats, finding a passion in developing a full line of bakery goods….and with that, SugarBomb bakery was born. Some of her signature treats include The Chocolate Pig, a chocolate cupcake infused with bacon and topped with maple buttercream, and a seasonal Lemon Sunshine cupcake which is a vanilla cupcake filled with freshly made lemon curd and topped with vanilla buttercream (yum and more yum!). Launching SugarBomb, Stephanie has found a way to create and serve others on her own time and still give her best to her own family. She truly believes that “everything happens for a reason and this is my time to shine”. She has faith that she will make a success of her own business in the industry that she has been surrounded by her entire life - a business that was inspired by her love and care for her family.

Her faith and hope for the future of SugarBomb is infectious and we believe Newtown is in for a real treat!