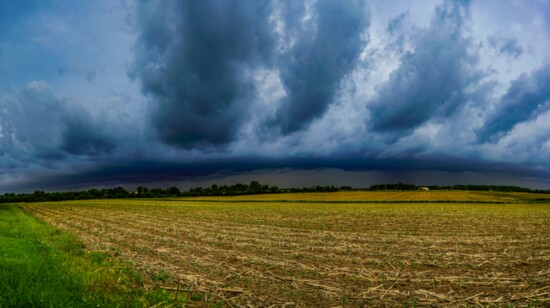 'Eye' of the Storm

Hurricanes, tornadoes, thunderstorms, damaging winds… Although we usually associate summer with blue skies and sunshine (and along the east coast, excessive humidity and bad hair days), June and July are actually the most likely months to bring us severe weather events. This happens because of higher amounts of convective activity (rapid changing of atmospheric molecules) during the summer compared to late spring or other seasons. Alexandru Bruschini (Brandon) knows this well, and in fact has made a career of tracking these natural phenomena. A Yardley native and a graduate of Penn State’s meteorology program, Alexandru works behind the scenes to predict the area’s ever shifting weather patterns, which is no easy feat. In fact, the Delaware Valley is one of the hardest areas in the nation in which to predict weather because of variable seasonal temperatures, winds, bodies of water and varied terrain. The large ground fluctuations of the Delaware Valley and the rolling hills of the Piedmont combined with the sharp cutoff at the Delaware River that separates the hilly Pennsylvania terrain from the flat land surface (plateau) found in New Jersey makes this area a prime location for upper level wind disturbances. Throw in the ocean wind from the coast and the differing wind currents over the mountains, and the only thing that is predictable is the unpredictability of wild weather striking where we least expect it! It comes as no surprise then that Pennsylvania averages about 16 tornadoes per year, per the National Oceanic and Atmospheric Administration (NOAA), with thunderstorms, high winds and flooding also a frequent theme in our summer experiences.

With severe weather becoming more common in this area and throughout the country, Alexandru’s role has expanded beyond the Delaware Valley, as he now serves as a member of the U.S. government’s Natural Disaster Team. Working in natural disasters took Alexandru’s career in a direction he hadn’t anticipated. He had always enjoyed photography as a hobby, but his new role allowed him to blend his two talents. Covering tornados, wildfires, floods, hurricanes, severe thunderstorms and Nor’ Easter impact zones across the U.S. and beyond, Alexandru finds himself perpetually on call to rush to the scene of an impending disaster area when a storm hits to collect information and document destruction photographically. The assignments keep Alexandru on his toes, and his cameras fully charged, “Pre-pandemic, I was travelling over 300,000 air miles a year to pre and post natural disaster points. I have seen the nation by car, boat, plane and train, coast to coast, island to island, desert to farms, with the Rocky Mountains in between”. Once on site, Alexandru’s days are spent capturing the landscape of the world through the lens of a camera or drone, often while flying in a helicopter or from a unique perspective on the ground, holding a Surface tablet on his lap to distinguish various situations while collecting and analyzing data.

Although the work can be intense at times - during peak storm periods, Alexandru works 14-20 hour days, and can sometimes put him in precarious situations, including tumbling down the side of a 20 foot cliff while tracking wildfires, the job has impacted him in ways he never imagined, “I’ve learned to take every day of my career with much gratitude that I have the ability to help others after a disaster strikes. I can see the world, and experience different cultures, but most importantly, I can be there for a person, family, town or city when people's hard work and dreams are extinguished by a disaster.” One of the most dramatic scenes he has covered was the 2019 hurricane in the Bahamas. “Flying in over the island and seeing the complete devastation was very emotional. I tell people every day, be happy for what you have. Count the blessings that you have a roof over your head, clean water, green grass, and an interstate to drive on. When a disaster hits, it reminds us that we have a lot to be thankful for.”

For more on Alexandru's photography: