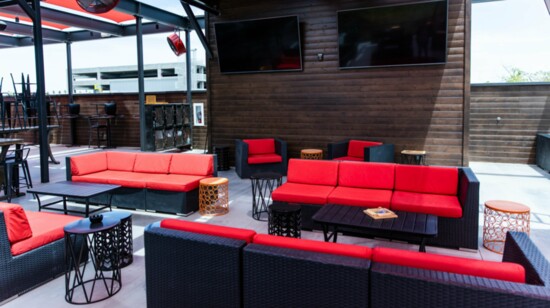 The additional space and installation of new restrooms, plushy seating, and 360-degree misters to keep everyone cool would’ve made for a fantastic improvement on an existing fun site.

But, when The Perch Pub & Brewery owner Rebecca Lavenue decided to renovate the rooftop lounge of her beloved Downtown Chandler hotspot, she decided to go the extra mile.

And this is why a 1957 Grumman side step van sits on the roof, stylishly blending in with the contemporary setting. Lavenue had the vintage vehicle—which had been used as a bread delivery truck—craned on top of her brewery. She transformed it into a food truck to service the now 418-person capacity lounge.

Lavenue talked about having the truck gutted, the bottom removed, installing kitchen equipment, running gas lines to it, and all the finishing touches needed to complete the van’s revamping so staff could churn out the mouthwatering tacos, bruschetta, meatball sliders, and house-made chicharrones served with green harissa to hungry customers.

Fortunately, it was drivable so she could get it to the brewery.

“I looked to find the right vehicle and I thought this looked like a VW bug… cute,”  Lavenue says. “It sounds crazy. I admit it was a little extreme.”

But after two years in the making, Lavenue deserved to go all out on her new rooftop bar, and her patience has been rewarded. Known for its thirst-quenching, palate-pleasing brews crafted on-site, as well as being a rescue haven for more than 50 vibrant tropical birds, The Perch has been a crowd-drawing attraction since opening its doors in 2014.

The rooftop expansion had been much needed for a while to accommodate the growing number of beer and bites fans flocking to her bar.

“It was packed all the time. We really just needed more room. The demand was definitely there,” Lavenue says.

In addition to adding the food truck kitchen and more than doubling the original seating capacity, at 6,000 square feet, the space has tripled. Four restrooms exist where there were none previously.

The very open concept flaunts 60 taps of Perch’s famous beer, and a bevy of games including Jenga, darts, and video games. An expansive stage sets the scene for live music five nights a week, and more misters and a massive swamp cooler above the bar ensures patrons are comfortable year-round.

Laser-cut stainless steel panels surround the roof, offering a stunning display as the sun rises and sets, sending rays artistically through the beams. It’s a picturesque complement to the rooftop’s natural panoramic views of Downtown Chandler and lush garden landscape in the courtyard below.

“Everyone tells me it’s gorgeous,” Lavenue says. “People tell me it’s like Vegas or Scottsdale moved to Downtown Chandler.” PerchPubBrewery.com