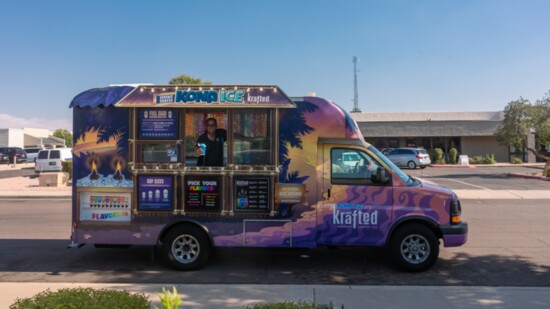 Mike Rendelman has been dealing in ice for decades.

“Albeit, two very types,” says Rendelman, who worked in the diamond wholesale industry for 15 years before investing in a Kona Ice Truck in 2012.

At the time of his investment, his was just the 600th Kona Ice Truck nationwide.

“Today there are 1,600 U.S. trucks, plus carts and other ancillary Kona products,” says Rendelman, who today owns four trucks and one cart. “The secret to our success is never skimping and always putting community first.”

By “never skimping,” Rendelman is referring to the quality of the product. Neither a slushy nor a snow cone, Kona’s shaved ice is inspired by the iconic snowflake-like treat from Hawaii, which manages to hold its shape as well as its flavor, somehow without it sinking to the bottom of the cup. The brand also develops and manufactures its own flavors for its franchises, engineering them to have less calories than typical sweet treats, yet without a laundry list of ingredients.

“And when I say we put community first, I mean we not only partner with causes near and dear to our hearts, but that a portion of every penny we make is reinvested directly in our own backyards,” says Rendelman.

For example, when Rendelman signs on to visit a school, youth sports camp, or nonprofit event, he donates up to 20% of sales back to said group.

“Because we are totally self-contained, meaning we don't need a point person from a school or organization to find us volunteers or even electricity, we are also a no-hassle fundraising option,” says Rendelman. “We are completely self-contained and turnkey by design.”

Among the organizations that have benefited from Rendelman’s Kona Ice trucks beyond the hundreds of schools, religious groups, and youth sports programs are Phoenix Children’s Hospital, Arizona Helping Hands, and Arizona Diamondbacks Foundation.

“It is so nice to be part of something, well, nice. And, that it’s a family affair,” says Rendelman, who with his wife, Sharon, have four children ages 13 to 31.

Daughter Lainey, 17, has been working for her dad since she was 15. Over Father’s Day, in fact, she used her tips to treat mom and dad to The Greene House.

“And while my youngest, Riley, isn’t old enough to work with us yet, she proclaimed herself ‘Spoon Manager’ at age 6 due to her passion for passing out our little spoons to other kids whenever she would visit me at work,” says Rendelman.