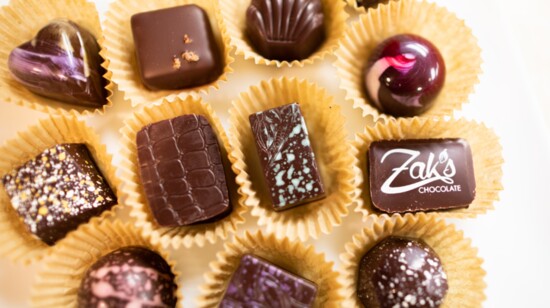 Perhaps it was the surplus chocolate that her candy box maker grandfather brought home from the shop.

Or, it may have been the family fudge recipe grandpa passed down to her father.

“That was always a special treat,” certified chocolatier Maureen Elitzak recalls of the impressionable fudge confection she cherished as a child.

In either case, the inner chocolate lover seed—or bean—was planted. It exponentially grew and resulted in Zak’s Chocolate, the artisan shop Elitzak and her husband, Jim, opened in 2015.

Since then, the certified public accountants-turned-chocolate masters have gained a sweet following among consumers, as well as local producers, who use their wares as ingredients—think AZ Queen Bee Honey that makes a chocolate creamed honey with Zak’s cocoa powder, and Iconic Cocktail, which uses Zak’s in its Cocoa Nib Mixer.

“The local collaboration is one of the most fun things you can do,” Jim says.

It’s clear that Elitzak and Jim are having a blast churning out bars, bonbons, and truffles to a sea of enthusiasts. They speak passionately about the art of transforming a humble cocoa bean into the unique concoctions that distinguish theirs from the pack.

Many of us have walked into a chocolate store to witness employees standing behind a glass case fashioning chocolate into a perfect ball or other fancy shape. If the person hovering over the chocolate is asked, it’s common for them to respond that of course all chocolate is made in house.

They’re not lying. However, chocolate shops purchase commercially prepared chocolate from another company and does with it what they wish to make their products. That’s what passersby see.

And here is where Zak’s has an edge in the authenticity department. The Elitzaks’ process starts with raw, ethically sourced cocoa beans from farmers in cacao growing regions around the world.

From there, the beans are roasted, ground, and transformed into signature single-origin and proprietary house blend chocolate to use in dark, milk, and white chocolate bars and other confections. Everything is done by hand, from sorting cocoa beans to handcrafting pieces to wrapping the bars.

The process melds art and science to give Zak’s (ZaksChocolate.com) its own specific style, similar to what winemakers do with grapes to make the finished product their own.

So, they make their own chocolate. From scratch. Literally.

“We have the ability to finesse that and create something that’s uniquely ours, where other chocolatiers will buy chocolate and create from there,” Jim explains. “It doesn’t make ours better. It makes ours very different.”

The Elitzaks are in the business of chocolate. But for 20 years, it was Elitzak’s hobby.

When their daughters were young, she made chocolates for their teachers and coaches. She also made them as gifts for family and friends. During the holidays, the kitchen was converted into her own chocolate studio.

She always used as many organic ingredients as she could find. When the independent bulk chocolate vendors she trusted got bought out by larger corporations, Elitzak researched making chocolate from organic cocoa beans herself. Over time she found machines that were more user-friendly—and a lot less messy—and found her groove. She and Jim explored flavors and profiles of beans from specific regions, experimenting with the cherry nature of Madagascar beans and the honey raisin finish flaunted by beans from Belize.

Eventually, their chocolate made it into the hands of chefs, who declared it so good that they should sell it.

At the time, the couple craved a change from their corporate finance careers. The encouragement nudged them to indulge it.

“For both of us, it’s an artistic outlet. It’s more creative than our previous jobs and we’re playing with flavors and designs… the stuff we liked to do at home,” Jim says. “We thought, this is fun. Let’s try this.”

That effort was delicious success.

Jim talks about a note he recently received from a customer letting him know that Zak’s chocolate is among their family Christmas traditions. This kind of feedback never gets old.

“We’re constantly surprised and amazed when people say they really like this,” Jim says.

“It’s always fun to give a gift to someone and hear them say that it is so good. We’re just doing what we enjoy and it’s great that people appreciate what you’re doing and they enjoy it as well,” she says.

Do they ever experience cocoa fatigue? Absolutely not. But they aren’t your typical chocolate consumers either.

That changed during the holidays.

They brought home a couple of pieces to enjoy at the end of the night. One was the new blackberry cardamom bonbon. It was designed to pair with full-bodied red wines, which is a common pairing inquiry from customers.

Jim followed the advice he gives customers: Eat slowly and let that first bite melt in your mouth, allowing every luscious and delicate nuance leisurely roll out on the palate.

“We opened the box like people probably did at Christmas. We took that first bite like they did,” Jim says. “And it was really nice.”