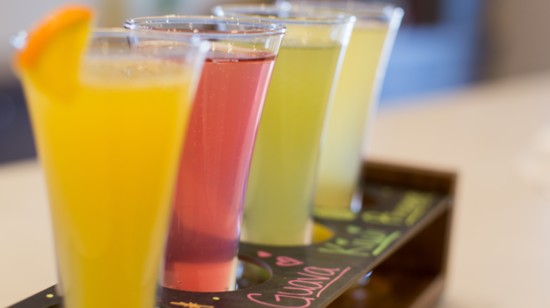 Chandler welcomed its newest restaurant, which is already making quite a splash in the community. Brunch hot spot Hash Kitchen boasts an expansive menu, mimosas, imaginative cocktails, a massive Bloody Mary bar, and turntables. It’s brunch-a-tainment—brunch and entertainment all rolled into one.

Joey Maggiore is the innovative chef behind Hash Kitchen, which he founded with his wife, Christine Maggiore—although the entire family is in the industry. “My wife and I also own The Sicilian Butcher, and my father, Tomaso Maggiore, has Tomaso’s and Tomaso’s When in Rome,” Maggiore explains. “My sister, Melissa Meyer, has a restaurant in California called Tommy V’s Urban Kitchen, but she’s moved to Arizona and is looking to open another location here and she’s helping out with our father’s business.”

He says family members, along with partner Flora Tersigni, walk into each other’s restaurants to help, as all the restaurants are part of The Maggiore Group of restaurants.

There are two Hash Kitchens in Scottsdale, and the Chandler location follows the same design and whimsical appeal. In choosing a Chandler location, Maggiore did his research. “We saw there was a big missing gap for an amazing brunch concept,” he says. “When I found the location and saw the families and how dense the population was in the area, we were excited to put it there.”

The Hash Kitchen menu is as fun and engaging as the restaurant’s décor. Maggiore handles the menu development for all The Maggiore Group concepts, and the menu evolves slightly every 90-120 days.

Naturally, Hash Kitchen is known for its namesake entrée. “Our hashes are amazing,” gushes Maggiore. “Our Carnitas Hash is so good and it outsells the others.”

The creativity doesn’t stop with the hash options. The heavenly Build-Your-Own Bloody Mary bar includes nearly 50 craft toppings. Mimosas and specialty bottles like Veuve Clicquot and Dom Pérignon are on the menu, plus specialty cocktails like Fruity Pebbles, Cocoa Puffs and Cinnamon Toast Crunch cereal shooters. If a guest is really feeling the scene they will want to order the Mocha Frappuccino cocktail with a large pressed cotton candy garnish, served in a shimmering disco ball.

“In Chandler, we really wanted to step up our alcohol and bar scene game,” explains Maggiore. “We want the wow factor, and our mixologist Sheldon Wiley does an amazing job.”

Building on the wow factor, Hash Kitchen features a DJ each Friday through Sunday, as well as holidays. Maggiore says, “Anybody can do a brunch place. To be really out-of-the-box we needed five or six key elements, and two of those elements are the music and the vibe.”

The entire restaurant exudes a fun social media-friendly atmosphere that lets guests of any age get in on the fun, and the food and ambiance photo possibilities are endless. A couple more Hash Kitchens are planned for Arizona before expansion into Denver and Dallas.

“What I really loved about opening in Chandler is that it is very pro-business, obviously,” Maggiore says. “But, the open arms we had from city councilmembers was amazing. Hash Kitchen guests are excited, and we see locals over and over and that’s a really heartwarming feeling.”