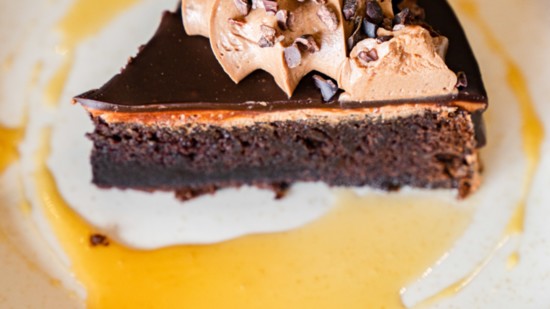 Life in the Sweet Zone

Ask L.T. Smith whether his current job as the head pastry chef at Tempe Public Market Café shares similarities with his former life as a football player and he enthusiastically spouts off a list.

When L.T. walks into the kitchen, it’s like walking onto the field. It’s the venue where magic happens by a team of trained professionals. The cultural aspect is what they both share.

“When you’re running service, you’re basically running plays. When they’re calling out (orders), it’s the same as a quarterback calling a play… You’re in an arena, you’ve practiced, and now you’re doing it,” the former wide receiver says. “But every service is game time so there’s really no practice time.”

For the last five months, L.T. has had his game face on at the revamped Tempe Public Market Café.

L.T., who was the chef at the Café’s sister restaurant Ghost Ranch, was asked to helm its pastry division when it reopened after renovations earlier this year. The restaurant features a larger pastry case to showcase L.T. and his team’s wares.

L.T. was trained at the Arizona Culinary Institute and started his career doing savory dishes but was always interested in the sweet side of the craft. Now, he is embracing the opportunity to flex his creative culinary muscles through various cakes and cookies with design and flavor. The lineup includes maracons, cakes, muffins and breads, along with vegan and gluten-free options.

L.T.’s playful side is exhibited in recipes for treats like cookies with a kick, thanks to a pinch of chile in the mix.

“My style is rustic elegance and occasionally whimsical,” he says.

A native of Painesville, a city about 30 miles northeast of Cleveland, Ohio, L.T. was a standout high school football player and started cooking meals that emphasized sports nutrition and enabled his body for the competition he faced. He was awarded a football scholarship to the University of Akron. He continued to cook for himself and during the holidays, his home was the gathering spot for friends.

“That’s when I started to enjoy hosting and the aspect of feeding others and connecting that way through food,” he recalls.

L.T. played briefly for the Indianapolis Colts. He departed the team and moved to Arizona, moving near Chandler Fashion Center, a locale with easy access to work and Arizona State University, where his sister who lives with him goes to school.

“I enjoy it quite a bit. There’s plenty of stuff to do and [it’s] close to all of the places you want to be,” he says. “It’s a really good community.”

If the thought of an athlete accustomed to the physicality of a tough sport trading in his helmet and pads for a piping bag and buttercream makes you pause, you’re not alone.

“People are sometimes like, ‘Oh yeah, you’re a football guy and now you’re doing some dainty pastry stuff?’” he says while laughing. “But I enjoy the art and creative outlet I have through pastry. Cooking gave me a new passion when I was done with football.”

But L.T., who aims to one day have his own restaurant or bakery, can’t help but explore the commonalities between his two seemingly polar opposite careers.

“I enjoy coming to work and being with my team every day. That sense of community and loving what you’re doing is a huge thing,” he says. “It’s also like I’m competing with other chefs. I see what they’re doing and try to up my game a little bit… (but) I guess I’m really competing with myself.”