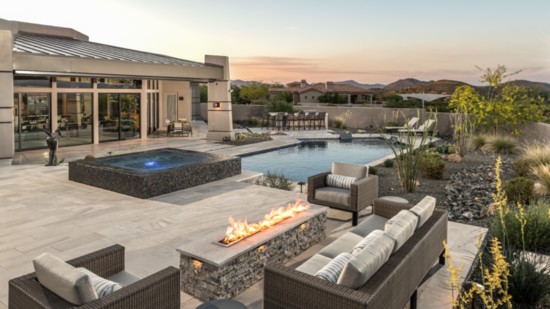 The Rise in Popularity of These Stunning Backyard Elements

Jeremy Smith, the owner of California Pools & Landscape, has seen a rising popularity of zero edge spas. They differ from the traditional variety for several reasons, but perhaps most notable is the aesthetics. Water floats over its edges into a hidden trough, giving the illusion of a vanishing edge. They can also be built above ground, creating a waterfall feature as water flows into the channel below.

“It looks really great with high-powered LED lights going around the whole spa. It’s spectacular,” Jeremy says. “We’re kind of geeks when it comes to spas. People can use them year-round and we like to trick them out, make them different.”

A positive to zero edge spas is the freedom of design. They don’t have to sit right on the pool, therefore creating a destination area elsewhere. Also, the pool’s equipment can be used for the spa, eliminating the need for a separate system.

“I can take that water in the trough and circulate it back into the pool,” Jeremy explains. “Some people like to separate the spa from the pool, and the zero edge concept makes that more economical.”

Zero edge spas are often used as a decorative feature, as well as a place to relax. According to Jeremy, users are more comfortable because their arms are always submerged with the water level up to the edge and there’s no deck hitting them at the back of the head.

California Pools (CalPool.com) has created outdoor living spaces for 31 years and is fully licensed to build backyard spaces from outdoor kitchens to bathhouses.

“This is a great example of an overall backyard,” says Jeremy. “You can tell on that particular project they don’t have water features. The spa is the focal piece and the water feature.”

This is truly the quintessential zero edge spa, with all glass tile making the light inside visible. The home itself has many windows, which seamlessly merges it with the outdoors.

The outdoor kitchen and seating area create additional living areas for the family.

They used small glass tiles around the spa and placed them vertically to create a smoother, rounded look. This spa doubles as a water feature, adding ambiance with the sound of the water as it flows over the edge, hitting the trough below.

This spa is framed with the fire pods that fill with water, and after dark, it’s lit by LED lights, bathing the water in light all the way up to the edge.

The customer who built this spa wanted an area where the family could enjoy time together and have movie nights from the comfort of the water.

The swim-up bar is accessible from both locations and there are stools on the other side for non-swimmers, as well.

This was a remodel. California Pools & Landscape did some work to the pool, added new decking, fountains, a BBQ, and the zero edge spa.

Instead of tile, this spa is surrounded by concrete cladding. It sounds like rain when the water trickles down the sides and into the basin below.