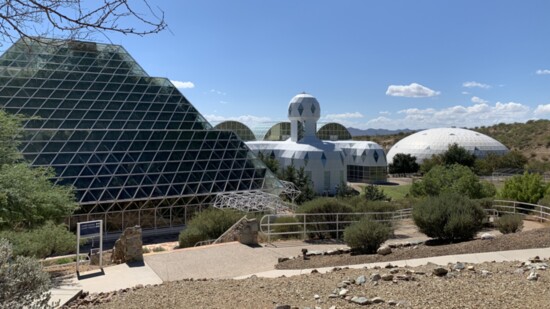 A Marvel in the Desert

Just 20 miles north of Tucson lies a place called Oracle. It is there where, in 1987, construction began on a sophisticated model of planet Earth. Once constructed, it would be considered one of the 50 must-see wonders of the world (Time Life Books), and draw both researchers and visitors from around the world.

But though there are now daily tours available, it wasn’t always open to the public.

Biosphere 2 was created with a mission to serve as a place of research, teaching, and learning about the planet, its living systems, and its place in the universe.

It was designed to be a marvel in the desert; a science experiment like no another. Here, 3 acres of biomes under a glass roof form a living laboratory; a closed ecological system with a mature rainforest that houses more than 90 tropical tree species, an ocean with a coral reef, a savanna grassland, forested swamps with mangrove trees, and a coastal fog desert.

It is the largest earth and environmental laboratory, offering a place to study how ecosystems respond to changes in temperature, moisture, and more. It was the largest attempt—and is still the largest facility—that was designed and constructed to understand, in part, how earth systems function.

“The mission of Biosphere 2 is to advance our understanding of the natural and man-made environment through unique experimentation, training of interdisciplinary scientists, science education and public outreach, and organization of meetings to address grand challenges that affect the quality of life and the understanding of our place in the universe,” the website explains of its mission.

Why was it built in Oracle, Arizona? The area’s 200 sunny days and relatively stable geologic area (no earthquakes) were the main draw, offering stability to the destination and its large glass structure.

Biosphere 2 was built with the biomes and living spaces, and technical infrastructure built under the facility.

Beginning in September 1991 through September 1993, four men and four women lived closed in at Biosphere 2 (named “2” as the Earth itself is considered the first biosphere) for a much-publicized closed-system experiment, testing a sustainable planetary ecosystem. For various reasons—including low food and oxygen—it failed. Still, researchers did glean insights from it.

A second mission was held in 1993, and then, throughout the years, Biosphere 2 changed hands.

In 2007, the University of Arizona (UofA) assumed management of Biosphere 2, “with a vision of understanding complex environmental systems by engaging both the scientific community and the pubic, integrating large-scale experimentation with computational modeling and advancing awareness of the environmental and resource challenges.”

In 2011, UofA was gifted Biosphere 2’s campus and facilities.

Today, Biosphere 2 used for research by scientists from all over the world, as well as the public. Through 2019, it drew more than 110,000 visitors a year. The Biosphere 2 Experience is currently offered in-person, which takes visitors around the exterior and portions of the interior.

It’s a unique place to visit, as there is no other place in the world where the research and experiments that are and have taken place can be conducted. While you can study the rainforest, you can’t put the entire rainforest under glass—but here is one on a smaller scale, along with other of the Earth’s biomes. Biosphere2.org