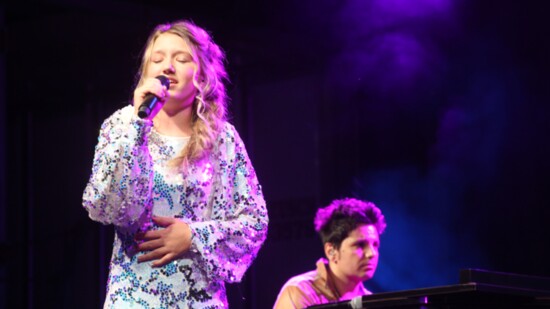 A Voice for Good

Rosevelt Sings Not Just for Fun, but To Impact the World

Rosevelt is just 14 years old, but her resume is already impressive. The Valley native’s career began when she met—and then sang with—Dick Van Dyke.

“I discovered my voice at age 9 when I had the opportunity to sing with Dick Van Dyke,” Rosevelt shares. “I’ve been singing ever since that day.”

That impromptu performance, which occurred when her dad, Jef, went to interview Van Dyke at his home and brought Rosevelt —who had grown up watching The Dick Van Dyke Show and Mary Poppins—with him. Jef asked Van Dyke if he could sing a quick song with her for fun.

The rest, as they say, is history.

“Once people heard that I sang with Dick Van Dyke, that opened a lot of doors to sing with others, and opportunities to perform,” Rosevelt says.

The young singer—who Chicken Soup for the Soul author Mark Victor Hansen said, “…is destined to become a gigantic superstar! At slightly over a decade, she is a mesmerizing platform professional that captures, inspires, and has every audience member fall in love with her, her music, songs, and talent”—sings a variety of genres, though her recent songs lean toward country pop.

As for who she would love to sing with if she had the chance, Rosevelt says it would be, “Lauren Daigle would be a dream, and so would Dolly Parton.”

Beyond just enjoying singing, Rosevelt shares that she’s drawn to it because of the messages that can be shared via song, such as Daigle’s “You Say” and “Rescue” and Andra Day’s “Rise Up.” She sings primarily for charity/nonprofit events, and uses her voice to bring attention to causes she’s passionate about, both via song and via actions.

“I’ve been a Childhelp Ambassador for about three years, and I love them so much for all they do to help abused and neglected children,” Rosevelt says about the Scottsdale-based Childhelp organization. “When I found out that five kids die every day, it broke my heart, because I have five brothers and I can’t imagine losing all of them in one day. It is so sad. That why I started the #5toomany fundraiser for Childhelp.”

The #5toomany social media challenge and fundraiser is designed to raise awareness that five kids die every day due to abuse, which is #5toomany. People place a heart image on their hand and post a photo to social media. They tag five friends to do the same, and then they donate $5 (or more) to Childhelp.

“I’m also the newest ambassador for Operation Underground Railroad,” she shares. “They help rescue sex trafficked children, and it’s unimaginable what happens to these kids. I want to help rescue these kids from the darkness and am honored to use my voice to help.”

Rosevelt also holds an annual concert called The Music and The Message to raise money and awareness for both organizations.

The young performer also recently launched her own record label. Called 5 Too Many Records, she is working on songs that will be released soon.

She also set a goal for herself to raise $1 million to help abused children.

“And, pretty soon, my dad and I are putting together a concert assembly for schools to teach kids how to ‘speak up and be safe,’ and how they can get help if they are in an abusive situation,” she says.

When she’s not singing or helping others, Rosevelt enjoys spending time with her friends and family.

“My mom and dad are a huge driving force of everything I do and are so very supportive and do so much to help,” she says. “My dad has been an actor and producer for 30 years and has a lot of connections, and he helps coach my performances. My brothers have been so supportive, and I love them for always being able to help.”

Rosevelt is excited for career and feels blessed to be able to use her voice for good.

“I’ve been blessed to come from a good home with good parents and when I heard what is happening to these children, I knew I wanted to help,” she says.