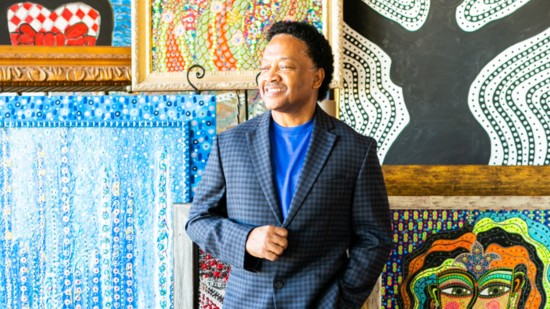 Artist Richard Retter Uses His Knowledge to Help Others

Artist Richard Retter has coupled his passion for art with a yearning to help those in need to put forth a philanthropic project that combines both.

“In 1993 I worked with Scottsdale Foundation for the Handicapped. The program’s director decided to make the art program a curriculum, so I started DRAW TOGETHER. We had many corporate individuals donate specifically to this program because they loved the work my students were creating and wanted to purchase the pieces,” Richard says.

In 2013 Richard wanted to branch out on his own. He began UNITED ART OF ARIZONA, an art program for adults who are artistic and special. It offers instruction that is highly productive and results-driven where artists learn the process of creating artwork from start to finish, as well as how to display and sell their art.

Another piece of the charitable puzzle for Richard began in 2014.

“Kit Kough, program director at Mayo Clinic Center for Humanities and Medicine, made me the resident artist at the Mayo Clinic. This program allows me to work with patients, bringing them art in lieu of physical therapy. Patients have taken to the program, as they see I’ve created an environment where they can express their feelings,” Richard says.

“It starts with Richards’s own art, which is so engaging. One of my favorite installs we did is a painting with an array of lines, color and activity. Without knowing the title, a volunteer said she ‘wanted to take the yellow roads.’ Sure enough, the painting is called ‘The Journey.’ That’s so telling of his work and how it engages people. We are really blessed with great culture at Mayo, and art was a seamless addition to our programs,” Kit says.

Mirroring this view is Director for the Office of Community and Business Relations at Mayo Clinic Marion Kelly, who was reacquainted with Richard after not seeing him since their college days in Kentucky.

“I was blown away by his art. I told him we have a huge center for humanities at Mayo, and I wanted him on-site. I also showcase much of his art in my own home. When you get to know him, you realize there are stories in him. He isn’t just painting a photo or scene, he’s telling a story.”

Richard’s background has led him to the success he has today and also to his kindhearted efforts in the community. His parents encouraged his dreams from their home in the Kentucky projects. When they finally moved to the suburbs, Richard’s fifth-grade teacher motivated him to enter an art contest that led to national accolades. He continued to evolve in his work through clothing design, creating winning pageant outfits, being represented in fashion fairs for Ebony magazine, and designing for socialites.

“I was always fascinated by his artistic abilities. I produced his fashion shows, and as a model, I felt his work rivaled some of the greats. His fashion work equaled his artistic work,” says James Williams, a childhood friend of Richard's.

Now a resident of Arizona, Richard says it feels surreal sometimes, but his journey has led him to personal success and the ability to encourage others.

“I have seen the impact Richard’s work has on the lives of his students. His patience and dedication and their growth as artists and individuals are incredible," says business associate Richard Onsager. "Through their art and his instruction, they feel empowered. It gives them a sense of accomplishment and the knowledge that they can contribute meaningfully to the community. He and his art have touched the lives of countless people.”