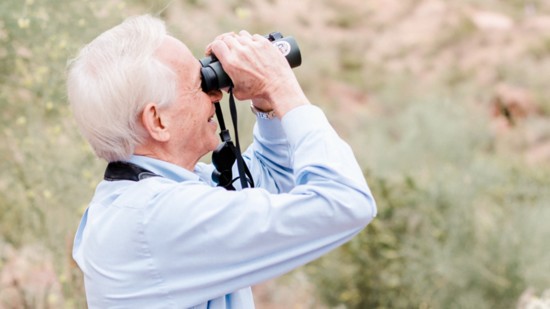 Birding Arizona: What to Know, Where to Go is written by author Charles Babbitt and shares Babbitt's 40 years of birding experiences to show when, where and how to see the many of Arizona's most fascinating, rare and beautiful birds. With its maps and descriptions, it is the ideal guide for beginning and experienced birders who want to enjoy some of the best bird watching in Arizona.

Babbitt has been interested in birds since a young child and has been very active in the Audubon Society, a nonprofit environmental organization dedicated to the conservation of birds and other wildlife.

"I did a great deal of writing about birds in magazines and environmental newspapers and was a contributor to Birds of Maricopa County Book 1997 and 2017 editions. When I retired, it was a logical extension to undertake writing a book about birds."

Babbitt consulted with and used the expertise of a plethora of birding friends. He felt asking those who were skilled with birding would add authenticity to the piece. From tour group leaders and those in university academic positions, Babbitt pulled from many who have inspired him along the way.

"The book covers a lot of ground and is exclusively about Arizona birds and birding, and what I love about it is it takes birders on a tour through the four seasons of the year and explains the different facets of bird migration and where to go to view them. The book is geared toward helping people appreciate birds and the role they play; the things they do for us is amazing. I even discuss three ways to reintroduce species such as the California condor, thick-billed parrot and the masked bobwhite, so it's not your standard field guide."

—Prominent birder Dennis Paulson, who writes such books as Shorebirds of America. "He even reviewed my book on Amazon."

—Jonathan Weiner's Beak of the Finch.