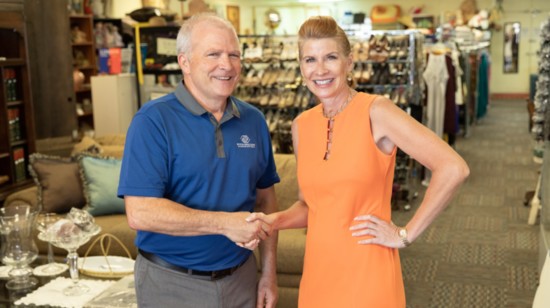 While there are many successful ways to raise money for charity, there is often little effort made to look outside the box for fresh concepts that could yield tremendous results.

The Boys & Girls Clubs of Greater Scottsdale (BGCS) recently tapped into an uncommon method of fundraising when the owners of a 15,000 square-foot Paradise Valley estate decided to downsize and donate their luxury pieces to help their favorite charity.

The BGCS talked to numerous auction companies with little success. Finally, a board member with a knack for fine goods recommended contacting Darlene Richert, the owner of Scottsdale luxury consignment store Avery Lane.

Taking a huge leap of faith, Darlene accepted all of the donated items and was able to raise $60,000 for the BGCS.

"Collaborating with local charities is something Avery Lane does on a regular basis so this was right up our alley. We have a loyal customer, Mark Bosco, who is an attorney and happens to be the Chairman of the Board for the Boys & Girls Club of Greater Scottsdale. He knew about this large donation from a major estate and that the Board was weighing various options to sell the items and raise money for the charities. They had discussed estate sales and auctions, but he convinced them that Avery Lane and consignment would be more lucrative for the charity. Avery Lane put together a proposal to accept all the items and showcase them to our affluent clientele over a 90-120 day period. We also actively marketed the charity’s pieces to our top designers and luxury realtors. We included the transportation of the items to our showroom and Avery Lane donated a portion of the moving fees to make it a seamless venture for the charity," says the owner of Avery Lane, Darlene Richert.

A few of the items that were most notable within the sale, included two large black ornately carved curio cabinets close to 10 feet tall by the designer, Marge Carson, that sold for approximately $5,000 each. There was also a large iron ornate credenza that sold for $3,000 along with several Marge Carson sofas and chairs that were each over $3,000. These immaculate condition of the pieces were a pull as well, as many were in high demand due to their unavailable status in the marketplace.

Ways that a consignment collaboration raised funds for and assisted Boys and Girls Club of Greater Scottsdale (BGCS):