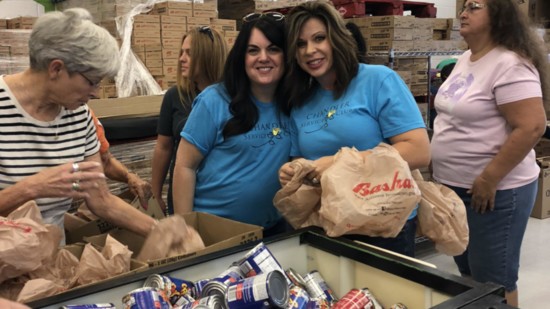 Every Thursday during the school year, a group of women gathers to stuff 660 backpacks with granola bars, trail mix, canned fruits and vegetables, soup, tuna, applesauce and easy-to-prepare mac & cheese. Sometimes, bananas and toothbrushes made it into the mix.

They deliver these bags to 27 schools in the Chandler Unified School District. Every Friday, the bags will go home with children that the volunteers—who just spent hours organizing these backpacks that help ensure the kids don’t go hungry over the weekend—will likely never meet or know.

It may have been 86 years since the Chandler Service Club was launched, but nearly a century later, those who propel this all-woman nonprofit today carry out the mission their founding predecessors did: feed hungry kids.

Founded in 1933, in the midst of the Depression, eight Chandler women merged their desires to respond to the widespread hunger among school children by cooking and delivering meals to children whose families couldn’t afford lunch.

Today, this generation of service club members partners with fellow non-profit Arizona BrainFood and businesses like Bashas’ and Food City to make what is called the Weekenders Food Program happen.

“The days we get together to pack up the backpacks, there’s so much camaraderie,” says

Claudia Vasquez, public relations chair for the service club. “That warms my heart to know these kiddos are not, not going to have anything to eat over the weekend.”

The club is comprised of 44 active members, plus lifetime and associate members. Some have great grandmothers who were among the founding women.

There is no brick-and-mortar office so there’s no overhead, which keeps the organization lean and efficient. It’s completely volunteer-run, and every dollar raised through donations or annual events like their Spring Ball goes into the Weekenders and the organization’s other programs.

There’s also the Warm Feet Warm Hearts program, which gives nearly 500 Payless gift cards to children in need of jackets or proper shoes during the cold months so they can pick out something new to keep them warm.

“The needs have grown every year, and we couldn’t do this without volunteers and donors that lead our organization,” Vasquez says.

Chandler Unified School District Superintendent Camille Casteel acknowledged that without the Weekender program, many of her students would not be in appropriate shape for academics when they return to classes on Monday. Casteel said these children typically participate in the district’s free breakfast and lunch program, so it’s conceivable that without those food-filled backpacks, they would go hungry or be forced to sustain themselves on sporadic non-nutritious snacking.

The service club approached Casteel and the district with the concept a few years ago.

“They proposed it and implemented it beautifully. There is a tremendous amount of appreciation from students, and it gives you peace of mind that children aren’t going to go without food every weekend,” Casteel says. “The Chandler Service Club is made up of the most generous, kind and compassionate women the Chandler community has to offer. They are the epitome of a community service club that focuses on doing the right thing for kids and families.”