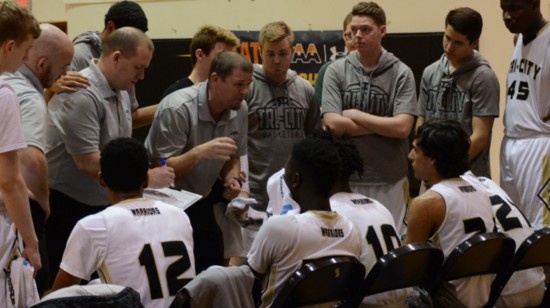 It’s late June and in a desolate stretch in San Bernadino County, Tri-City Christian Academy athletic director and varsity boys basketball coach Paul Brown is standing under a windmill on his mobile phone.

One of the state’s most winningest high school basketball coaches, Paul’s job this week is bus driver for 42 students attending a Christian camp in Ironwood.

“They told me to go by the windmill. It has the best signal. I’m in the California desert in the middle of nowhere. That’s why they wanted the camp here, because there’s no cell service,” Paul says, alternating genuine excitement about being so far from big city life with ironic chuckling.

In 16 years as head coach, Paul’s 284-66 record has made him one of Arizona’s most successful coaches of an elite program that has evaded the mainstream radar. Last season, he led his Warriors to a 25-2 record and a second place finish in the Canyon Athletic Association.

His roster includes students from Africa and Costa Rica. Several of his players have attracted attention from NCAA Division I schools, including Nigel Shadd, currently a sophomore at Kansas State University.

But another one of Paul’s big assets is his commercial drivers license, which is how he ends up under a windmill.

“The good thing about having a CDL is that I don’t have to wait for a bus driver. If there’s a tournament, I can put everyone in the bus and go. It’s nice as a coach,” he says. “It also means that sometimes you do other things…”

And this sums up much of who Paul is at heart. He’s practical, easygoing with a great sense of humor, and an ability to roll with the tide. He’s also humble. When asked what is record was, he had to ask his assistant because he didn’t exactly know.

“They like to remind me of what it is. I just praise the Lord and take them one at a time,” he says.

When Paul arrived at Tri-City 20 years ago, he coached the girls varsity basketball team for three years to a 51-2 record and two state titles before moving to the boys squad. His victories come at a K-12 private Christian school that has open enrollment but is tuition-based, which can be a challenge when retaining students. The enrollment fluctuates from 185 to 425. There’s also competition from the cachet that comes with the Arizona Interscholastic Association’s big schools.

These are reasons why Paul’s program should not excel as much as it has. It’s a mystery he’s not taking for granted.

“Somehow, people still want to come and play at Tri-City. I’m definitely blessed to have some amazing student-athletes,” he says.

A native Arizonan, Paul graduated from Mesa Mountain View High School. At 5-10, he was deemed too small to play basketball, which he loved but was always the last guy cut at tryouts. He was taking a weight class when the wrestling coach spotted him and asked him to join the wrestling team. What sealed the deal? In the off-season, wrestlers played the basketball team because the coach thought wrestlers banging on the players in practice would make them stronger.

Paul attended the former Pillsbury Bible College in Minnesota, where he played Division III basketball and golf. He earned his physical education degree with a minor in coaching.

Paul and his wife have been married for 15 years and have four children, ranging from grades one to seven. They all attend Tri-City.

Although he didn’t think he’d be at Tri-City for 20 years, Paul’s not complaining.

“It’s amazing when you find your niche and you find the things you love. And this is exactly what I’m supposed to do,” he says.

Heading into his 17th season, Paul’s roster is packed with international and homegrown talent hoping to take the CAA championship. He knows they’ve got what it takes. He has to make sure his kids know it, too.

“That’s part of coaching. You need to remind them that they have the ability… now, let the game be the showcase of all the work you’ve put into it,” he says.

But Paul is quick to turn his attention on a larger picture that extends beyond the court.

“I try to use the game of basketball to help kids learn about who Christ is and what he does for you,” he says. “If I can help a kid be a better person in our community, then I believe this school can change his life.”