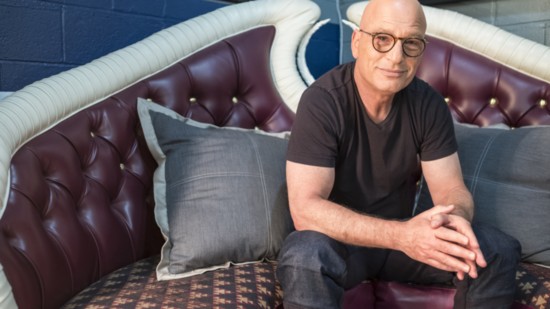 On Being in the Valley, Taking Cholesterol to Heart and What he’s up to Now

Howie Mandel has visited the Valley many times throughout the years. The popular comedian, actor and television host was the headliner at the Arizona State Fair for many years and performed at Celebrity Theatre, amongst others, but he and his wife enjoy visiting spas in town, as well.

Recently, he was in the Valley for another reason—to talk about something else that is near and dear to his heart. Literally.

Howie is part of the Take Cholesterol to Heart campaign (TakeCholesteroltoHeart.com), and he’s on a mission to educate others about cholesterol.

His personal journey with high cholesterol began 30 years ago.

“The truth is, I just went to the doctor for a general check-up like I do yearly, and part of the general check-up was taking blood. When the test results came back, he said, ‘You have really high cholesterol’ and he wanted to put me on a statin.”

Howie initially agreed but then didn’t follow the doctor’s orders.

“I took my statin. I didn’t like my statin. So, I stopped taking my statin,” he says.

He didn’t like how the statin made him feel, so he simply stopped taking it.

“I recently learned that many people—at least 50%—stop taking their statins [within] a year of starting them,” he says. “That’s why I’m so glad to be involved in Take Cholesterol to Heart, a campaign that encourages people with high cholesterol to talk more openly with their doctor and find the statin that works best for them.”

When Howie’s check-up the following year showed that his cholesterol was “through the roof,” he confessed that he’d stopped taking his statin—and had done so without consulting his doctor.

It was then when he learned there were different statins to try and that not all would affect him the same way.

Today, Howie continues with the active and healthy lifestyle he’s always followed and has been faithfully taking a statin.

“I want to tell people how important heart health and cholesterol is. … [and] how prevalent this issue is. It’s [a leading] cause of heart disease and stroke, which is the No. 1 killer in our society.”

Howie stresses that even if you don’t feel like anything is wrong, it still could be.

When he’s not talking cholesterol, Howie’s calendar is filled family time, and of course, with numerous shows.

“My panacea in life is being busy and being distracted, and I’m one of the luckiest guys in the world—having that seat at the table at America’s Got Talent and watching people’s hopes and dreams come true, having that stage at Deal or No Deal and watching people hopefully leave better off than when they came in, having fun and working with my son at Nat Geo Wild on Animals Doing Things and laughing all day long at funny animal clips and trying to add to that or standing on stage and recording my first comedy special in 20 years.”

“I’m on a statin, and I feel perfect,” he pauses and laughs. “I think I am perfect, but that’s up to you and the readers to decide!”