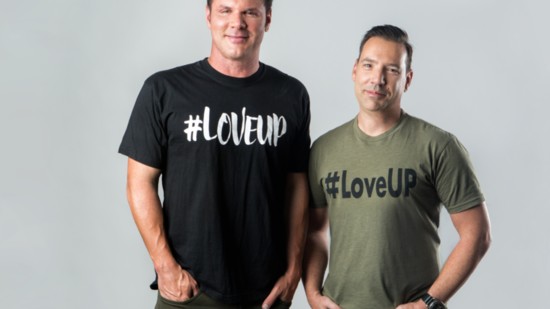 Five years ago, Johnjay Van Es, from 104.7 Kiss FM’s nationally syndicated morning show Johnjay And Rich, received a text from a friend that changed his life. Kurt Warner, Hall of Fame NFL Super Bowl quarterback, was his son’s football coach, but Warner had to be away for a game. Van Es texted updates. Their boys made a winning play and Warner texted back: Love up! He meant love it.

Van Es thought about all the good that could come from the phrase “love up.” By Monday, his words on-air sparked something extraordinary. He inspired a community which lead to the creation of two booming foundations.

Van Es had two first loves. One was a tape recorder. At 7-years-old he practiced his interviewing skills with his sister and followed his parents around their Chandler home with a mic. It did the trick because today he interviews people like Oprah Winfrey and Logic.

His second love was his dog. Now he has nine. Thankfully, his wife, Blake, shares his enthusiasm for fur babies. They also have three sons, Jake, 15, Kemp, 14, and Dutch, 12.

“My wife is a very unique individual. She just loves and has empathy and compassion, and teaches that to our kids.”

Together as parents, their goals align.

“Values are caught not taught. You have to show them how. You can’t tell them to be nice, they have to see it. They catch things,” explains Van Es.

In addition to the radio show, dad and husband duties, Van Es is the founder and president of two foundations.

“Last night at 9:08 I get a text from my wife saying: I love doing life with you. It says so much. That’s how much fun it is for her and me after 22 years of marriage.”

Monday morning, after Van Es received the text typo, he told his story on air and asked people to #LoveUp. The next day, a guy came into the studio wearing a shirt with the phrase printed across it. Van Es talked about the shirt and where to get one. A month later, the man came back and handed him a check for $20,000. His cut of the sales.

They made more shirts and raised half a million dollars that year. Then the fun began. It was time to give it away.

Van Es founded #LoveUp Foundation to be a force for positive change in the community. The foundation recently donated 200 new laptop computers to kids in foster care. They have a huge Christmas party for them and give gifts. They have a back-to-school program and take kids shoe shopping. They also do #LoveUp moments on-air.

Blake sent the next game-changing text, a photo of a Chihuahua found at their kids’ school. Van Es put it on Instagram with #LoveUp and found him a home, but photos of dogs in need quickly took over the account. Months later, Van Es founded #LovePup Foundation, a dog rescue.

“I don’t run it the same way as many other rescues. I don’t charge, and I interview every family,” he says.

The rescue operates out of his home with the help of his family and volunteers, but it is close to getting its own building. Last year the rescue placed 500 dogs; this year around 1,400. The dogs receive medical care, love, and eventually find their way into Dutch’s room.

“This morning he had nine dogs in his bed,” says Van Es. “We bring the dogs in and they leave our house ready to be loved on.”

“These are my family’s passions. It’s not work,” says Van Es. “Find something you’re passionate about and chase it, make it happen. That’s it. Feel bad about all the negativity? Do something about it. Love up.”