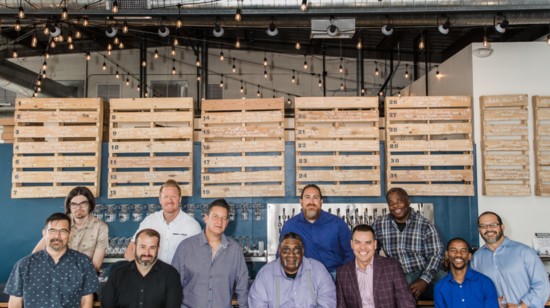 With Drive and Dedication, these Men Help Shape Chandler

“Check, check and check!” he says.

He’s the Chandler Heights Substation Commander with undercover experience, a veteran of the United States Air Force, a pilot and a martial artist. He volunteers for several youth-focused organizations, and he learned to dive.

“Chandler has provided me with so much, and anyone who volunteers their time knows you get more out of it than you put in.”

Edward has volunteered with ICAN for more than 28 years. He’s the president of the Chandler Coalition on Youth Substance Abuse and volunteers for Chandler I AM Project to address the growing opioid epidemic.

He’s been a police officer for 32 years, and when Upshaw retires, he hopes to travel the world with his wife and scuba dive whenever possible. His wife and two daughters dive as well.

Words he lives by? “It’s a round world. What goes around comes around.”

And he grew up to be one.

During his time at Penn State University, Jody held a museum internship—and what seemed like a child’s dream then became his grown-up career. Because of that, Chandler now has the Chandler Museum.

“I fell in love with a museum’s ability to take tangible objects and open up a new world to a visitor,” says Jody, whose determination and skill was instrumental in bringing the Chandler Museum’s concept to life. “The most rewarding thing is seeing visitors become inspired or touched by the exhibits and programs.”

In addition to being instrumental in creating the museum, Jody has also been involved with bringing Chandlerpedia to life, turned the Museum’s Tumbleweed Ranch into a learning environment for school groups, established the popular Chuck Wagon Cook-off, and more.

Jody credits a college professor whose creative ways of weaving an educational tale inspired him.

“He showed me the joy of awakening minds to a topic that his listeners probably knew very little about. He showed me what it was to be a great storyteller.”

After years of investing and building companies, Aram Chomina-Chavez followed his mother’s footsteps into teaching.

A teacher and mentor to the students at Fulton School of Engineering, Aram is set on mentoring the next generation of leaders, and his teaching style frees them from the traditional constructs of uniformity with lateral thinking through entrepreneurial road mapping.

It’s something he finds incredibly rewarding.

“Mentoring several students and startups each semester and teaching our future leaders is a priceless occupation. Getting to listen to people’s dreams every day is incredibly humbling.”

Outside of his 70- to 80-hour workweek, Aram donates his time to efforts like Tonto Creek Camp, which delivers curriculum to underserved youth every summer.

The married father of two also volunteers his time to coach soccer to young kids, mentor students, and help entrepreneurs and small businesses in Chandler. He is also currently publishing a book on entrepreneurship.

MJ Reavley has always had a love for both fitness and people and, as the owner of Fit Society, he is able to combine both of those passions daily. He believes in steward leadership—essentially leading by serving and doing—to help him create a fitness community that “connects, challenges and inspires people to be better together.”

With a “work, play, achieve” approach to life, MJ says that the most satisfying part of what he does is helping his clients to create real relationships.

“The most rewarding feeling is being able to act as a vessel for real, positive life-changing relationships for the better."

In addition to his work at the studio, he also gives back to local charities, schools and small businesses in a variety of ways. While several coaches have inspired him throughout his fitness journey, he shares that his mother is his biggest supporter and inspiration. From a small town in Colorado, he appreciates the hometown feel of Chandler, and while he’s known for his fitness and healthy lifestyle, he admits that he has an affinity for chocolate chip cookies and “people who do the uncommon, uncommonly well."

Jimmy Silva is a problem solver, a good listener and a people person. He’s also a United States Marine Corps veteran who supports a long list of nonprofit organizations.

“Entrepreneurship is in my blood. I believe in owning your life, taking some risk, helping others in need and helping others achieve their dreams of owning a business.”

He gives his dad credit for his work ethic and his ability to overcome challenges. He also tips his hat to his wife and kids.

“My wife is my rock and inspiration,” he says. “We’ve been through so many life battles together and continue to come out on top. My four kids show me every day why I’m here and that no matter how hard business gets, connections to people you love are the most important thing and offer the greatest wealth.”

Jimmy and his wife are adoptive parents. Their four kids are siblings who they fostered for two years before making their family official about a year ago.

“When we took on the challenge, we thought we could be some kids’ heroes, but we found that we were the lucky ones being taught lessons of humility, adversity, healing, and resiliency of humanity. We are humbled by this experience.”

Robert Whetstine is a positive guy who’s not afraid to dress up as the Grinch for ICAN’s youth holiday party. He’ll even bring his son, dressed as Buddy the Elf. Family is important to Robert, and he has a big one. He’s married and has two teen sons, three rescue dogs, two cats, two tortoises, a snake and a hamster.

“My family inspires me, because any success I have had is direct result of the amount of love and support they have always provided me.”

Robert is a member of The Henrys, ICAN’s leadership development group that fundraises. And thanks to his efforts, Toyota Financial Services is a sponsor of its annual Thanksgiving dinner, which feeds 500 community members a free holiday meal.

Robert also volunteers for Together We Rise, The Boys & Girls Clubs of Guadalupe and UMOM. He coaches youth sports and enjoys giving back to the community by supporting local businesses.

His next goal is to share his love of books by reading to kids in character. The most rewarding part of what he does is knowing he made a child smile and feel important.

For those who encounter him at Desert Car Care of Chandler, they might be surprised to find out that Frank Leutz is also a highly trained jazz trombonist, a DJ and a short film producer. The dad of two calls the family business home because he was inspired by his father-in-law years ago while serving as his apprentice. He realizes that car care isn’t just about the vehicles, but he appreciates the opportunity to make an impact, too, by helping to reassure customers when they’re going through a stressful time.

“My primary goal is to be the best I can be for my family and community while inspiring others to do the same.”

His shares that his inspiration in life was his mother. “As [she was] a single mom working to keep things safe and comfortable, I learned the value of work ethic and accountability while always enjoying the smallest things in life.”

Frank also dedicates time to working with an extensive list of charitable causes, including Mothers Against Drunk Drivers, 22toMany Veterans, Youth World Education Program Mentor and many others.

Herbert Washington lives a life filled with music. Since he was a child, the notes have frequently carried him to the Phoenix Boys Choir, which he joined when he was 10 years old. The choir provided him opportunities to perform, travel abroad and meet incredible people. His adoptive mother, Judy Van Boening, was their nurse for many years. She’s also Herbert’s greatest inspiration.

“She taught me that no matter the negative circumstance, great people are in this world to support, and perseverance reigns supreme," he says.

Today, Herbert is a singer, choral conductor and composer, and the music has carried him back to the Phoenix Boys Choir as its new artistic director.

“In a world plagued by an epidemic of bullying, depression, loneliness and anxiety, choir provides a positive, safe, fun, expressive, communal environment to combat societal issues that destroy our youth.”

When Herbert’s not in the classroom, he can be found with his wife and two boys. He enjoys playing basketball, Latin dancing and volunteering at a variety of places such as food banks and retirement homes, where he performs for the residents.

“I want my companies to bless our local community by providing a great place to connect and practical training to the business community for both business and personal growth,” explains Chuck Fazio.

Chuck (along with his wife, Angela) owns four Chandler-based businesses.

“My wife and I run businesses in order to serve people and bring the community together,” he says.

These businesses exist to establish environments where people are free to grow and thrive financially, professionally, personally and spiritually together.

When asked what words Chuck tries to live by, he quoted Proverbs 27:17, “As iron sharpens iron, one man sharpens another.”

“It really matters who you surround yourself with. Walk by faith, not sight.”

Pastor, Congregational Church of the Valley

Director, For Our City Chandler

Several decades may have passed since Rev. Victor Hardy was a kid. However, the Chandler pastor has something in common with many children today—and this difficult experience he shares with them ultimately shaped his future.

“As a child, I was bullied and called ugly. This made a huge impression on my life,” says Victor, who did a lot of self-searching and came up with a response.

“I chose kindness … to be a friend to everyone I meet. … No matter the situation, I want to respect each and every person along my travels, even if they do not respect me.”

His involvement with Chandler Men of Action, a non-profit with a mission to mentor African-American youth, was sparked by his sons and wife, all of whom took on city positions or key community roles.

Victor is extremely involved in the community, working on such organizations as The Chandler Symphony Orchestra, The Chandler Operation Back to School, Chandler Multicultural Festival and so many others.

When asked what the most rewarding part of what he does is, he says, “Seeing the impact the (Chandler) Men (of Action) have on others, realizing the potential they can have on others.”

This father-son duo is having a doggone good time together—they both volunteer with One Dog Arizona, which was founded by Jon’s wife and Jack’s mother, Jennifer Bell.

“My wife started bringing home foster puppies, and I kind of got roped into helping, at first,” Jon, who also works full-time at APS, says. “Then I grew to love dogs that needed extra love and care.”

Jack was initially inspired to help with rescue animals because the owner of the farm where he rode horseback as a child ran a dog rescue, and he wanted to help the animals find a home.

Today, he is a full-time employee at Fry’s, a part-time student, and helps his mom care for the animals, as well as assisting her with data entry for the rescue during tax season.

“The most rewarding part of what I do would be the happiness that I help bring to the rescue dogs and the families that inevitably adopt them. While letting go of an animal you’ve spent so much time caring for is certainly hard, it feels amazing to find them a 'furever' home!”

In addition to volunteering with the dog rescue, the pair enjoys spending time together with other pursuits, as well.

“I’m a fan of Rick and Morty, thanks to spending one-on-one time with my son, who is a major fan of it,” says Jon.

Photographed on-site at The Sleepy Whale