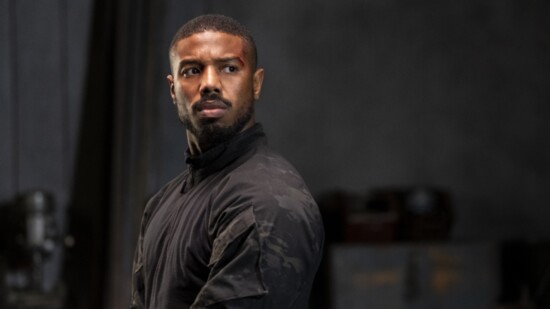 Ten years ago, Michael B. Jordan was running around Talking Stick Resort Arena (then US Airways Center) in a Phoenix Suns uniform. The actor, fresh off a stint on the NBC hit Friday Night Lights, joined celebrities like Common and Frankie Muniz for the 2011 Phoenix Suns Celebrity Shootout. A few years later, Jordan suited up in Suns’ orange again—at least in video game form—playing a member of the team on an extended trailer in the popular MyCareer mode for game NBA 2k17.

Maybe the two brought each other good luck. For the first time in 11 years, Arizona’s NBA team is heading to the playoffs. And fresh off his People magazine’s Sexiest Man Alive honor, Michael B. Jordan has at least two big projects in the works, and is about to make his directorial debut.

While being “sexy” may be something the actor scoffs at, being BUSY is something he relishes. Since his time in Arizona, the actor has developed quite the resume, playing everyone from Black Panther villain Erik Killmonger to famed human rights defense attorney Bryan Stevenson, to Rocky’s protege and Apollo Creed’s son, Adonis.

Last month, the Newark, New Jersey native entered the world of Tom Clancy, starring as a Navy SEAL-turned CIA operative in Without Remorse (currently available on Amazon Prime video), a film his own production company backed.

Michael B. Jordan’s Outlier Society Productions made headlines a few years ago, when it became one of the first to adopt an inclusion rider, demanding diversity in hiring crew members and cast.

Today, Jordan is wrapping up a project directed by Denzel Washington, and then he will head behind the camera for the first time for Creed 3. We caught up with him while he was promoting Without Remorse. Turns out, despite his full schedule, Jordan is just a kid at heart, still making time for his other passions: cooking, spades, and video games.

Interview with Michael B. Jordan

I know your introduction to the world of Jack Ryan was through video games. When do you have time to play video games?

You’d be surprised! [He laughs,] It’s one of my pastimes. Honestly, it keeps me out of trouble. It’s one of the things I actually do a lot, even in between filming or other things. I’m usually online playing. It’s definitely a pastime.

That’s a great question. I would say it’s between cooking and shooting pool. I’m a low-key pool shark. Or playing Spades—it’s a card game. That’s another one!

In Without Remorse, this guy has nothing to lose. When was the last time you went after a project with the attitude, ‘Hey, I’ve got nothing to lose?’

Oh, that’s another great question. I mean, I think I approach all of them with that attitude, you know? It’s a little bit of that, but it also comes with a tremendous amount of respect. I think it’s a weird combination of throwing yourself into the deep end. Sometimes it’s the fear of failure that drives and propels you even more forward into something. And, also having the ‘whatever happens, happens,’ attitude, you know what I mean? It’s a combination of… actors are crazy! [He laughs.]

Speaking of throwing yourself into the deep end, you’re directing Creed 3. I know Sylvester Stallone just announced he’s not going to be part of the cast. What would you like fans to know who might hear that news and go, ‘How’s that going to work?’ I mean, you’re in charge now.

I feel like, you know, with Creed... we’re telling Creed’s story and building out his world as much as we can, and going down that direction. I feel like every familiar face in the beginning of a franchise isn’t going to be around the entire way. I think the ones that show up for Adonis and what he represents and stands for... you’re always going to get a piece of the Rocky-isms through Creed because that’s the world that he stems from. But moving further into this franchise?? It’s Adonis’ film. [He smiles.]

I have to ask you about my favorite Super Bowl ad… featuring you! The Alexa ad. I asked your co-star what household task she’d have you perform that wouldn’t threaten her husband.

She said she’d have you draw her baths.

What’s the craziest thing your buddies have asked you to do for a friend or a spouse as a favor?

Everybody is pretty chill. I think it’s been mostly videos or FaceTiming for a friend or a niece... or somebody’s somebody.. or a video. But I’m always down to do that... send some love.