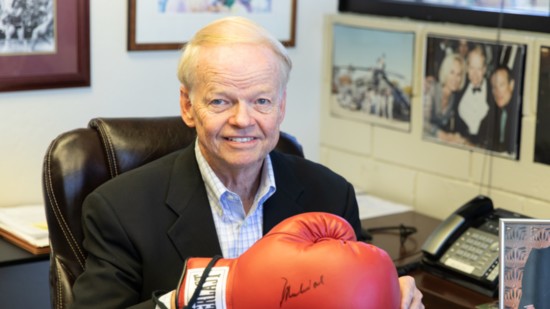 Almost every single Monday for the past 11 years, Jimmy Walker—the iconic local businessman, philanthropist, and CEO and founder of Celebrity Fight Night (CFN)—has kept the same appointment, which Jimmy says, “is one of my favorite meetings of the day, maybe of the week.”

Jimmy heads to The Society of St. Vincent de Paul (SVDP), a nonprofit located in Phoenix that is dedicated to feeding, clothing, housing and healing individuals and families within the community, many of them homeless.

In 2008, Jimmy contacted SVDP’s executive director, Steve Zabilski, sharing his idea of launching this weekly program for about 600 homeless men and women through Celebrity Fight Night. Jimmy offered to speak every week, along with bringing a guest speaker with him with the understanding that they would together share inspirational words and messages to the homeless.

Jimmy is passionate about giving back and helping others.

“I’ve invited over 400 speakers who have spoken from our community who have made themselves available for the past 11 years," Jimmy says." We’ve had speakers from Muhammad Ali to housewives to firefighters to police officers to Larry Fitzgerald to brain surgeons to Gov. Doug Ducey."

“I like to encourage the homeless to never give up. We have all made mistakes, we have all at times failed, we all have had moments of being discouraged or depressed when struggling with our problems. … I tell them we are all human.”

Some of Jimmy’s friends, such as Kevin Costner, say, “Jimmy is really a giver.” Billy Crystal mentions, “What you want to do with Jimmy is give him something, so he can do more. You always know that whatever you do for him, it’s for something good.” David Foster says, “Jimmy’s dedication to Celebrity Fight Night will never be equaled by anyone else in my lifetime for any other cause—period—for every life he has touched.”

In addition to the Never Give Up program, Jimmy is involved with St. Vincent de Paul in other ways. Though CFN, there was a donation of a mobile water and a supplies truck that delivers items to the homeless on the street in the Downtown Phoenix area, known as the CFN water truck. There was also a donation from CFN where they gave a full-size basketball court with six baskets. Furthermore, Jimmy arranged singer Andrea Bocelli to sing Ave Maria to the homeless several years ago on the basketball court.

CFN has completed 25 annual events in Phoenix, and now it has taken its charity event internationally, joining Andrea Bocelli’s foundation in Italy for the past five years. Recently, CFN hosted an event in the ancient Colosseum in Rome when Andrea, Elton John and Steven Tyler sang. During the evening, Sophia Loren was honored.

CFN also gives to other charities, including its lead charity, The Muhammad Ali Parkinson’s Center at Barrow Neurological Institute in Phoenix. In addition, 36 years ago, the Walker family created a Bicycles for Kids event, each year in early December, for many young children in the intercity. During the holiday time, bicycles and food from the St. Mary Food Bank are given with their friends—thus far more than 9,000 surprise bicycles at this annual Christmas party have been given to many underprivileged children.

“There are many people who give back considerably more than myself," Jimmy says.