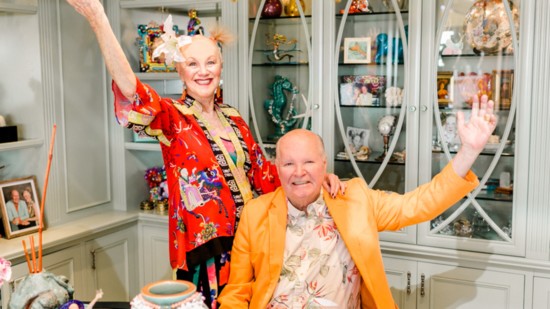 Philanthropists Billie Jo and Judd Herberger on Giving Back, and Their Lives Together

Around the Valley, there is one couple whose name is synonymous with the arts: Billie Jo and Judd Herberger.

“We just enjoy it and we enjoy being active within the arts community,” Judd explains.

“And it’s also what we both grew up with,” Billie Jo shares. “Both of our parents were involved in the arts in their communities. Judd’s parents here [in the Valley] and mine in Southern California. So, it’s something that we grew up with and knew.”

The philanthropic couple are both supporters, as well as patrons, of the arts. In fact, it’s almost impossible to live in the Valley without knowing their name. Not only does it adorn places such as the Herberger Theater, but the warm-hearted, fun and giving couple is also often seen around town at various events.

It was Judd’s mother, Kathryn “Kax” Herberger, who introduced the couple.

“She was a very good friend of Billie Joe’s,” Judd explains. “One thing led to another and pretty soon we were meeting at Mother’s home after work to share a glass of wine…”

“And it never ended,” Billie Jo breaks in.

“It never ended,” he agrees, smiling at her.

While Judd grew up in the Valley, moving here when he was just 4, Billie Jo grew up in Southern California. She loved to surf—even teaching the couple’s five children and five grandchildren to surf (they also have five great-grandchildren). In fact, it was her passion for the sport earned her the enduring nickname “Surfer Girl.”

“We have our beautiful yacht in Marina del Ray and we love to slip away and go to the boat with or without extra guests,” says Billie Jo. “Over the last 15 years, we’ve created a separate little life over there.”

But, as they explain, when they’re here in town, their time is spent being involved with the arts.

One of their main priorities is Herberger Theater in downtown Phoenix and all of the resident theater groups that are part of it.

“Over 30 years ago, Judd’s parents were the founders of the Herberger Theater. They built it. His brother was an architect and scouted all over the country to create the best theater in the time period and size period it was being built. [The facility] is so interesting because it’s also an art gallery. It’s multi-faceted,” says Billie Jo.

“We also like organizations where young children are being inspired by the arts, whether it’s Childsplay, Valley Youth Theatre or Kids In Focus,” she says. “We like seeing how it gives young people a purpose and discipline and pride, and it helps them for the rest of their life.”

“Our only other real commitment outside of the arts is the American Heart Association,” she continues. “The Heart Ball. I’ve been on that committee for years. And TGen. I’m still part of that, as well.”

The past few months have big ones, as well. In October 2019, the Herbergers were inducted into the Herberger Performing and Broadcast Arts Hall of Fame, and on the 50th anniversary of her graduation from Northern Arizona University (NAU), Billie Jo was recognized on the cover of the school’s alumni magazine. In late 2019, the couple gave a gift to the NAU Foundation, which will name the corridor outside the Instrumental Rehearsal Room the Billie Jo and Judd Herberger Instrumental Music Hallway.

When they’re not attending events, Judd can often be found at his office—he still goes in every day. In the evenings, the couple enjoys hosting parties in their home.

“We love to entertain” Billie Jo shares. “We have a lot of big fabulous parties up here in our house. We always have music—we always have a piano player, and at our Christmas party we had a harpist.”

They enjoy quiet time as well, sharing that even in the hot summer months they enjoy breakfast every day on their patio.

“We enjoy being active in the arts community, and we just enjoy our life,” says Judd.