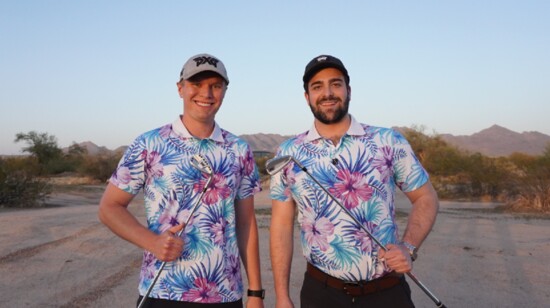 Two Friends Golf: Fabulous Apparel Line Is A Hole In One

The tale of two very big personalities who recently broke into the golf apparel industry began in 2014 when Nate Baker and Matthew Erickson met on the first day of their freshman year at Arizona State University. While their majors were different—one studied business and the other law—they’ve always been on the same page. Fast-forward to 2020, and the dynamic duo found themselves as bored roommates, on lockdown, in the middle of the coronavirus pandemic.

“There was nothing to do besides look at the news, run outside, and play golf,” says Baker. “Our love for the game started as soon as we hit the driving range, since that was the only thing open. Little did we know, golf would become a passion of ours very quickly.”

They started hitting balls at the range every single day, and played the best golf courses Arizona has to offer. After consistent rounds for about a month, they came to an agreement.

“Golf was awesome but needed some work,” says Baker. “Not in the way it was played, but how people were dressed. When we first started golfing, the apparel that we saw was very basic. There are a few companies out there that make interesting polos, but we knew we could do it better.”

The idea to launch Two Friends Golf came shortly after Baker and Erickson had a couple of beers at McDowell Mountain Golf Course. Happy hour turned into an intense brainstorming session where the soon-to-be founders would incorporate their personalities into unique designs to achieve looks that people had never seen before.

“There are so many new golfers starting the game just like us, and we feel that we can match the vibe for everyone playing,” says Baker. “It doesn't matter if you play good or bad, you can at least dress the best and have a great time doing it.”

And so, Two Friends Golf offers a wide variety of prints. Tropical styles are inspired by Baker and Erickson’s love of the beach, not sand trap. Retro designs are inspired by their love of being bold, bonding on the course, and making a statement.

“To us, staying on brand is what we are both interested in, and we plan to only come out with styles that we will rock on and off the course,” says Baker. “Our polo shirts aren’t just for golf. We’ve had people wear them to gender reveals, bachelor parties, and even couples' photoshoots!”

Baker and Erickson also played well in the marketing world by landing a deal with TikTok’s Too Turnt Tony, an influencer with more than 10 million followers whose videos are over-the-top, to say the least. Baker sent a direct message, Tony’s manager responded, Two Friends Golf polos were sent, and the rest is history.

“We figured the quality would speak for itself,” says Baker. “After a few meetings and a contract, we got the deal done to make all of his new golf polos. Some might say he is a little bit on the wild side, but we say he is a marketing genius.”

But Baker and Erickson are obviously the geniuses as their first three launches sold out in no time with zero advertising dollars spent. The trendy polos are accompanied by equally trendy names such as Maui Wowie, Retro Bro, Hawaii 2.0, Shocker, Incognito, and Bold AF. The apparel is also reasonably priced at $69.99.

“Throughout this journey, we’ve both improved our golf game to finally break 90 and looked good doing it,” says Baker. “We hope to inspire people who are nervous about getting into golf because they feel they aren’t good enough. With enough practice and the right polo, anything is possible.” TwoFriendsGolf.com 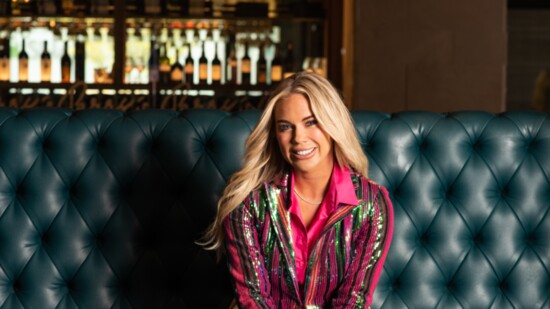