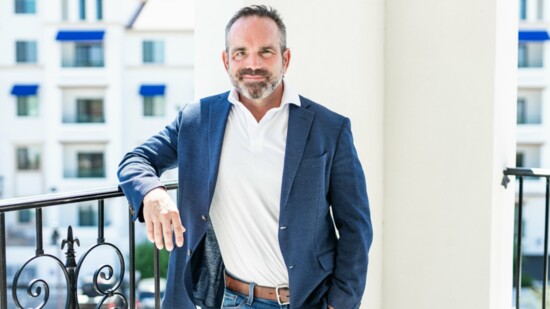 Twenty years ago, the live-work-play residential concept was alive and well in many parts of the country. Arizona wasn’t one of them.

So, when Valley native Spike Lawrence looks out onto Downtown Ocotillo’s collection of restaurants, shops, and business offices from his condominium today, the mega developer responsible for the multi-use haven sees that times have changed.

And in a metro area not known for this kind of lifestyle, it’s a rarity he appreciates.

“I love the live-work-play environment. It’s something I always wanted to do… have the feel of urban living in the suburbs,” Lawrence says.

Born and raised in Tempe, Lawrence saw an inkling of it in the Mill Avenue area during and after his years at Arizona State University. He moved to Chandler, and envisioned that after acquiring land and developing shopping centers and homes since the late-1990s that would become Ocotillo.

The number of successful global companies like Intel and Wells Fargo provided the quality employment base that pairs well with Ocotillo’s desirable housing. Lawrence realized his idea’s time had come and developed master planned communities throughout Ocotillo. He completed Downtown in 2008.

“To create that environment in a high-density suburban area where you could walk to restaurants and go to the dentist or hair salon, it was unique for its time,” Lawrence says.

Downtown features service-based business, like a dental office, salon, medspa, wine storage that hosts tastings for its members, and Montessori school, all within its tree-lined boulevards and water features amid a Santa Barbara-esque charm. There are also a half-dozen restaurants, with more to come.

Lawrence’s personal preferences come into play when selecting Downtown restaurants. He likes a good wine list and exceptional food. But being locally owned is a must.

“There’s no fast food. No chains. That’s what I believe the neighborhood wants,” Lawrence says.

That’s not a hunch. Lawrence seeks out and incorporates community feedback on every development since his first acquisition in 1998. He is doing the same with New Square Chandler, his latest multi-use development collaboration with HCW in Downtown Chandler.

Lawrence praises the community’s support of local businesses during the pandemic, and a pro-business city government that also played a role in saving them.

In the meantime, he savors the feedback from those who live in Ocotillo and those who don’t and are amazed by the concept he’s brought to life.

“To have that kind of urban living in suburbia, people think it’s great,” Lawrence says.

Lawrence hints about a new concept that will join Downtown’s restaurant family in November that will serve breakfast, lunch, and dinner, feature a private dining room, and “a retail wine shop with better pricing than Costco.”

We’ll have to wait for that one. But these food and beverage spots are ready to serve now in Downtown Ocotillo (DTOcotillo.com).

Head here day to late night for flatbreads, sushi rolls, and shareables from Spinach Artichoke Dip to Thai Chicken Lettuce Cups. Do happy hour on the patio with a glass of wine or a signature cocktail. Bring friends for live music on the weekends.

Mull over dozens of menu items spanning specialty rolls, sashimi, teppanyaki, and bento boxes. Pair your food selection with a sip from the Asian beers lineup or expansive sake collection.

Whether your pick-me-up is a classic simple drip or an adventurous latte, your buzz comes from beans sourced by importers that specialize in cultivating relationships with growers in select countries like Ethiopia, Peru, Costa Rica, Brazil, Sumatra, and Guatemala.

Utilizing the Marine Stewardship Council and in collaboration with the Monterey Bay Aquarium Seafood Watch, taste this hot spot’s commitment to responsibly sourced seafood for yourself with a fish menu comprising halibut, swordfish, king salmon, and more.

Satisfying and healthy eats await with brunch to dinner bites ranging from benedicts, grain bowls, and tacos that span vegan to grass-fed steak. Build your own plate with mains including chicken, steak, salmon, and tofu, and sides of quinoa, charred cauliflower, baked mac & cheese, and more. Order a pint of local brews from Huss Brewing Co. and Grand Canyon Brewing Company.