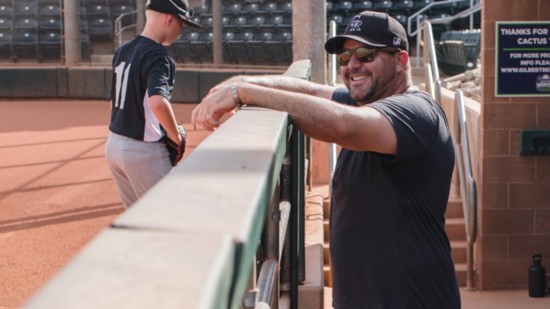 How One Local Dad Saved the Season

When Chandler National Little League (CNLL) had to cancel the season due to concerns about COVID-19, hundreds of local children were disappointed.

“The kids had been drafted, had practices, then went on spring break,” recalls local dad and coach John May. “Once spring break was over, things had been shut down.”

May’s son Brodie is 12, and plays in the Majors category of Little League. While the family sheltered in place during quarantine, May began to realize that his son’s—and all of the players’—entire season would be lost. For many of the children in the 11-12 age category, this would be their last season in Little League, so when Governor Ducey allowed the state to slowly open back up, May got to work on trying to recoup the lost season.

“I have the skillset of organizing and raising funds, so once it was obvious that there was a desire for this to happen, I felt like we hard to work as hard as possible to make it real,” he says.

May and other parents, coaches, and volunteers polled families of the 11- to 12-year-old players, and it was obvious that the kids wanted to hit the field.

“Brodie and his friends wanted to have fun with their buddies, and this is the last time that I would have this experience with him as a coach,” May shares. “This is many of these kids’ last chance to play organized baseball.”

To help parents with the costs, May raised over $11,000 from local donors and community organizations. The league grew to consist of 122 kids split into 10 teams. The revamped season started on June 1 and included 25 fast-paced days of practice and games.

“The new league has 10 teams comprised of 11- and 12-year-olds and they remained on their CNLL team that drafted them to start the season,” explains local resident Greg Sanchez, who was also involved in the effort. “The same coaches that drafted the players and had already practiced together for over a month all remained intact. It wasn’t an easy feat to get this accomplished and it is people like John May, who go above and beyond, that make our Chandler community so special… As a former board of directors member of CNLL, a former coach in CNLL, and a dad of four sons who have all played for over a decade in CNLL, I have a huge appreciation for what John accomplished for these families during this time.”

To make the shortened season happen, there were many hurdles—such as scheduling fields, coordinating busy schedules, and more. The teams played the games at Cactus Yards and Snedigar Sports Complex. May says that, while he was at the helm, it was a community effort.

“I’d really like to thank Eric Bell with USSSA baseball, he has supported us all of the way and has helped provide the liability we need to allow these kids to play,” May shares.

With the novel coronavirus still a concern, May says that he provided Governor’s Ducey’s guidelines to players, coaches, and their families, and they took all of the precautions they could. They also did their best to help players stay safe in the heat.

“Despite everything going on in this world, on opening day in June, it was obvious that the kids were happy to be out playing baseball, and the parents were happy to be out watching them,” May says. “I hope that kids take away from this time period how to be resilient, how to not give up, and the importance of social interaction—of having each other.”