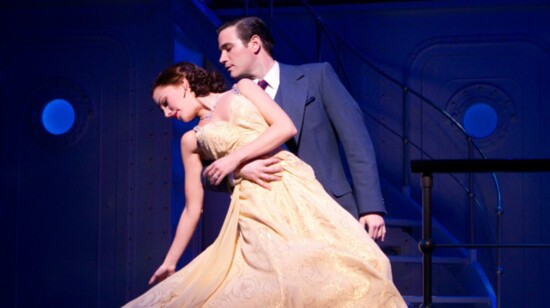 From Kirkwood to Curtain Calls

On an ordinary day at Kirkwood High School, a freshman walked into an audition room for the winter musical.

As a freshman at Kirkwood High School, Colin Donnell decided to take a chance on an audition for the winter musical. Now an acclaimed actor and musician, Colin went from Kirkwood to New York City and beyond, igniting a passion for the arts and a career including numerous Broadway, television and film roles.

"I had grown up singing a little bit but never followed through with anything," Colin said. "I always loved music classes, but I loved to sing for myself, not really in front of people." During Colin's freshman year, his mom noted, "You know, they're doing a musical this winter. Who knows, maybe it'll be fun."

Colin fondly described Karen Flasher, then KHS drama teacher, as a strong influence in beginning his artistic career. He said his first audition was for the musical "Barnum," which includes circus tricks, so he went into the audition with plans to juggle. Although Colin told Flasher he was not a singer, she asked him to sing "Happy Birthday." And that was the spark that ignited Colin's love for theater.

"Looking back on being cast in ‘Barnum,’ it's such a wild circumstance to think that her asking me to sing ‘Happy Birthday,’ after I had already told her that I don't really sing, launched me into a lifetime of pursuing the arts professionally," Colin said. "It's just really wild to think of that one moment turning into all of this, turning into a career and a life's passion, really an all-consuming portion of who I am."

After graduating from high school, Colin studied at Indiana University and then hit New York City. "After a summer of working at the Muny and Stages [St. Louis] again, I moved directly to the city," Colin said. "I had that one-in-a-million thing happen where I got a gig probably a month or two after I moved to the city. It was wild."  The one-in-a-million shot became one of many, as Colin began to book Broadway shows and other performance jobs, such as the musicals “Almost Famous” and “Violet.” Colin described his first lead on Broadway, Billy Crocker in the star-studded 2011 revival of "Anything Goes," as "magical,” dancing alongside theatre legends Sutton Foster and Joel Grey.

"There's so much about [Anything Goes] that was just incredible. It was one of those extraordinary experiences," Colin said. "Getting to sing some of the most beautiful songs in the musical theatre canon, dancing with incredible partners, and being pushed to the limits of what I thought I was capable of."

While Broadway and other large-scale productions are widely celebrated and recognized, Colin emphasized how important it is to increase support for the performing arts at the regional, community, and educational levels. "There are so many studies showing that participation in arts programs is so good for people of all ages, especially young people," Colin said. "It aids in the development of social skills and increases positive mental health. Theater translates well into other areas of people's lives, whether they pursue a career in the arts or not. Supporting community theater, supporting non-for-profit theater, supporting regional theaters is the lifeblood of a community."  Recently, Colin and his wife Patti gathered a group of Broadway friends for a virtual game night fundraiser to support the arts and entertainment industry.  "If I can give back in a way that makes it possible for some kid out there who's struggling to find their own community, it just means the world to me," said Colin.

Among the past year's widespread struggles, the artistic community has been hit hard by the pandemic. Broadway theaters have remained shuttered since performances going dark in March 2020.

"[COVID-19] has really blown open the door of highlighting how desperate our need is to support what is going on in film, TV, arts education, music, every facet of entertainment," Colin said. "We need storytellers. No matter what medium you use to do that, the world needs people who are going to tell stories."

Considering the difficulties of 2020, Colin emphasized the importance of prioritizing mental health. He has strived to use the success of his platform to raise mental health awareness. "It's not taboo to feel these things. It's not taboo to talk about them. It's the opposite," Colin said. "It needs to be out there in the open, and you need to know that you're not alone. People need to know that it's okay to feel however they're feeling at any given moment."

Colin noted there have been several bright moments in the past year. In July, he and his wife, actress and Broadway star, Patti Murin welcomed a newborn daughter, Cecily Donnell. But, not without complications.

"During one of Patti's pregnancy scans, they found a hole in [Cecily's] heart. We knew pretty early on that she was going to have to have surgery at some point after she was born," Colin said. "Usually, they like to wait until the baby is a little bit bigger. Unfortunately, all the complications that come with this condition started to happen very quickly for Cecily." Cecily had to have surgery at just ten weeks old. "It was a difficult time, and fortunately for us, everything was resolved," Colin said. Cecily is now a healthy, happy baby and Colin described his and Patti's gratitude to the hospital staff for their work.

"What those people do for you at the hospital– the surgeons, the doctors, the nurses, the support staff that are there, they're just incredible people," Colin said. "There's no amount of thanks that you can give them to express how grateful you are for what they've done. They gave us a new daughter. It's unbelievable. She's the happiest, most wonderful baby now."

Colin expressed how he hopes to channel his love for his daughter into performing. "It's just this whole other realm of love and caring and selflessness that goes along with it. I'm looking forward to one day sort of tapping into all of that for work," he said. "Because there's nothing more important than her. It all pales in comparison to making sure that she's going to be okay, and I'm doing everything I can to make her life the best it can be."

Even with traditional performances being shut down, Colin has found ways to spread creativity through songwriting. During quarantine, he and acclaimed music director Brian Usifer formed a band called "The Nineteen Twenty," and together released an EP album titled "Chaos + Cocktails" which is available on streaming platforms such as Apple Music and Spotify. "There's a lot going on in the world," said Colin. "We hope you find some good in the music." The album's first track, "Old Fashioned," should be the anthem for the year that was 2020.

"[The Nineteen Twenty] was our cheeky little reference to everything going on in the world in 2020. This whole album would never have happened if it weren't for the shutdown," Colin said. "With so much that has been absolutely devastating this year, we're trying to take the victories where we can. So, we felt like the band was one good thing to come out of it."

There are seven songs on the album. Each one is a fantastic blend of vocals and guitar layered with amazing instrumental arrangements and heartfelt lyrics filled with hope.

Colin said he would like to leave readers with ways to support the arts and encourages the community to look up organizations such as The Actor’s Fund and Broadway Cares/Equity Fights AIDS. An easy way to support is by purchasing Colin and Patti’s recent collaboration with Nocking Point Wines, a wine called the Eleven O’Clock Number. “It’s going to be out on January 1st,” Colin said. “Proceeds from the sale of the wine are going to go towards the Actor’s Fund and also Black Theatre United. They’re working to really expand diversity and the opportunities for people of color in theatre.”

As the performing arts community longs for the day it is safe to return to sharing live performance in a traditional manner, Colin emphasized the importance of supporting the arts until then. "We just can't wait for the day when there's an audience in front of our faces again," Colin said. "It's just going to be great. It's going to be cathartic and it's going to be emotional. Everybody has been very creative, and the community is so resilient in what they do, and how they cope, and how they figure it out, but it goes back to what I was saying earlier– we need the support."

Discover a great bottle of wine with a story and a purpose @ nockingpointwines.com