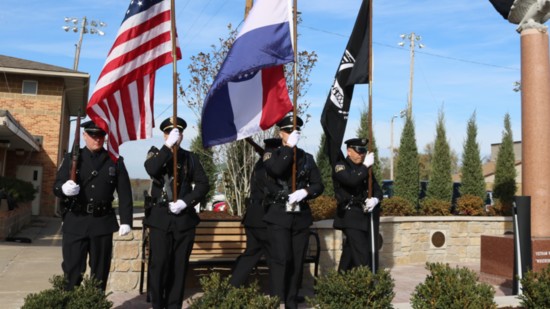 Monuments Throughout the County Pay Homage

Visitors to St. Charles County and locals alike enjoy the many parks, recreation areas and green spaces that populate the region. Added attractions at many of these sites are various monuments and memorials that proudly recognize our nation’s and our area’s military veterans. St. Louis may have recently completed a massive renovation to its impressive Soldier’s Memorial, but St. Charles County also has numerous sites honoring veterans and boasts many beautiful and impressive memorials along with other markers and personal monuments scattered throughout its many parks.

Blanchette Park is a wonderful example of how St. Charles County Parks have embraced area veterans. Within the park, three monuments exist. Two are fairly subtle, as many markers are within the parks; stones or flag pole bases are adorned with plaques commemorating or memorializing the local veterans. Blanchette Park also houses Memorial Hall, dedicated to honoring local veterans. The large stone and plaque out front honors local soldiers killed or wounded during the Civil War. The dedication of this monument was November 1928, making it the oldest of the St. Charles County official memorials. Memorial Hall has been recently renovated and is available for rent, with space for just about any size event. Much like Blanchette Park, many other public spaces have simple monuments commemorating veterans in general, the various branches of the military and individual wars.

The St. Charles County government office building near Historic Main Street has its veterans memorial, located off the south end of the building and grounds. Like many of the monuments around town, it consists of flags of the United States, Missouri and St. Charles County. Similar to other monuments, it has a large stone structure that dominates the memorial with an inscription plaque honoring all veterans, living and dead. These first examples are typical of many of the community’s memorials scattered throughout the county. They proudly occupy a corner on a piece of government property or sit peacefully in local parks.

Wentzville boasts the oldest Vietnam Memorial in the United States. It sits unassumingly in front of the Fire Hall and Fireman’s Park. The single column with an eagle perched atop is enhanced with lighting after the sun goes down. This monument was erected in 1967. It is now part of the annual Run for the Wall, a cross country motorcycle ride to the Vietnam Memorial in Washington D.C. each May.

The Wentzville Historical Society is working to complete a new WWI and WWII memorial. It will be located in Bicentennial Park (22 West Pearce Boulevard), just down the street from the Vietnam Veterans Memorial.

The memorial is a replica of a previous structure, which was built during WWII. That structure fell into disrepair and was removed several decades ago. The original memorial was actually an Honor Roll, which listed the names of the Wentzville residents who served during WWII. The new monument will also include a WWI tribute on the reverse side. This tribute is a replica of a design poster which was created during WWI to commemorate the war activity that occurred.

With today’s more modern construction materials and techniques, it is expected that the memorial will last for many years into the future. The base for the memorial has been erected, and the honor roll names and WWI design poster are expected to be completed this summer.

Bishop’s Landing near the Lewis and Clark Boathouse Museum near Frontier Park has the beautiful St. Charles Veterans Memorial. With the Missouri River rolling nearby, this is a relatively peaceful locale. The large black pentagon is adorned with a plaque for each branch of the military.  An eagle sits atop, and the entire “island” is surrounded by accent lights and flag poles. Benches nearby offer space for quiet reflection.

The St. Peters Veterans Memorial is located at the City Centre. It was dedicated in 1998 and now is part of many annual commemorations, such as Veterans Day, Memorial Day and Pearl Harbor Remembrances. Since the events of Sept. 11, 2001, another portion of the site was added to the project in 2003—the Field of Honor, which consists of six rifles with helmets atop, surrounded by fountains.

Another companion memorial to the larger structure, aptly named Veterans Memorial South, was dedicated in 2008. There are both Vietnam and Korean War Memorials here and a very moving structure with the names of local soldiers killed in combat in both wars.

St. Charles County Parks Department officially dedicated Veteran’s Tribute Park on Kisker Road in 2018. The Park is filled with great family activities including sports, fishing, a dog park, children’s activity/splash park and lots of trails that wind around the park for well over a mile. The County Parks Department has started construction on the veteran’s memorial there and is planning to have it completed in time for Veterans Day.

Lake St. Louis’ Veterans Memorial Park near the City Center is another inviting and moving monument within a quiet green space and waterfall nearby. Several small monuments surround a large center star in the concrete and tell the story of America’s history at war, dating back to the Revolutionary War. Each monument counts total soldiers who died in combat and those wounded. It is truly humbling to contemplate the lives affected by war.

O’Fallon completed their Veteran’s Memorial Walk in 2001 on a large plot of land on Belleau Road at Interstate 70. This incredibly moving structure includes dozens of marching, bronzed boots spanning the grounds in front of the large monoliths commemorating the different branches of the military. The site also boasts an eternal flame and separate memorial to POW and MIAs with a single pair of bronze boots. Once again, this site is home to many annual ceremonies, including Armed Forces Day in May and POW and MIA Remembrance Day, every third Friday in September.

The citizens of St. Charles County have embraced honoring our military veterans and fallen soldiers, both past and present with these many beautiful monuments. In addition, the new St. Charles County Veterans Museum just opened this spring at 410 East Elm Street in O’Fallon. There, you will find stories of those who served our country, including Ralph Barrale, who said, "No one is ever gone, as long as someone still has memories of them."

“No one is ever gone, as long as someone still has memories of them."