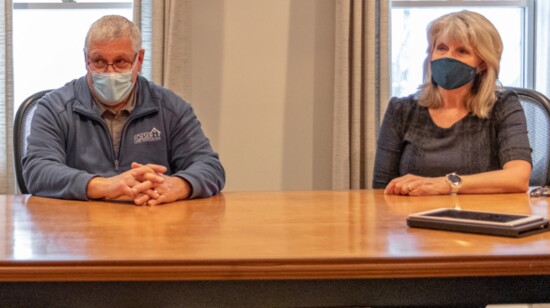 The House that Joe Built

Joe and Cindy Roeser talk about building their business for its next generation of leaders, Brandi Ward and Mark Talley

In 1977 Joe Roeser purchased a one-bedroom, one-bathroom house on Evans Avenue unbeknownst to his finance Cindy. (Spoiler Alert: The couple will celebrate their 44th year in that house this October.)

The plan was to live there for five years while the young couple remodeled this fixer upper. "I always loved working with my hands," Joe said. "When I was little, I would build projects out of wooden produce crates." One of those childhood projects, a wooden church that Joe built in the '60s, sits proudly on a shelf in his office.

After high school, Joe became the residential project manager for a local kitchen and bath contractor. "That's when I fell in love with residential remodeling," Joe said. As Joe learned the trade, he completed remodeling projects on his own house. The expansion of Joe and Cindy's family resulted in the expansion of their house. "We added another room every time I got pregnant," Cindy said.

The Roeser's had three kids (Kim, Brandi, and Trey) under the age of five when Joe decided to go into business for himself. "I supported Joe, but I was scared," Cindy said. Joe joked that he told Cindy he wouldn't let her starve, but neither could imagine the journey ahead.

"Because we didn't have a business background, we did everything the hard way," Joe said. He independently managed the business for the first three years and then asked Cindy to join as the bookkeeper. While Joe worked closely with clients to build their dreams, Cindy built the company's structural foundation. She became heavily involved with the HBA and Professional Women in Building. "It's been very rewarding to have Cindy involved with the company," Joe smiled humbly. He recalled people at HBA events saying to him, "Oh, you're Cindy's husband." Joe said, "I feel proud of Cindy because she has accomplished so much."

As the company experienced growing pains, Cindy had the foresight to join Remodeler's Advantage, a peer-to-peer mentoring organization. "It was the most painful thing we've ever been through, but the most rewarding. We wouldn't be the company we are today without the support of that organization. Our mentors told us the hard things out of love because they wanted us to succeed," Cindy said.

The concept of mentoring and wanting someone to succeed was not new to Joe. Joe describes how their longest employee, Mark Talley, joined the company. "A neighbor called and said they knew an ambitious young man who needed a job," Joe said. Mark was hired as an apprentice in February of 1995 and soon became a constant frustration for the carpenters he worked under. The carpenters claimed Mark was useless because he kept making mistakes. "They wanted me to fire Mark," laughed Joe. But Joe saw something in the nineteen-year-old. Perhaps Mark reminded Joe of himself at nineteen, or maybe it was Mark's relentless work ethic. "This kid would come in early every workday morning. He would bring coffee and doughnuts to the craftsmen even though he knew how they felt about him." Joe lent Mark some tools and taught him how to work through the challenging projects.

"When I started out, I didn't know what I was doing," admitted Mark. "But I showed up for work every day, and I stayed until the truck was empty. I remember thinking, "How am I ever going to be able to do these jobs?" His nervousness on the jobs earned him the nickname "The Cardiac Kid." But Mark smartly followed the ideology he learned of "stealing with your eyes." He watched everyone and everything. "Here I am 23 years later, and there is nothing that scares me," Mark said. In fact, Mark is honored and enthusiastic about leading the next chapter of Roeser Home Remodeling as Joe and Cindy prepare to hand their company over to Mark and their daughter Brandi.

"It's hard for Joe to let go of the reigns," Cindy said. "This company has always been Joe's dream. It became my dream because it supported our family, but it really is hard for Joe."

As Joe and Cindy were considering their retirement, they knew Mark would always have a place in the company. He had become like a second son to them. What came as a surprise was their three kids' interest in the company as their parents discussed their retirement. Their oldest daughter, Kim, a nurse in South Carolina, said she wasn't interested in being a part of the business, but she wanted it to stay in the family. Their son Trey, a talented carpenter with solid business skills, expressed interest in being a part of the company. But his commitment to his family in North Carolina prevented him from moving back to St. Louis. Brandi, however, was eager to take the company forward. After graduating from college with a Fine Arts degree in design, she joined the company to develop Roeser's showroom. "Mom and dad wanted someone to shop and help with the selections. I said I would love to do that. So that's how I fell into the business," Brandi said.

Today, Brandi joins Mark as the future co-owners of the company. What does the next generation look like for Roeser Home Remodeling? "We want to keep the level of service the same," Brandi said. "I'm like my dad. I love working with clients, going above and beyond." Mark agrees, saying that, "Joe is a handshake and 'you have my word' kind of guy. We want to keep that." But at the same time, the new leadership team recognized the need to keep up with the industry's changing technology.

"We brought my husband Gordon in to lead the technical side of the company," Brandi said. Gordon is a tech-savvy graphic designer who streamlined the digital communication process and introduced 3-D drawings to enhance the customer experience.

Brandi said she loves having her husband join her at work but acknowledges the struggles of being a working couple with two young kids. "It's challenging. That's why I'm grateful I have Mark."

Brandi and Mark have a symbiotic relationship perfect for co-leading the company. After 23 years with the Roesers, Mark has seen it all. Joe pointed out, "He's experienced in managing the guys in the field and maintaining service quality. Not to mention he's an expert craftsman. He always wanted to be an accountant and work with numbers. We got really lucky with Mark." Was it luck? Or was it that Joe took the time to work with Mark to develop his potential?

Reflecting on what Joe has built over the years, it's easy to see the parallels between his starter house and his close-knit family business - love, family, untapped potential, roots, growth and a remarkable legacy.

When asked if they are finished adding on to their home on Evans Avenue, Cindy laughed and said, "Oh no. I have a vision for the future. We've never moved, but our house has changed in many ways." Joe and Cindy will live there forever. "We live what we speak," Cindy said. "If you are a Roeser client, you are a client for life."