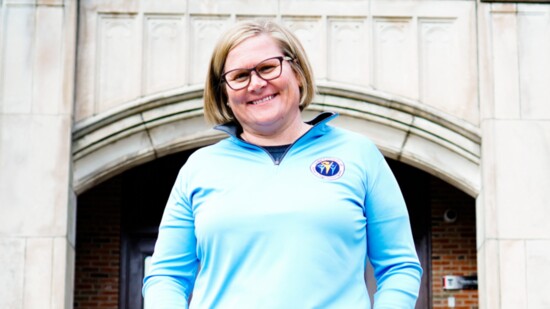 The Power of Being the Only Woman in the Room

Jen Brooks has been named the 2020 Athletic Director of the Year for the State of Missouri. The award has been in existence for 47 years. Jen is the second woman to win this award.

"I work in a male-dominated industry," stated Jen. "Often, I am the only woman in the room."

As the athletic director at Ursuline Academy for over 25 years, Jen described how people judge who she is because of what she does. "I am seen as too feminine and too masculine at the same time," explained Jen.

Referencing the frequently quoted description about Ginger Rogers (Ginger Rogers did everything Fred Astaire did, but backward and in high heels.) Jen talks about the challenges of being the only woman in the room. "I have the exact same job as my male counterparts, but it's a higher degree of difficulty because of the preconceived notions about being a woman athletic director."

She explained, "I'll be honest, I was intimidated. It took me years to find my voice. I run the introvert / extrovert line, so speaking up was out of my comfort zone."

Eventually, Jen knew she had to move from feeling intimidated to feeling empowered.

"Finding my voice wasn't just about me," stated Jen. "I needed to use my voice to speak for those that can't be in the room or at the table." She went on to explain, "This is also about the women who go to Ursuline Academy. It's about me helping them find their voice and helping to create a space for them, making their journey far easier than it was for me."

In August of 2017, Jen founded the Global Community of Women in High School Sports, an online leadership organization that develops, connects, and advances women working in high school sports. Jen said, "I want to make space for other women and the next woman who will sit in this chair after me."

Today, Jen speaks passionately and publicly about challenging the athletic industry to redefine, reimagine and change the narrative of what it looks like to be a high school coach or athletic director. However, Jen's message isn't just about women in sports; it's about all women who find themselves as the only woman in the room.

"98% of girls will never play sports again after leaving high school," said Jen as she talked about connecting with all the students at Ursuline - not just the athletes. Jen explained, "I sent an email to all the students saying, 'If you are thinking about being a coach or athletic director, I'm here to help you. And if you are considering going into a male-dominated profession, I've got some tips that I would be happy to share.'"

The importance of Jen's message cannot be understated. "These are real-life lessons," Jen said. "Have confidence. Give yourself permission to be your authentic self, knowing that your authentic self will make mistakes. And that is ok." Jen emphatically added, "Never apologize for asking questions, voicing your opinion, or trusting your instinct. Never allow yourself to be labeled. Stand up for the people and causes you believe in. Stand up for being you. That's finding your voice."

"Just because you are the only woman in the room doesn't mean you have to feel alone," Jen stated as she described how men can champion their female counterparts. "Men are the missing ingredient when it comes to gender equality. We need men. Their words have power. Words are still associated with gender."

While there have been many positive changes, there is still a long way to go. Jen's goal is to make men aware of what it looks and feels like to be the only woman in the room.

"If you see someone talking over a woman, say something. If someone takes credit for something a woman has done, speak up. Make space for women at the table both literally and figuratively," Jen said. "When men invite more women to the table, that is a huge step forward."

Jen noted that many men say they are allies for gender equality, but their public words and actions don't play out as allies with women. Jen laughed and said, "Men will come up to me and say they are a 'girl dad' as if to show their support for women. But simply being a dad of girls doesn't make you an ally." Jen's gender awareness campaign continues as she speaks to new audiences.

As the mentor coordinator for the state of Missouri, Jen works directly with new athletic directors across the state. "I didn't really have a mentor. And it's necessary. I fumbled around and created my own path, but I don't want it to be that hard for the next person." As the first athletic director at the high school level to be on the coach's council for WeCOACH, Jen is excited and energized about high school sports' future culture. "I've had women coaches comment that it's great to hear they are not alone. I've had men reach out to me and ask me how they can better coach their female athletes."

At the core of all of Jen's roles and responsibilities is her love for Ursuline. "I love this place with my heart and soul. I love the girls. I love the mission of Ursuline." Jen also loves the fact that her daughter, a 2016 graduate from Ursuline, serves as the school's volunteer basketball coach.

As Jen reflected on being a leader, a mentor, a change agent, and a mom, she commented, "I no longer think of myself as the only woman in the room, but rather the first." 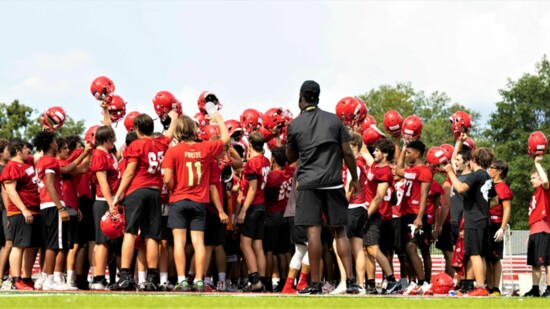