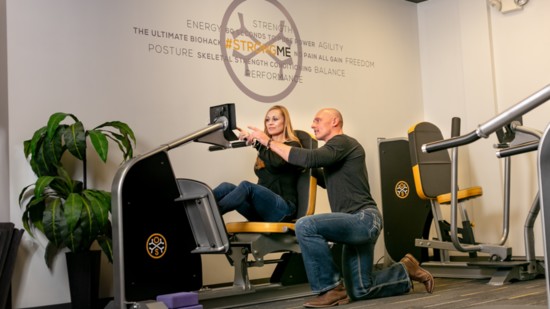 Where does one go to recover individual bone loss?

While OsteoStrong Clayton is a unique place to go to improve overall health by focusing on one's skeletal system, it is not a gym, diet, supplement, pharmaceutical or medical treatment.

"The skeletal system is the foundation for your body and provides more than just strength and protection. It's arguably one of the most critical systems of the human body," says Jason Hicks, owner of OsteoStrong Clayton.

He says OsteoStrong members experience less joint and back pain while improving bone density, posture and athletic performance. He adds that it's a once-a-week program for 10 minutes with patent-pending technology to help naturally increase strength, reverse osteoporosis, improve balance, and help reduce HbA1c levels for those with Type 2 diabetes.

"It's for all ages, all levels of fitness, and you can come dressed as you are," he adds.

Jason served in the US Marine Corps and US Navy before a 20-year corporate career in information technology security. "My health and fitness background spans nearly a lifetime, but more recently has included various components now referred to as 'biohacking,' which is the use of science and technology to trigger desired behaviors or changes in our biology in the most direct or efficient way," he adds.

Jason says he found out about OsteoStrong unexpectedly at a Tony Robbins seminar where guest speaker and chief executive officer Kyle Zagrodsky spoke passionately about the compelling science and research of osteogenic loading. "To say I was intrigued is an understatement," he confides.

"Everyone deserves to live a healthy and vibrant life, regardless of age. I also believe that the purpose of my life is to leave people better than I found them," says Jason.

He states the most exciting part of OsteoStrong is the potential to play a role in helping others attain new levels of personal freedom by unleashing significant increases in functional strength and performance, and by decreasing pain, or achieving both.

OsteoStrong even helps strengthen the bone around hip or knee replacements, says Jason. Or, he says it's good for preconditioning before these types of surgeries.

OsteoStrong is based on the premise that is takes four times the bodyweight to grow and increase bone density. The most efficient way to do that is through high impact "loading" or high levels of pressure.

At OsteoStrong, four specialized machines hold participants in their strongest body position to exert as much force as possible without risking injury. The machines provide feedback on their force production, or how much pressure they're exerting, and tracks their results for each session.

Many OsteoStrong members say they like how quick and simple it all works. Each movement takes just a few seconds, and there is always a trained coach who's with them throughout their session.

Liz holds a bachelor's degree in psychology from Illinois Wesleyan University and a master’s degree in exercise physiology from Southern Illinois University, Edwardsville. At IWU, she competed on the track and field team, which she says inspired her to pursue an exercise-related career focused on positive long-term health outcomes for others. "I enjoy helping people to achieve strength and fitness goals they never thought possible," she says.

Jessie holds a master's of science in nutrition and exercise physiology from Southeast Missouri University. She's always had a passion for health and wellness and says she's enthused about helping others incorporate OsteoStrong into their routine to support their overall health. "Embracing a healthy lifestyle will allow you to live your life to its full potential," she adds.

Steve’s Tschudy's mother was diagnosed with osteoporosis, but it was his sister who discovered OsteoStrong. Steve’s sister began using the technology to prevent the problems associated with loss of bone density. Steve decided that opening an OsteoStrong was a natural response to his family's situation and his own interests in physical health.

OsteoStrong founder and president Kyle Zagrodzky started the company in 2014 with the idea that he wanted to help people in a way that was beneficial to all ages and types of people. At 41 years old, Kyle suffered from severe back and joint pain and sought to create a natural solution that would relieve his long-term discomfort. He came up with the OsteoStrong method, which now is available at well over 100 locations across the globe.