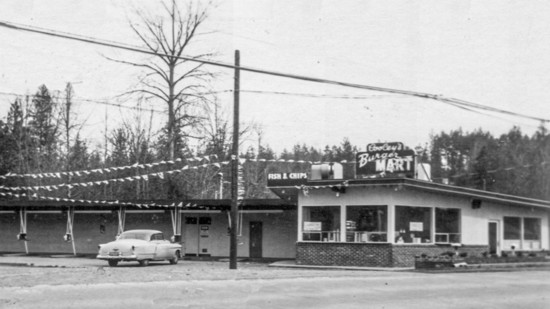 Did You Take Your Flame To Frosty's?

A Look Back To Kirkland's Hot Spots

The restaurant business has always been a tough one, but obviously this year’s COVID shutdowns have hit Kirkland restaurateurs harder than anything since the Great Depression.

Lots of Kirkland restaurants have come and gone over time, naturally, but some of them endure in our memories for years, or even decades, after their doors closed.  For this month’s food and beverage issue, here is a look back at a few of the places where Kirklanders like to eat.

By 1951, in the wake of WWII, Kirkland had emptied of much of its wartime population. War workers and often their families who had crowded into the Kirkland area to staff the Lake Washington Shipyards on Yarrow Bay—today’s Carillon Point-- in the old Town of Houghton, Ballinger Boat Works and related industries serving the needs of all those new residents.

The King County ferry Leschi made its last run to Seattle in 1950, thus ending about 80 years of direct boat transportation between Kirkland and Madison Park. After that a trip into Seattle from Kirkland meant either taking the Bothell Highway around the north end of the lake or taking the highway south to Mercer Island and crossing the world’s longest floating bridge,  which had opened in 1940. Kirkland was then a sleepy small town, its boundaries mostly around the downtown, Market and Norkirk neighborhoods. Juanita, Rose Hill and the other outer neighborhoods were all still agricultural and timbered and as mentioned Houghton was then an independent, incorporated fourth-class town.

But in 1951 a Kirkland dining tradition was born, thanks to returned WWII Army veteran James Cooley and his brother Robert. In that post war era private aviation was booming, even Finn Hill boasted a small airstrip off Juanita Drive where the QFC, Bartell’s and other businesses today occupy the Inglewood Village Shopping Center. With millions of former pilots and flight crewmen back in civilian life many had turned their wartime vocation into a postwar advocacy.  At the same time, many Americans—especially in the Puget Sound area—were creating a recreational boating boom, with many constructing home built, tailorable outboard runabouts and small inboard cabin cruisers.

The Cooley brothers had a vision: an upscale steakhouse (at least by 1951 Kirkland standards) located close to the water, where diners could sit and look out at the lake and enjoy drinks and the then burgeoning surf and turf cuisine. What added novelty to their concept was its marketing, diners were encouraged to arrive by boat or floatplane. You could put your boat in the water, or plane in the air, enjoy a cruise or flight and cap it all off with a great steak dinner—revolutionary thinking for its time and what a great way to bring diners’ dollars into Kirkland.

With this, The Flame Restaurant was born and odds are good that if you were a Kirkland area kid in the 1950 through the 1970s that was one place mom and dad dressed up and went for a nice dinner out. Its revolving “CharBroiler” sign was a downtown Kirkland icon for decades.

The Cooley brothers sold The Flame in 1957. James saw suburbanization was semi-rural Kirkland’s future and he moved on to another postwar restaurant niche and 1950s mainstay: the drive-in burger joint. Location number one for Cooley’s Burger Mart was located right across from Juanita Beach. Juanita land was quite affordable then and cinder block construction was revolutionizing inexpensive commercial construction in those days. Location number two was built on Rose Hill. It did not take long for the franchise concepts to take over this sector and in the early 1960s concepts like Arctic Circle and A&W came to the Kirkland area, among others. After a few years the Juanita Cooley’s Burger Mart building was sold to a small local fish and chips franchise established on Alki Beach back in 1935 and Spud fish and chips has occupied the space ever since.

Back in 1910 Peter Kirk’s Kirkland Land & Improvement Company still owned much of the Kirkland townsite and many surrounding areas after its failed effort two decades earlier to create a steel mill city, a “Pittsburgh of the Pacific'', on the east shore of Lake Washington. That year an elderly Peter Kirk and the other directors decided to divest of their real estate holdings, which were sold to Seattle developers Edmund Burke and Ambert “Burt'' Farrar, of the real estate firm Burke & Farrar. The old Kirkland Land & Improvement Co.’s land was replatted into residential lots, Burke and Farrar’s new vision of Kirkland was as a quiet, residential Seattle suburb, in which residents could enjoy a bucolic country life a mere 20 minute boat ride away from Seattle.

Burke & Farrar were aggressive advertisers in local newspapers and had sales offices at the Madison Park and Kirkland Ferry docks; with Kirkland’s location occupying different buildings at different times over the years. The idea was, prospective buyers would be greeted by salesmen as they walked off the ferry, and from there shown homes and/or building sites and then taken back to the sales office for closing. Their offices became smaller as the years went on and the final ferryside office was a small structure at the foot of Kirkland Avenue, the very first business one would pass when exiting the slip. That little building passed through different hands over the years, but given its diminutive size had limited uses, it quickly fell into restaurant use over the decades and remains so today as well known and popular The Slip.

Another well-remembered Kirkland area eatery has only been gone now for a few years, Frosty’s, in Juanita. Frosty’s opened in 1962 on 98th Avenue NE across from a plot of woodland, but actually had its origins two blocks south around 1950. Roy’s Market was a Juanita Junction (98th Ave. NE and NE 116th St intersection) institution for decades until the property was developed into the Columbia Athletic Club in the 1970s. Roy’s Market was a small town store out of a Hollywood movie set, right down to the wooden screen door that squeaked when opened and slammed itself closed with an old spring. A café was added in 1950, but was operated independently by Phyllis Hoenhous and Virginia Kissinger. As the café grew in popularity it was clear that expansion was the next step, and that more space was needed, so the two restaurateurs put together a deal with a landowner and developer to build them a new restaurant to lease. From that point on, the only sign always said “Frosty’s.” It was quite popular for decades; offering breakfast, lunch, dinner and a cocktail lounge—at a time when there were not a lot of places for grownups to get a drink in or around Juanita.