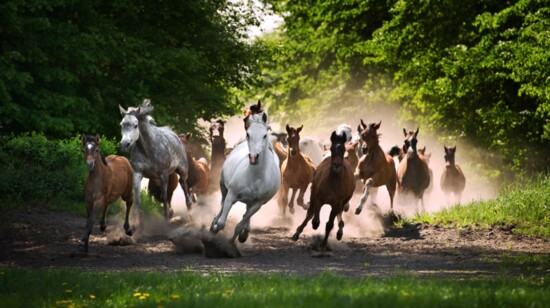 The Journey of a Horse Photographer

If you are a horse person, or know a horse person, then you know it’s a thing. And by thing I mean more than just a hobby. It’s a passion, a lifestyle, dare I say borderline obsession. Horses are like family to those that own them and show them. And just like with family, and how we love capturing keepsake photographs, Beaux Arts Resident, Stuart Vesty, does just that but primarily for Arabian horses. He has received the Arabian Horse Times Reader’s Choice Photographer of the Year six times here in America, and once in their overseas edition. He’s also received a few Honorable Mention awards for Wildlife Photography in International competition. Not only that, as a rider, driver, and handler he’s received numerous National awards in the show arena. Just how does one become an Arabian Horse Photographer?  Read on…

Tell us a brief summary of your career.

After two years at the Rochester Institute of Technology in Rochester, NY with an Applied Science degree in Photography, I was told to pick a specific application of photography to major in my last two years. I told my professor I was going to specialize in Arabian Horses.  When he told me I would never be able to make a career in that, I immediately went out to prove him wrong. A few years went by before I could survive on my photography work alone, but in 1987 it became my sole income. I primarily photograph show horses for promotion prior to competitions, Stallions and their foals for promotion in breeding sales, and horses offered for sale.  Portraits of owners with their horses and “keepsake” photos make up a good portion as well. I am so grateful to be able to do what I love.

What do you like about being a horse photographer?

After spending a few brief attempts as a horse trainer, I realized that delayed gratification wasn’t my style, and I knew I would never have the very best horses in my care. Photography has allowed me to be part of many great horse’s lives and has introduced me to so many amazing people. I have travelled all over the world, so I’ve had the opportunity to see and experience things that many people only dream of.

My mother grew up showing American Saddlebreds, but ultimately gave that up to have a family. After I was born (the youngest of four), my grandfather bought us a couple ponies and a Half Arabian. A purebred Arabian was soon to follow. Going to Horse Shows was my family’s passion during the summers, and I couldn’t imagine not having them in my life forever. Arabians are the most beautiful, expressive, intelligent and versatile horses I’ve ever known, and they make up 95% of what I photograph. That’s primarily because of the circle of clients I work with, but I have successfully photographed many breeds of horses.

Do you remember the first horse you photographed?

I have always been fascinated by photography and took WAY too many photos when I was a kid. My mother was constantly taking film to get developed for me, so when she finally said “This is costing me a fortune!”, I decided to focus on a couple horses my brother had in training. I can’t remember the horse’s name, but when I handed the owner the photos she said, “These are beautiful, you should do this professionally!” I replied, “Dig deeper, there’s an invoice in there somewhere! ;) "

What do you think makes a good horse photo?

Knowing your subject is the most important part of getting good photos of a horse. There’s a big difference between a beautiful photo with a horse in it and a beautiful photo of a horse. Breed/discipline standards are important to understand and adhere too. Balance and expression are necessary. I pride myself in being a horseman first and a photographer second, so I’m comfortable adapting to changing conditions. Because time is limited and weather and lighting are unpredictable, being able to improvise is a huge asset.

Any specific shows or cities you like shooting best?

For 19 years I was hired to photograph the catalog for the annual Poland State Stud Arabian Horse Sales, so Poland holds a big place in my heart. Australia is also on top of my list. Needless to say, travel out of the country hasn’t been easy lately, but I’m hopeful that will change soon. I am extremely grateful to my loyal clients here in Washington and around the States.

Tell us a few experiences that stand out over the course of your career.

Well, they’re all an experience!!  Nothing can be completely scripted when working with animals, but for the most part the sessions themselves go fairly smoothly.  During a session where we had turned several horses loose (separately) in front of a small lake on the farm, each one trotted along the bank beautifully.  Then, there was “Eugene”.  Rather than running off and putting on a show along the edge, he slowly looked toward the water, thought about it for a few seconds, and then quietly walked in to the lake.  Before you knew it, all you could see was eyeballs and nostrils.  Pretty much looked like an alligator.  As we all panicked, unable to do anything, he swam in circles for 10 minutes.  Finally he came out on the far side of the lake, shook off and trotted straight back to the barn and in to his stall.  He laid down and slept for 3 days!

Lots of the memorable stuff happens outside the actual shooting. After a successful session in Sao Paulo Brazil, we all went to a Night Club. Knowing we weren’t in the best part of town we were all a bit on edge. Shots rang out and my friends started diving under parked cars. Actually, a car had just backfired. I found it to be much funnier than they did. I have met numerous celebrities over the years and on my first trip to Jordan I was shooting for the King’s sister. I have never met Royalty, so was a little intimidated to say the least. When she greeted me in a Penn State sweatshirt, I knew everything was going to be ok. For the most part, people are much more normal in reality than they are in our minds.

How have you seen the horse industry change over the course of your career?

Just about the time I started shooting full time, tax laws changed and the Arabian Horse Industry was really hit. Fortunately, it didn’t really affect me because I had nothing to lose. Over the past few decades, the quality of the horses has improved greatly, the international market has grown and classes have been added in the show ring to accommodate newcomers and exhibitors of all ages. For kids and adults alike, I know there are farms within an hour or two away that would be happy to help satisfy that inner urge to build a relationship with these beautiful animals.