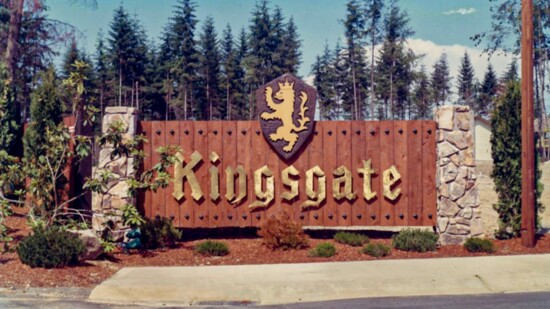 Kirkland’s population in 1970 was 14,970, a far cry from today’s nearly 90,000. Many neighborhoods comprising modern Kirkland were then unincorporated King County and transitioning from rural acreage into suburban subdivisions. Ditto with Bellevue, incorporated in 1953, whose 1960s-2000s annexations gobbled up unincorporated land north to Kirkland and east to Lake Sammamish.

Incorporated in 1905, Kirkland is the oldest and, during the 20th century’s first half, the Eastside’s dominant lakeshore city. The first floating bridge connecting Seattle to Mercer Island opened in 1940, so post-WWII Bellevue swelled as the first subdivisions, starting with Lake Hills, began replacing berry farms and cow pastures. Until 1950, Kirklanders still relied on a ferry to cross the lake, but that all changed on August 28, 1963, when the second floating bridge opened, connecting Seattle to the Eastside and creating housing booms.

Far-sighted developers didn’t wait for the bridge opening. To them its impact on the Eastside was a foregone conclusion and represented huge opportunities. For example, a legal notice in the May 16, 1963 Seattle Times revealed that two companies, MacLand, Inc. and C-Land, Inc. (development subsidiaries of MacPherson’s Realtors and Coast Mortgage and Investment Co.) sought a zoning change from RA agricultural to R7 residential on a land parcel located in Juanita for their newly created land plat called Kingsgate Highlands Division One.

Anticipating the new bridge’s impact, the developers had purchased rural Juanita land parcels totaling about 450 acres to be developed into Kingsgate, a massive five-division planned community, boasting an Olympic sized pool, playgrounds and other (at the time) deluxe amenities.

In 1942, 10 year-old Kenton Pies’ parents moved the family from Illinois to a two-story log cabin on Potato Lake, near rural Spooner, Wisconsin. From a young age Kenton had an aptitude for art, but also for carpentry and even masonry, after helping his dad build their massive river rock fireplace and chimney. By high school graduation in 1950 he had won drawing contests and his art was used in the yearbook. After a commission to paint a sign on a billboard he began painting signs and vehicles for businesses. He enlisted in the US Army in 1952, where he painted signs, receiving an honorable discharge in 1955 at Fort Lewis. He enrolled in the University of Washington and worked his way through college painting signs. He continued after graduation and his signs began incorporating various new materials and skills, like woodcarving. He painted names on boat transoms and bartered float plane flying lessons with Lake Union Air Service for painting them a sign. Kenton met Barbara Roth in early 1962 while both were working at the Century 21 world’s fair and the two married later that year.

Kenton said marriage changed his perspective. Working out of the garage of his Seattle home he expanded his tools and techniques to encompass more wood carving and work with metal, as metal wall sculptures were popular at that time. In 1967 his company merged with a glass laminating business, incorporating as Architectural Designs, Inc., producing thick wood signs, church windows, doors, and even shower enclosures. His work with church glass led to innovating a resin technique that facilitated production of light lenses, and around those he created from metal and/or wood custom and production hanging lamps, which were popular in 1960-70s décor. It was this technique that he applied commercially in 1969 in the well-remembered sign for Bellevue’s Thunderbird Motel, which was demolished in 2008 to make room for I-405’s NE 10th St. overpass.

Kingsgate’s visionary, Murdock MacPherson, of MacPherson’s Realtors, had worked with Kenton in the early 1960s on various Eastgate area subdivisions, having commissioned entry signs. MacPherson wanted the Kingsgate divisions to have the most outstanding entrances on the Eastside, so he called Kenton, who crafted the well-remembered, acclaimed Kingsgate entry monuments--the Pièce de Resistance being the unforgettable monument to Division 5’s entry, the Kingsgate Castle. Over the decades, Kenton also created entrance signs and monuments for Queensgate and numerous other Kirkland subdivisions, neighborhoods and businesses.

In 1971 the Puget Sound Land Company petitioned the US Board of Geographic names to officially adopt “Totem Lake” for the small lake off NE 124th St. (variously called Wittenmyer, Watstine, and most commonly, Mud Lake). It had acquired 200 acres immediately north of the lake and planned a 200 acre, multi-phased development called Totem Lake Center, the first phase consisting of Evergreen Hospital and surrounding medical-dental offices and businesses, and the second phase a shopping center designed with a Pacific Northwest Native theme (even though local tribes did not craft or use totem poles) with the mall interior reminiscent of a Duwamish longhouse: Totem Lake Mall. Opening tenants included Ernst/Malmo, Pay-n-Save, Shucks Auto, Olson’s Market Place and a new Standard Oil station.

By then Kenton’s company was based in a 20,000 square foot shop on Pier 91. Already acclaimed for carving totems and signs in native motif, he was the logical choice for the mall’s developers and was contracted to create the sign, benches and numerous totems and interior details for the project, including its main sign, a 48-foot tall carved bird with a 24-foot wingspan. Kenton directed his staff architect in the design work and had to hire three additional woodcarvers for the job.

Likely inspired by the popular folk group Peter, Paul and Mary’s 1962 hit song, “Puff the Magic Dragon”, in 1965 Kenton’s friend and client Larry LaFollette approached him about commissioning a dragon play sculpture for what is today Mercer Island’s Deane’s Children’s Park. A radical departure from the galvanized pipe swings, monkey bars, and merry-go-rounds of that era, the dragon, completed in 1966, was designed mostly for pre-school and Kindergarten-aged kids, and was sculpted from concrete over a fence wire covered frame, featuring a small slide, stairs, and a hollow interior to crawl through which was perforated with entry and observation holes. To say the dragon was popular is an understatement, it was beloved by generations of island and surrounding communities’ kids. In fact, the official park name is less recognized than its informal name, “Dragon Park”.

By 2012 the venerable, much loved, nearly half-decade old dragon was succumbing to age, so Mercer Island’s Parks Department was faced with either restoring or replacing it altogether. City coordinator of cultural art and events, Amber Britton, had a great idea: What if we replace the dragon, but commission a new one from the artist who built the original? Who was he? Is he still in the area? Is he still alive?

Britton set to work contacting participants in the 1966 effort. She eventually learned Kenton’s name and tracked him down in Montana, retired (sort of) at age 81. Kenton loved the idea and designed a larger dragon to facilitate easier access. Working with Derek vonHeeder in vonHeeder’s Plains, Montana, metal shop, the two men fabricated the new dragon’s framework into sections and trucked them to Mercer Island for assembly on the (modified) original pad. Next, Kirkland’s Edge Concrete troweled, coated and textured the framework with concrete and Kenton hand carved the dragon’s scales. Instead of paint, Kenton ordered a green acid stain for a longer lasting finish. Dedicated November 16, 2013, attendees included grown former island kids who had played on the original dragon and seniors from that 1965 committee.

It was Kenton’s final major commissioned piece; a fitting capstone to a 63-year career that touched in some way most Eastsiders of that time, even if they never knew his name.

If you would like to learn more, you can purchase Kenton's three book set about his career at: https://www.amazon.com/Innovative-Creations-years-concrete-Kentons/dp/152365544