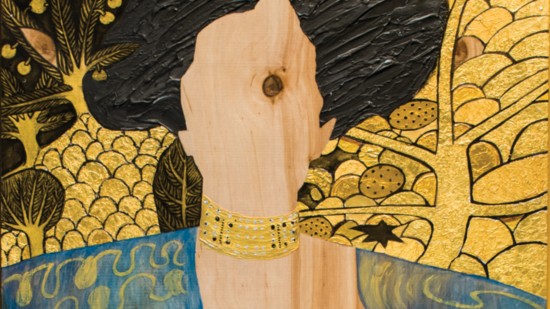 Something to Talk About

It’s been said that idle hands are the devil’s workshop. But if you’re a young girl who, along with her two older brothers, had the run of a Wuthering Heights landscape in a small North England village called Embsay, idleness can lead to a love of the outdoors and a life of artistic creativity.

Lynette Charters made art even before she can remember doing so. She recalls watching her mother draw at home, and perhaps this inspired her own sketches starting at the age of 3. Her mother was a language teacher, and Lynette’s father ran a furniture factory. She surmises that maybe this is where she found her love of wood, but more on that later. In the 1970s, the Yorkshire Dales district had yet to realize a full post-WWII recovery, and people had to take care of their own and make their own entertainment. Her father served on a search-and-rescue team, often called out in the middle of the night, striking a heroic figure in his daughter’s eyes.

Lynette’s art education included various disciplines, and she originally wanted to focus on graphic art. Instead, she gravitated toward collage, which prompted her instructors to say she was “not behaving like a graphics person.” Her predecessors at Bradford College, where she did her art foundation year, include David Hockney and Andy Goldsworthy, who Lynette ended up working with on two of his outdoor sculptures.

“Andy used the landscape as a canvas," Lynette says, “and I learned a lot about how to attract people’s eyes to where you wanted them to look in an image.”

This experience in the wilderness, well before the advent of smartphones and social media, was formative.

Lynette recalls that when she was an MFA student in Chelsea, “All of my work was based on communication. I felt like I had something to talk about.”

After graduation, however, an opportunity arose to do animation, and the plan was to work in that field for a year or two, make some money and then return to fine art.

“I never did feel like an animation person,” she says, even though it allowed her to draw and make a comfortable living. It also can be a peripatetic existence, moving along with the projects, and at 30, she began to feel rootless.

Life is what happens when you’re making other plans, and Lynette ended up working on successful animated films for major movie studios for more than 20 years. In the 1990s, she moved to Los Angeles, met her husband, actor John Serembe, and made a family. Still, the idea persisted that she had something she wanted to say with her art. When the animation jobs started drying up as she reevaluated her priorities and stopped pursuing them so avidly, it was time for a change.

Relocation to the Great Northwest

The family’s move to Olympia, Washington, in 2012, afforded Lynette the opportunity to pursue her fine art, but what she would do was an open question. The whole idea of her current project, The Missing Women painting series, actually had its genesis in college. At the time, she and a friend had discussed the idea of using women in art in a different way. As Lynette writes in the artist’s statement for her current project, “The aim of The Missing Women series is to show how women are presented but not represented in society and history.”

Alongside representation, the notion of privilege—and the lack of it—is a topic Lynette was eager to explore.

“We don’t see our own privilege sometimes,” she says. “I was trying to find a non-aggressive way to point this out.”

To her, privilege is a kind of selective perception.

“If something is not in the realm of a person’s experience, and it is not threatening, it often isn’t seen,” she says.

In the art world, “there is all of this female genius, but it is never going to be seen if we don’t highlight it.”

She believes we need to look harder at this history and what is being documented. Hence, The Missing Women.

“Our verbal and visual language explains the world from a heterosexual white male point of view,” Lynette writes. “This creates huge problems in communication for anyone else.”

And communication is essential to women’s standing in the world.

“Women are always waiting for someone to present them,” Lynette says. “We negotiate the world in a different way than men do.”

This is particularly true when it comes to the depiction of the nude female body in art, where issues of control and vulnerability surface, and women are predominantly viewed through the lens of the male gaze.

To call attention to this phenomenon, Lynette subverts the genre by taking the works of prominent male artists and reinterpreting the female form within them. Painting on wood, the nude portion of the image is left unpainted, there is a kind of outline only, with the texture and grain of the wood itself providing whatever details there are to be seen, in the form of skin, an eye or a navel.

“Sometimes the images are chosen because they say everything,” Lynette says.

Eye of the Beholder

The effect of this artistic recomposition can be disconcerting at first, but it cannot be ignored. It is, after all, a kind of erasure of the female subject that leaves it up to the viewer to reimagine. And that is precisely the point. Earlier, Lynette said she had learned about where to direct the viewer’s eye in an image, and that is clearly evidenced in this series. Further, given the bright colors in some of these paintings, the natural color of the bare wood presents a stark contrast between what is there and what is absent.

To date, Lynette has completed 36 paintings in The Missing Women series, and she aims to complete many more, possibly segueing into a new series. Art historian Dr. Jennifer Olson is writing a book about the series, and if a tour of the exhibit were to happen, well, “that would be a dream,” Lynette says.

Lynette took second place in the most recent Visual Impressions international biennial competition of more than 250 artists hosted by Ryan James Fine Arts in Kirkland. Her work will be shown at the Ryan James Fine Arts gallery during the month of February. A reception will be held on Feb. 8 from 5-10 p.m. For more information, visit RyanJamesFineArts.com. Certain images have been altered for both print and digital copy. To view more images and for more information on Lynette Charters’ work, visit LCharters.com.