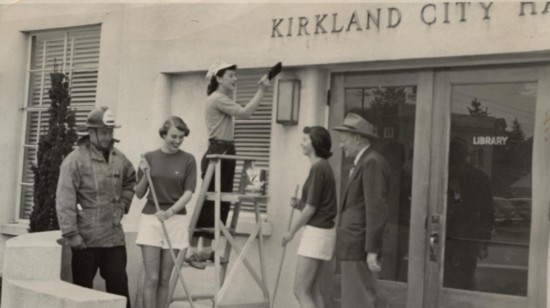 A Tribute To Al Locke

Kirkland's Parks and Recreation Would

If you were magically able to travel back to Kirkland in 1968 and join the lunch rush at the old Surf Restaurant near the foot of Kirkland Avenue and describe to the business and professional crowd who congregated there what 2020 Kirkland is like, with its multi-million dollar homes, large, mixed use developments and beautiful waterfront parks on a clean Lake Washington, instead of shock or disbelief several key leaders would probably look at each other with smiles and tell you that was exactly what they expected it to be.

In September, 2011 I was privileged to conduct a lengthy, very candid interview with two of the men whose vision in the 1960s and 70s brought today’s Kirkland into being, one a former city council member and insurance broker, the late Richard “Dick” Shinstrom, and the other Kirkland’s first city manager, the late Allen “Al” Locke. Though not present at this interview, I had also enjoyed several other shorter conversations with Dick Shinstrom and former council member and mayor Bill Woods, a retired pharmacist.

Kirkland of the late 1950s had been a sleepy small town whose city limits in those days were much closer to the downtown and Market and Norkirk neighborhoods and whose nearest neighbor was the Town of Houghton, then an independent municipality. Juanita, Rose Hill, Finn Hill, Totem Lake (a name created in March, 1972), Kingsgate/Evergreen Hill—all still rural, unincorporated King County communities. It had small town charm, remembered nostalgically today by most who were there, but it also had small town problems. Kirkland Police Department corruption created an embarrassing scandal, the streets’ condition was poor, sewage was an issue, it was treated at a facility in the middle of downtown—complete with several open holding tanks—and its effluent pumped through an outfall into Moss Bay. In 1960 the City of Kirkland’s population was 6025, the Town of Houghton’s was 1065.

About 1963, a faction of council members and business leaders created Kirkland Forward, a group dedicated to improving Kirkland’s future. Kirkland’s mayors were part time, elected directly by the voters and had full executive authority, as is still the case in cities like Seattle. A new form of city government was then gaining popularity in small suburban cities, the city manager/city council system, in which the mayor’s executive duties are removed and assumed by a professional city manager who is hired by the council. Under this model the mayor is no longer elected by the citizenry, the position becomes largely ceremonial and the mayor is also chosen by the council, not voters. Kirkland Forward members believed that Kirkland needed a professional, full time executive to bring Kirkland to its full potential.

Kirkland voters passed the ballot question adopting a council-manager system in 1964, the third try.  Council members Lee Lanham and Al King began a nationwide search and met with Allen Locke, 33, the city manager of Bemidji, MN. Locke was a Michigan State University graduate who had majored in the then new field of public administration. Bemidji is a small lakefront resort city, with a population of almost 10,000 in 1960.

Locke visited Kirkland and described his first impressions. He said it was a “blue collar town” and those with wealth “did not flaunt it”.  He described the streets as generally poor and overgrown. He said State Street was the nicest, but described Lake Washington Blvd as “deplorable”. There was a financial crisis, growth was stagnant, the waterfront was “messy” and the water, sewer and storm drainage systems were inadequate.

He saw amazing potential, however, and knew he could put into action plans to turn Kirkland around. He took the position, becoming Kirkland’s first city manager in 1965. He said his first priorities were to restore fiscal soundness, fix the streets, take advantage of the waterfront by acquiring parks, and to address the sewage and storm drainage problems. With the 520 floating bridge having opened in 1963 and with construction on I-405 underway, Locke knew significant development pressure was in the offing. He and his supporters on the council worked to end the increasing development trend of “shoe box” apartment buildings being built on pilings out over the lake. They also anticipated high rise buildings on the waterfront, so they put height restrictions into place to preserve the views of Kirklanders who lived inland.

He said one of his key management principles was to name strong, highly competent department directors, among them Art Knutson in public works and David Brink in parks.

Council members marveled at Locke’s uncanny ability to fund his projects. He was able to expertly navigate state and federal government bureaucracies like no one most of the part time council members, mostly business and professional people, had ever seen.

Dick Shinstrom gave a great example of Locke’s funding finesse, he said that in the 1960s, unbeknownst to most small town leaders, a great deal of federal money had been earmarked for highway beautification, a pet project of then first lady Lady Bird Johnson. In those days Kirkland had unsightly wires strung between utility poles all over the downtown area. Locke shrewdly managed to secure sufficient federal highway beautification dollars to bury the unsightly wires, remove the poles and even had enough left over to construct the planting medians that we still enjoy today in the center of Market St.

In 1968 Kirkland and Houghton voters agreed to merge into a new City of Kirkland, which brought in some of Houghton’s far sighted council members, like the late Bob Neir and the late Doris Cooper. It also presented several great Houghton waterfront opportunities, like the rusting, rotting remains of the old Lake Washington Shipyard and a decrepit Standard Oil tank facility. Instead of the industrial Houghton waterfront some had envisioned, these were eventually transformed into the Carillon Point development and Doris Cooper Houghton Beach. When the soggy 9-hole Juanita Golf Course property became available it was acquired and preserved as a wildlife rich park that lets us glimpse Juanita Bay in a natural state. Locke also made deals with the late Louie Marsh and Louie Sands, of Sands Lumber Company, to acquire their waterfront parcels, today’s Marsh and David Brink parks.

Marina Park in those days was a rotting 1930s-era former ferry wharf and a muddy parking lot with a small boat ramp and unsightly broken concrete rubble placed along the lake edge to prevent erosion. Locke and the council wheeled and dealed and worked to create the Marina Park and Pavilion we know today, what he described as a place for families to enjoy while enhancing and protecting the shoreline.

Most Kirkland kids of the early 1970s have fond memories of another example of Locke’s frugality and inventiveness. He heard that a sizable hollow log that had washed ashore at Alki and he hopped into his car and drove out to have a look. Inspecting the log he decided it would be perfect for the use he intended. But he had to work fast, the tide was coming back in. Locke called someone he knew in management at the old Puget Power Company and convinced them to send out a pole truck—a type of crane truck used to lift and install utility poles. They backed the pole truck as close to the beach as they could get it and then ran wire rope to a choker set around the log and then winched it up the beach until the pole truck’s boom could hoist it up and lay it into the truck bed. They drove the log to Kirkland and Locke said the Puget Power truck operator was a little surprised when Locke asked him to just drop it on the sand near the water’s edge at Marina Park. Transforming that log from driftwood into what is doubtless the most creative and one of the best loved and well-remembered, yet least expensive items of play equipment in Kirkland’s history.

Al Locke retired in 1985, but was active on the boards of several professional organizations and served as interim city manager for several newly created cities, including Mill Creek. He died in 2014 at 82 and is rightly remembered as one of the key figures who spent a career creating for us the high quality of life Kirklanders enjoy today.

Photo 1 - Marina Park about 1958, mostly an open, muddy parking lot with concrete rubble along the shoreline. The US Air Force Sikorsky UH-19B Chickasaw rescue helicopter that landed there clearly generated a great deal of interest.

Photo 12 - The old Kirkland City Hall served from the 1940s until 1982. All city departments were run from this building. It was located on 3rd Street at Central Way.

Photo 13 - Sands Lumber Company was located at 533 Lake Street. Al Locke purchased the property on the city's behalf from Louie Sands in 1970. The site is today's David E. Brink Park, named for Locke's park director, a man who played a major role in the creation of many of today's most popular parks. Brink is less remembered for the valuable role he played in restoring and organizing the records of the Kirkland Cemetery.

Photo 14 - Former mayor and council member Bill Woods and former council member Dick Shinstrom jog through Peter Kirk Park in 1969 with Miss Washington, Carol Pavel. Both men played an important role in promoting the Kirkland Forward agenda, which included creating the city manager position and hiring and supporting Al Locke. Photo 15 - Another shot of the old city hall, "spring cleaning", year unknown, c.1955 Photos 16 & 17 - Pat and Dick Shinstrom, and Al Locke, 2011. I took these photos during my lengthy interview at the Shinstrom home where they and Al kindly spent several enjoyable hours sharing their recollections of remaking Kirkland in the 1960s and 70s, providing the information for this article. Dick's father, Clayton, started the Shinstrom family enterprise in Kirkland in 1912, originally a bank and insurance firm, and today the Shinstrom & Norman Insurance Agency is still family-run and has the distinction of being Kirkland's oldest business. Pat "Meema" Shinstrom grew up on Hunt's Point and was still water skiing on the lake into her 80s! She and Dick married in 1954, she passed in 2014 and he in 2016