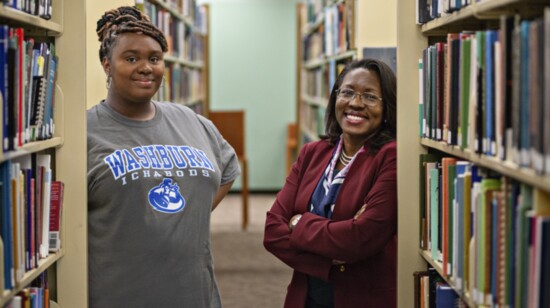 A Superstar in the Making

In 2018, USD 501 Topeka Public Schools began College Prep Academy with 43 seventh- and eighth-graders. That first group from Eisenhower and Chace Middle Schools followed a rigorous course of study, working two grade levels above the traditional curriculum with year-round academic opportunities. The goal was to see them graduate high school with 30 to 60 hours of college credit or an associate’s degree, and a clear plan for their future.

One of those original students, Highland Park High School’s T’ahjanae Ray, will spend her junior year also as a freshman at Washburn University. Ultimately, she will graduate with both her high school diploma and liberal arts associate’s degree at the same time. The district has secured community partner donations to provide a full scholarship for Ray, who has also secured scholarships to complete her bachelor’s degree.

“I’m ecstatic,” Ray says of attending college. “So excited and a little nervous just because I’m the first, so I have a lot of pressure on me just to make sure I’m doing everything right. I want to set an example, and I want to show other students they can do this too.”

“This is a superstar in the making,” says Dr. Alan Bearman, Dean of University Libraries and the Center for Student Success and Retention at Washburn. “T’ahjanae is going to do great things. We’re so happy she’s coming to Washburn. Schools all over America want students just like this. We’re going to help her live her dream, and she’s going to be a star.”

The TPS College Prep Academy was the brainchild of district superintendent Dr. Tiffany Anderson, who implemented this type of program in her previous school systems. What began with middle school students has now expanded to the elementary level with the creation of Early College Prep Academy at Loman Hill Elementary.

“I’m so excited not only for T’ahjanae but for all the students she represents,” Anderson says. “She’s demonstrating that working at the highest levels of rigor in middle school and high school can lead to college opportunities very early. College Prep Academy also closes that economic gap for families who simply may not be able to afford college expenses. We take care of almost two years of college.”

Ray feels prepared for university studies. She will major in political science at Washburn while staying involved in theater and other extracurricular activities at HPHS. Her plans include obtaining a law degree to help women in need.

“College Prep Academy was hard, but I feel like it made me a better student because it made me take charge of my own learning,” Ray explains. “It really makes you understand who you are as a student and what you need to grow and be strong academically.”