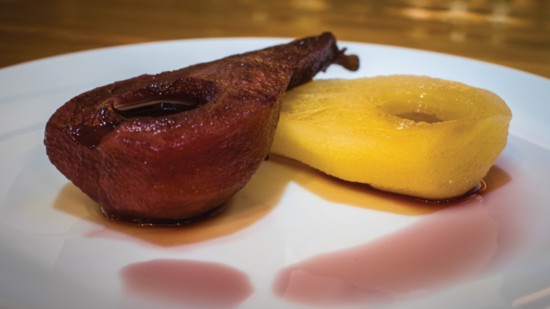 A Stellar Dessert Option That Pairs with any Season

Tucked into the backstreets of Braga, Portugal, where only locals venture, you’ll find Delicatum.

Try the pears poached in Port wine. This unassuming dish may seem basic, but its rustic appeal lies in its ability to pair with any season. Beyond a stellar dessert option, this succulent sweet treat also pairs well with grilled meat. Similar to an apple chutney, this dish is a fabulous balance to chargrilled flavors.

2. Lower the heat to low, add 6 pears to each pan, and cook slowly until they’re tender, about 30 minutes.

4. Place a half pear from each pan onto a plate, drizzling a spoonful of their respective syrups on top. Serve.

TIP: Feeling extra sinful? Top the fruit with a dollop of vanilla bean ice cream and an extra drizzle of Port wine sauce.