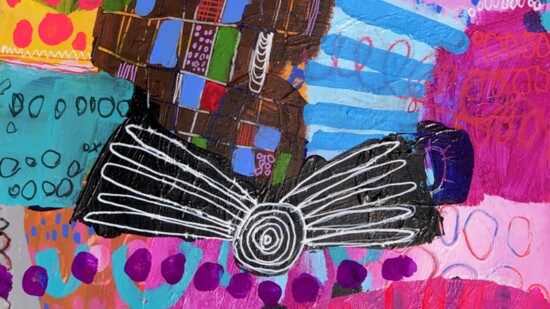 “I’m either painting, playing with my cats or working in the yard . . .” If you don’t catch Janet Skates on the phone, that’s what you’ll hear. It’s the Tulsa artist’s voicemail message, and, in a few words, her art. Her voice conveys a tangible passion for plants and animals matched only by her vivid, colorful works.

With similar passion, Chris Mantle, another local artist, describes his creative purpose largely channeled into one subject: the buffalo.

Both have had meandering paths, but they’re staples in Tulsa’s art scene and beyond. Mantle has his own gallery on Cherry Street in Tulsa. Skates primarily sells her work through Instagram to people from as close to Broken Arrow and as far away as Australia.

Equally, both artists showed creative aptitude from a young age. Mantle’s parents were divorced, so his childhood was split between two states: Oklahoma and Louisiana. While he was living with his mother in Oklahoma, he remembers getting letters from his father in Louisiana ornamented with small ink drawings. “I remember being inspired by those. I wanted to be like dad,” he says.

After graduating high school in Louisiana, Mantle drew, painted, played music and found his way back to Oklahoma. In the Tulsa area, a warehouse-type gallery gave his artwork – and eventually himself – a home. “A little lady named Nannette was hosting all sorts of artists just as long as you paid $10 per square foot,” he reminisces. He worked his way up to a gallery of his own on Cherry Street.

Skates remains close to her artistic origins. “I still love crayons,” she says. “I’ve always wanted to make art as long as I can remember,” Skates exclaims. She worked at an art store while in high school, packaging painting kits for clients. “I was exposed to oil painting and acrylic painting there and I knew I loved it.”

She didn’t pursue an arts career initially, though. Raising three sons, managing a bakery, working in floral design and planning events kept her busy until she started painting full time several years ago. “I found you can make a living at it. It’s not something that was ever presented to me as a career choice right out of high school,” Skates says.

It’s clear in just a few interactions that Mantle and Skates are busy people. Finishing full days of painting and taping up boxes headed to eager commissioners, they seem to be thriving.

Mantle gained popularity creating abstract portraits for attendees at festivals like the Blue Dome Arts Festival. His $2 works drew lines that kept him busy for hours. He’s reprised this idea virtually in an attempt to boost morale and preserve community through the pandemic. Anyone interested simply comments on his Facebook post with their photo and pays two dollars through PayPal. He’s had hundreds of requests.

If you’ve seen much of Mantle’s work, you’ve probably noticed a trend. Buffalo pervade his work’s subject matter just as they once did the American prairie. And that’s what Mantle’s work is about. Mantle found his bovine inspiration through the Bible. He traced its use of the word “unicorn” to the word “buffalo.” “You can ask Siri how many times the word unicorn is mentioned in the King James Version. “She’ll tell you,” he says. “It’s often used to symbolize the divinity of Christ.” He describes how the peaceful species encapsulates that idea. “They can melt snow several inches in front of them because of their collective heat and energy,” he adds. Referring to a famous photograph of a massive pile of buffalo skulls, he says, by painting them, “I wanted to give life to every one of the buffalo skulls I saw.” One of his first buffalo commissions came from someone having their abstract portrait done at the OK Mozart festival in Bartlesville.

Nature also inspires Skates. Her colorful works reflect time gardening, hiking and even listening to music. “Rarely do I paint without music,” Skates says. “It kick-starts me.”

Like Mantle, she hopes to send a message through her work. “My life’s purpose is to share what’s in here,” Skates says, gesturing around her studio, “to bring people joy.” “The world is such a wonderful, incredible place, but it’s also a dark place sometimes. If viewing the artwork can somehow touch people in some way, that’s everything to me,” she says. Her work seems to achieve this, too. “It’s amazing the number of people who write to me, especially during this last year, and say ‘I was having a horrible day and I see this and it made me so happy.’ Even for people who can’t afford the artwork,” she said.

Skates also spends time making instructional videos, mentoring aspiring artists and holding workshops across the country. This year, the pandemic forced hosts to cancel her workshops, so she’s expanded her video offerings and found them surprisingly fulfilling. “It’s like being in the studio together. I stand here and paint and talk with them,” she explains.

Her artwork in “Marmie: A Mouse on Main Street,” a children’s book and fundraiser for The Museum Broken Arrow, earned the literary award for illustration from the Oklahoma Library Foundation. The book combines the artwork with vintage photos of Broken Arrow leading readers through a walking tour of Main Street in Broken Arrow.

He wanted to take his affection for buffalo to the next level, too. “I did some research and thought I could sell some paintings and buy a Buffalo and keep him in the backyard,” Mantle said, but it turns out that owning a buffalo takes quite a bit of space.

For more information on either artist, check out their Instagram pages.