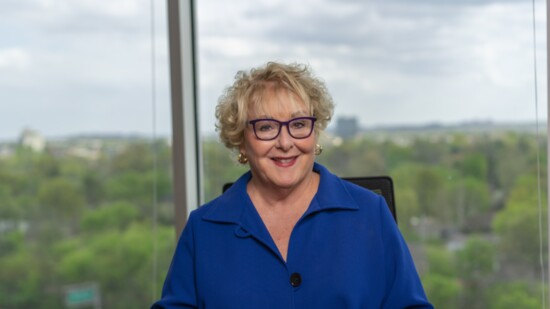 A Visionary for Care

It took Gail Lapidus eight months to agree to take on the role of CEO of Tulsa’s Family & Children’s Services. She’s now led the organization for 35 years, creating new programs designed to address Oklahoma’s high rates of women’s incarceration, connecting the 911 dispatch with mental health professionals and expanding to serve more than 120,000 Tulsa-area residents each year. But at first, she didn’t want the job.

Lapidus was happy as a family therapist at Family & Children’s Services and enjoying building her skills when the organization’s executive director resigned. She agreed to serve as interim, but when asked to step into the role permanently, she refused.

The rationale behind her initial decision highlights a mindset she cautions women against. “Most women didn’t have big role models. We hadn’t been in the workforce that long at the time. I didn’t think it was right for me to take this job as executive director because I wasn’t trained as an executive director.”

She describes accepting the position after hearing from a male colleague who told her about how, in his view, men always take promotions whether they feel qualified or not.

“I’ve been teaching on female leadership for a while, and it’s amazing to me how many women feel today exactly like I did back in 1986,” Lapidus says. “We have a different set of rules that we think we have to go by and hold ourselves back.”

Lapidus says she ended up in her field almost by accident. She had never heard of social work when she started college at the University of Oklahoma.

Her future career sprouted from an interest in social justice issues. “There was great attention on the idea that our generation could change the world. That was really the theme of my life when I was at OU,” Lapidus says. She was a college student just as the women’s and civil rights movements were growing, and quickly got involved.

“Someone said to me ‘you are so good at this, and there’s a department on campus called social work you should check into. They focus not only on helping people individually, they also really work toward social justice issues and changes at public policy level,’” Lapidus says.

After meeting faculty and taking a few classes, Lapidus knew it was a perfect fit. She reflects that timing played an important role in determining the course of her studies and her life.

“A lot of times when you come of age, what’s going on in the world at that time can literally affect your career choices,” Lapidus says. “I’m one of those examples.”

After completing graduate studies, she centered her career around helping vulnerable people, those who need a second chance or even a first. She says experiences with those facing poverty early in her career inspired her and taught her that those of us who don’t face serious day-to-day difficulties have a lot to learn from people who are over-burdened with challenges.

“I saw with my own eyes two things: how poverty and lack of opportunity really pushed people down, but also how strong these individuals were,” Lapidus says.

“I had studied the forces in society that lead to poverty, but what I didn’t learn was how strong, resilient and creative this population is.”

It’s clear in talking to Lapidus that she’s the epitome of a lifelong learner. She says that quality has been vital in her role as a visionary for Family & Children’s Services. It was also one of the reasons they were able to pivot their hundreds of therapists and psychiatrists to serve clients through telehealth care within two weeks.

During her tenure as CEO, Lapidus has seen shifts in the ways Family & Children’s Services helps people and the lenses with which they view those seeking help. She says one of the most important things the field has recognized over the past several decades is the role that trauma plays in family functioning and individual mental health.

“We now understand that if you’ve suffered a tremendous amount of adverse childhood experiences, that you are likely to encounter very complicated health problems throughout your lifetime. We know that certain toxic experiences can literally change the brain,” Lapidus says.

Lapidus is particularly proud of their dedication to supporting women in the community. She says one of Family & Children’s Services most prominent programs, Women In Recovery, is aimed at reducing women’s incarceration rates. Once they started the program, Lapidus’s team realized that women’s pasts, riddled with adverse childhood experiences, played a massive role in the issue.

“Our job was to help them heal from their trauma and help them begin to re-architect their brains through different therapies so that they might have this opportunity to heal and have buffers against all the forces that are out there,” Lapidus says.

She says Family & Children’s Services fills important needs for many people living below the poverty line who face severe mental illness. In the organization, people facing these challenges can find support like therapy, psychiatry, case management, job training and even a pharmacy.

Family and Children's Services addresses a broad spectrum of needs, but employees across their many locations are united in their goals. “The one thing that I think ties our work together is a commitment to making sure that the poor, under-resourced, uninsured populations have the best care available at our organization,” Lapidus says.

“I had studied the forces in society that lead to poverty, but what I didn’t learn was how strong, resilient and creative this population is.”