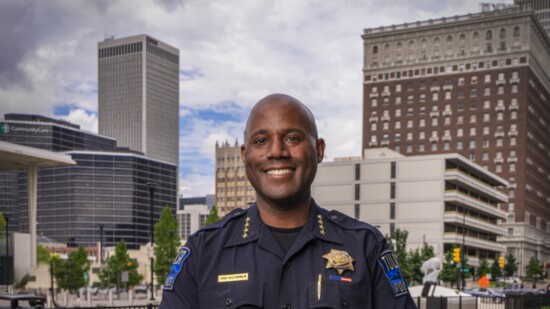 Hail to the Chief

When Wendell Franklin agreed to become Tulsa’s 40th Chief of Police in January 2020, there were no confirmed cases of COVID in America. Donald Trump was President. George Floyd was alive. The city that had downplayed and then slowly grappled with its role in the 1921 Tulsa Race Massacre had never hired a Black police chief to be where the buck stopped. A 23-year veteran of the TPD, holding the rank of Major, Franklin moved into “the room where it happens” and then made it his own.

The day following President Biden’s June 1 visit to Greenwood, Chief Franklin made time for our interview. He hadn’t taken a day off in weeks, but his focus was sharp, and his comments unguarded.

“You know, when I was appointed, I talked with Mayor Bynum about the challenges, in general, of me being the person he selects,” shared Franklin. “I really think I was trying to talk him out of selecting me because I believed, and continue to believe to this day, that any of the other applicants would have had an easier time than I would being in the position,” he said. “So, as we hammered out things and he offered the job to me, I met with him and a few members within the Mayor’s Office and Human Resources. They all were just overwhelmingly supportive and said, ‘We’re going to help you out every step of the way. Whatever you need. We will work through it and find what you need.’”

Franklin occasionally had been “poked and prodded” by colleagues who wanted him to seek higher rank. His good friend, the beloved Jenks coach Allan Trimble, also encouraged Franklin. “He kept saying, ‘Hey, when are you going to be Chief?’” remembered Franklin. I’d say ‘Oh my God, Coach. I’m not going to be Chief. That’s not something I‘m looking for’ — and here I am.”

One wonders if Franklin had foreseen how 2020-21 would unfold, that he might have chosen differently. Certainly, he’s had options. Having first earned a bachelor’s from Langston University, Franklin graduated from the Executive Research Forum’s Senior Management Institute for Police in 2015 and from the FBI National Academy in 2016. He’s served TPD in high-level and sensitive investigations, and in 2019 operated the northern command post of the Emergency Operations Center during the Tulsa flood. Years earlier, after 9/11, Franklin had filled out paperwork to join a federal agency. “I wanted to do more, you know, ‘What more can I do to be a part of protecting our country?’”

Franklin’s connection to family kept him from leaving Tulsa. He was born and raised in the city, graduating from Booker T. Washington High School. “It’s home to me,” he said, warmly. “It’s a small city, but it’s a big city. So, you get a little bit of everything in Tulsa and it’s quite unique. You can travel around the country and there’s not one city where you can say, ‘Hey, this seems like Tulsa to me.’ You just don’t get that anywhere else.”

A little over a month after Franklin became Chief, COVID arrived in Tulsa. The head of the police union and a 911 dispatcher died from the virus. With little knowledge of what they were facing, Tulsa police officers continued their work as front-line public servants, protecting citizens from both visible and unseen enemies.

TPD had much more to tackle as the year progressed. Following the death of George Floyd, civic unrest in Tulsa resulted in blocked highways, property destruction and the intervention of the National Guard. Though there were peaceful protestors in the mix, others used the protest as a cover for vandalism.

“If I could do anything different, I wish that there were not businesses that had windows broken and people inside attempting to steal things. It’s better to stop it before it happens, but it’s extremely difficult to do that,” said Franklin. “I think we did a remarkable job because our officers focused efforts on those agitators within the crowd. It helped tremendously to have the helicopter available to direct ground officers into various areas and have videos of individuals we could later prosecute.”

Problem-solving and connecting with colleagues are parts of the job that Franklin enjoys the most. After violence erupted on Tulsa streets, TPD evaluated their response to determine what they learned and what they could improve upon. “We take everything that we do, and we evaluate and critique ourselves to figure out ways of doing things better,” he said.

June 2020 brought more potential powder-keg moments to Tulsa when a hastily organized rally for President Trump was held at the BOK Center. Many citizens viewed it as a COVID super-spreader hazard, and others were angered by the President’s choice to hold the event on Juneteenth, a date that celebrates the emancipation of slaves. The rally date was eventually moved, but tensions in the community remained high. “The more people that are in a confined area, the worse something could be,” Franklin advised. “That was a challenge.”

Not long after the Trump rally, Franklin was awakened one night with disturbing news. Two officers had been shot during a traffic stop. The 43-year-old father of two, Sgt. Craig Johnson, died. Officer Aurash Zarkeshan hung onto life by a thread. “I felt like I was sleepwalking through a lot of it because we had not had a tragedy like that in 24 years,” recalled Franklin. He credits a multitude of caring people and trained assistance groups for helping the police department cope with those dark days.

“Everyone seemed to elevate and comfort one another to get through it,” said Franklin. When dealing with tragedy, preparing for a presidential visit or the heavily armed Second Amendment March, the TPD, the mayor’s office and other city departments all lend expertise and support “to make it all work,” he noted.

Franklin’s wife Arquicia has been at his side for his entire law-enforcement career. Knowing that long hours, graveyard shifts and the nature of policework affects family life, he doesn’t make a career move without consulting her first. Their two sons, both Broken Arrow High School grads, are grown now. His oldest graduated from the University of Oklahoma, where he met his wife. His youngest played football at Pittsburg State and just finished his second degree there. “He’s the first one in our family with the master’s degree,” said Franklin. Education, he emphasized, and spiritual wellness have been cornerstones of family life.

“With my boys, I don’t think that they ever really concerned themselves with the color of their skin. I know that we seem to make that such a topic, especially today though we’re so much more diverse now than 30 ,40 or 50 years ago,” Franklin offered. “I love Martin Luther King’s speech where he had hope that his children would not be judged by the color of their skin, but by the content of their character.”

Chief Franklin would tell you that if you’re wearing a badge these days, the job is seemingly insurmountable. He knows from his own experience that you can’t please everyone. “It’s a juggling act,” he surmised, but occasionally there’s a perk. “I would never in my life ever thought I would be shaking hands with a president, but I have been there now, twice.”

"We take everything that we do and we evaluate and critique ourselves to figure out ways of doing things better."

“I would never in my life ever thought I would be shaking hands with a president, but I have been there now, twice.”