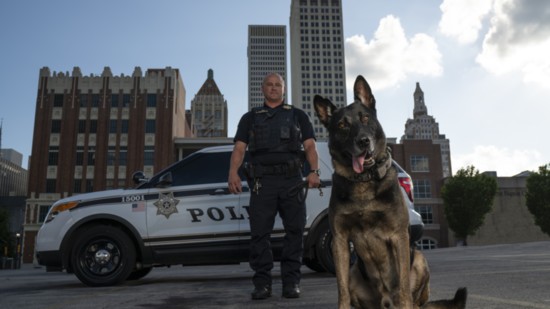 Animals We Love Helping the Community

Tulsa is the home to many service animals who make the lives of people better. We celebrate three very special animals who serve our community in unique ways from police work to fundraising. Martin Luther King, Jr. said, “Never, never be afraid to do what’s right, especially if the well-being of a person or an animal is at stake,” and that’s exactly what each of these animals and their partners do.

Riggs is one of  the nicest and most playful dogs you’d ever hope to meet but he is also tough and stays on the job no matter what.

Tulsa Police Officer Chad Murtaugh and his partner K9 Riggs assist field officers and detectives who respond to violent crimes. The two were matched in 2012 and trained at the U.S. Police Canine Association for three months before serving the citizens of Tulsa.

Officer Murtaugh named the mixed shepherd “Riggs” after the officer from the movie Lethal Weapon. Riggs is a playful dog but focused and tough enough to track and apprehend the most violent offenders. He is also certified to detect and alert to narcotics.

Riggs’ primary job is to locate suspects that have fled the scene of crimes and locate people that may be committing a crime. This year, the crime-fighting team was involved in a car chase in which the suspect ran from his vehicle on foot into a wooded area and K9 Riggs chased him down. The suspect fought with Riggs and tried to choke the dog until Officer Murtaugh arrived, and in the process, Officer Murtaugh broke his hand and tore a ligament in his foot. “Riggs stays on the job no matter what,” said Murtaugh. The suspect was sentenced to 15 years in prison for his crimes.

K9 Riggs is a big part of Murtaugh’s family. He goes home with the officer each day and even sleeps with his children. He will work for about two more years and will then retire to become a full-time pet at the Murtaugh home while the officer will be paired with a new K-9 partner.

In addition to protecting the community, Officer Murtaugh and K9 Riggs participate in educational events including visiting elementary schools to teach children about police dogs. They are available by contacting TulsaPolice.org using the Public Education Program Request form.

“Mavis Pearl spreads sunshine wherever she goes. She is known for her fun-loving spirit to help others in their time of need and I guarantee she will bring a smile to your face.”

Eight years ago, Lisa Bain and her husband Skipper nearly adopted a baby bulldog when the breeder introduced them to Fat Tina - a six-month-old bulldog. The breeder knew Tina was special and called to do great things during her life, so she offered the dog to the Bain’s and it was love at first site. The first thing to do was to get Fat Tina down in weight and then get busy helping people.

Lisa changed Tina’s name to Mavis Pearl in honor of a “lunch lady” she knew from school who inspired her to help people. “The lunch lady always wore a hair net and had a big underbite that made her look a little like a bulldog,” said Lisa. So that’s how Mavis got her name.

Today, Mavis Pearl is the trim ambassador of Joy in the Cause, a nonprofit which provides care and compassion to those in life-altering situations. Mavis Pearl, Lisa and her volunteers conduct what are known as “hope visits” to the sick, children and elderly. They also provide care packages with requested items for families or backpacks for children including a stuffed Mavis, handmade blanket, hygiene items, toys, activity books, socks, t-shirt and more.

Mavis Pearl makes her visits in style wearing different wigs, glasses and tutus to spice it up. She is a registered therapy dog and a member of Karing K-9’s. The nonprofit has created mini stuffed animals resembling Mavis Pearl that are given to lift spirits and serve as a comforting reminder of the dog’s visit to a hospital or nursing home. “Our volunteers sew special outfits for the stuffed dogs,” said Lisa. “One might be dressed as a firefighter, another as a train conductor and just the other day we gave a stuffed dog away dressed like Superwoman.”

Many of those receiving help from Joy in the Cause ultimately become volunteers. In fact, this last summer, 163 youth worked 472 hours on the backpack project which are given by first responders and volunteers to children in trauma. The nonprofit also partners with local businesses including Blue Jay Cleaning Services who has made the commitment to clean the homes of two families who have children battling cancer each month.

If you know of someone needing a visit from Mavis Pearl or if you would like your own mini Mavis stuffed animal, visit JoyintheCause.org.

Late night dinner and bar-customers walking up and down the street would play with the cat through the door taunting him with dollar bills which CASHnip Kitty would snatch and pull inside.

CASHnip Kitty is a brown, fluffy office cat who lives at an advertising agency named GuRuStu on 3rd street in the East Village of downtown Tulsa. When owners Stuart and Beverly McDaniel adopted him from Tulsa Animal Welfare several years ago, they called him “Sir Whines a Lot,” because he constantly tried to distract the employees to get held and petted.

After owning the cat for several years, the business owners noticed that when they arrived at work each morning, there was cash inside the glass front doors where Sir Whines a Lot would hang out at night. They came to realize that late night dinner and bar-customers walking up and down the street would play with the cat through the door taunting him with dollar bills which the kitty would snatch and pull inside.

The owners changed his name to CASHnip Kitty and set up a Facebook page with videos of the cat in action. As time went by, CASHnip started to develop a fan base of people from across the world who mailed greeting cards filled with cash and checks. The money, more than $7,000 in the past two years, has been given to support the Tulsa Day Center for the Homeless.

Today, CASHnip Kitty’s followers have grown to 22,000 on Facebook and he has his own website, CASHNipKitty.com, where fans can get the latest news on his antics and buy CASHnip Kitty t-shirts and specialty items.