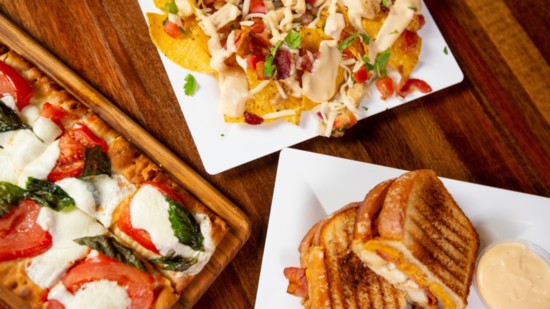 Setting the Standard for Movie-Going

A cinema with heated reclining seats, state of the art projection and sound that serves gourmet foods in Frederick? Yes, please!

One of the coolest places in town, Warehouse Cinemas, opened its doors in August amid much anticipation. The cinemas, founded by HighRock Studios and Greg Mills, bring a luxury experience to the Golden Mile inside the old Frederick Town Mall.

Rich Daughtridge, Founder and CEO of HighRock Studios, says, "We really liked this location; however, this was going to be a Walmart, so it wasn't available. We continued to look around Frederick for a location that would suit our vision.

While on the airplane returning from a business trip, I received an email from Richard Griffin, the Director of Economic Development for the City of Frederick. He knew we were looking for a space and emailed to let us know the mall had become available again. We met with him immediately and went to see it."

"Walking through it, it was intimidating. It was a mess. You have to be able to have vision to see through all of the debris and the design of the former mall. We had to gut everything and completely rebuild it," Daughtridge says. Greg Mills, Co-Founder, and COO was entirely responsible for the construction project and equipment and getting the team on board.

"This mall shut down in 2012, and lots of things popped up. It was a challenge from day one- from leaks to undersized electrical service; there was a whole host of issues but, it turned out better than I could have imagined," says Greg.

Daughtridge says, "Our vision for Warehouse Cinemas was to introduce a different way of movie-going. For us, this is the way movie-going should be. It is an experience that is not only about the movie; it transcends that. It is about coming and spending time with people you care about. So, this dream was more about creating something for the community that allows people to make memories. And that drives all the ways we do customer service."

"As far as design, we wanted to create a space that felt more like a brewery or a winery. The goal was to make it a place where you want to hang out. The design evolved into modern industrial or what some call eco-modern. We used brightly colored sea containers as doors to the ten theaters and for the bar. Modern industrial wood accents are interspersed throughout and bring an element of warmth," he says.

More than a pretty face, Warehouse Cinemas intends to blow you away with the extraordinary viewing experience. In addition to the leather recliners with seat warmers and tray tables, all the theaters have 4K projectors, the latest Dolby 7.1 sound, and theater #6 is a step up with Dolby Atmos sound. According to Dolby.com, "In a Dolby Atmos theater, every speaker- as many as 64 total- is powered independently and gets its own separate audio feed. In effect, each speaker is its own zone."

"With SkyVUE™, we optimized the angle of the screen and tilted it to 10 degrees for best viewing. It has never been done before. We have a patent-pending on the design, which is the relationship between the floor-typically flat or sloped, the angle of the screen, and the recliner's angle. Our patent has diagrams representing all these different angles coming together to create SkyVUE™," explains Daughtridge.

Food is central to the movie-going experience, but at Warehouse, the food is anything but typical movie theater fare. Warehouse Cinemas has free refills on drinks and popcorn and sets a high bar with real butter.

"We know it's more expensive, but it's so much better. We want people to have an extraordinary experience and it's the small things that all add up," says Daughtridge.

Food and Beverage Manager, Mack McKinstry, says, "We have the perfect combination of an elevated gourmet offering, but it is simple enough that we can do it quickly. We have classic comfort foods with a twist. Our menu consists of gourmet grilled cheeses and gourmet flatbreads, movie night bites, chicken street nachos with signature beer cheese, fried mac and cheese bites, and more."

An equally impressive drink menu is needed to complement the gourmet fare. Patrons are in luck because Warehouse Cinemas boasts 28 taps of local beers from Frederick and surrounding counties, while the bar features signature cocktails and wine.

"This is an experience that you cannot get anywhere else. I am extremely proud to be a part of this organization that has taken a cinema experience and made it unlike anything else. They have set a standard for what cinemas are going to look like in the future," says McKinstry.

"We have the perfect combination of an elevated gourmet offering, but it is simple enough that we can do it quickly. We have classic comfort foods with a twist," says McKinstry.