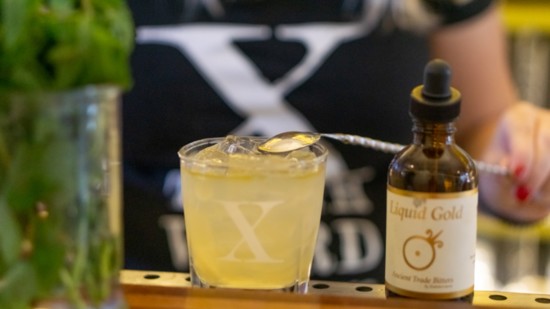 Tenth Ward Distilling Company was conceived of the lab on East Patrick Street as a friendly and interactive space in which patrons can sample and learn more about their locally made craft liquors, including unusual flavors like smoked bourbon, caraway rye whiskey and absinthe—an herbal, emerald-colored spirit with a hint of licorice flavor—according to Monica Pearce, distillery owner, designer and mastermind.

“My staff has created this very comforting, cozy, welcoming culture with our customers, and that’s how I want you to feel when you walk in the door,” Monica says, adding that she hopes customers will feel at ease and take their time exploring Tenth Ward’s cocktail flights and mixed drinks in an unhurried, unpretentious yet sophisticated atmosphere.

Like a scientific laboratory or an industrial production facility, the Tenth Ward cocktail lab-style is simple, bright and clean with long, lean sightlines, yet the look is not too stark, too sterile or too modern.

“I like the industrial look, although sometimes it becomes almost too much,” she says. “I don’t want to go industrial fad. I wanted to go more classic industrial. I want the look to last.”

“We’re in a historic building, so we definitely want to capture the tradition of the space,” Monica says, explaining how the design team tried to preserve existing fixtures and native design elements whenever possible.

In addition, striking, uplifting pops of sunshine yellow appear in unexpected places throughout the lab, like the sinks in the ladies' restroom, as a reminder to always “ward off the ordinary,” as Tenth Ward’s tagline encourages customers to do.

Although she had multiple Pinterest mood boards and a cohesive vision to guide her in the overall design of the space, Monica and her colleagues adjusted the design plan as necessary before the lab officially opened by testing various layout, decor, paint and furniture options.

“The design aesthetic in the space organically developed itself based on what worked best for us, where the flow of people was going and what we were realizing in terms of color, tone and furniture style that feel good in here,” she explains.

She also relied heavily on the aesthetic sense of her Marketing and Events Manager, Amanda Burroughs, a graphic designer who developed the eye-catching cast of “weirdos” or characters that adorn Tenth Ward’s distinctive liquor labels, to help form the look and feel of the lab.

Amanda’s Victorian-garbed creations will soon appear in a substantial, life-sized gallery wall mural that will encourage visitors to pose with their colorful, edible flower-adorned cocktails in hand, the perfect Instagram fodder.

“We want our customers to always be interacting with the brand and enjoying it,” Monica says, citing the photo gallery and mural as a way for customers to let loose, be creative and have fun without worrying they might be judged for being too quirky or too silly.

Another mural in the cocktail lab is a fond homage to some of the distinctive subcultures of Frederick, featuring penny-farthings to symbolize the city’s annual 19th-century bicycle race along with subtle allusions to steampunk, a literary, fashion and the social genre that fuses Victorian-era sensibilities with futuristic gadgets, gizmos and technologies.

“I drew on a lot of inspiration from the steampunk culture,” Monica says, noting that one of the largest steampunk gatherings in the United States is held in Frederick each year, an event at which Tenth Ward regularly hosts absinthe workshops. She calls attention to the green absinthe fairy depicted in the mural, who wears aviatrix goggles as a salute to her many steampunk fans.

In addition to encouraging cocktail exploration and experimentation, the lab offers other interactive, hands-on experiences like themed tastings focusing on specific and seasonal ingredients, whiskey-scented candle making, distillation classes and more. There will also be live music on weekends.

“We want it to be an experimental learning process. Craft spirits are very new in popularity; not everyone knows the difference between a bourbon and a rye. We provide an interactive nosing and tasting experience for our customers so they can learn how to pull flavor profiles out of a spirit.”

Because the lab offers ample seating in an expansive lounge area, customers will be able to take their time sampling these flavor profiles in mixed drinks like the sweet Lady Fritchie, smoky Jalapeño Margarita and herbal Key City cocktail. With endless drinking possibilities in a lab like this, Frederick will certainly ward off bar boredom.

Anna Liisa Van Mantgem is a 17-year Frederick County resident who enjoys exploring Frederick-area dining and drinking establishments. You can reach her via Instagram at @AnnaLiisa_000.