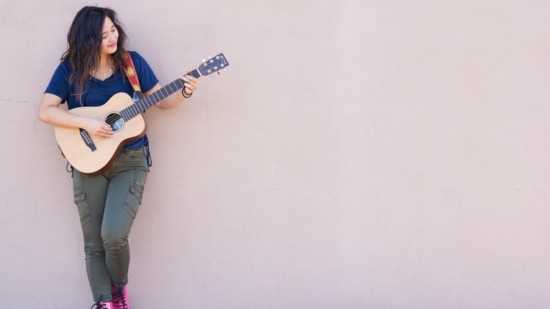 Lois Zozobrado Steals the Spotlight While Shying Away From It

Many girls dreaming of a music career envision themselves being the next Taylor Swift—singing to sold-out stadiums, flaunting designer duds on magazine covers and redefining what it means to be A-list famous.

Lois Zozobrado has two albums under her 18-year-old belt, but she's not one of them. The Perry High School graduate eyes a more discreet and, in her eyes, more rewarding role in the industry.

She talks about her experiences in Nashville, a music city fueled by more grind than glitz. She speaks in awe of experienced musicians who have spent years building their craft. They aren’t household names but they’re the reasons many of those stars are.

“I want to do that," Zozobrado says. "I’m not striving to be super famous. I want to be in the music business, behind the scenes.”

For now, however, the Chandler teen is a working musician who performs in various Valley venues at least two or three nights each week. But it wasn’t so long ago that Zozobrado fled the limelight.

As a child, she had severe stage fright. An old soul who had outgrown the playground at an early age, Zozobrado was bullied, which added to her trepidation.

Around age 13, her mother’s encouragement changed that.

“You have a gift from God and you’re not going to hide it,” Zozobrado says of her mother’s advice, which sparked her participation in theater. “I practiced and got used to it.”

She started performing solo and songwriting. At age 14, she penned all 10 songs on her debut album, Sunshine Boulevard, with the help of Grammy-winning producer Robb Vallier.

Not long after, Zozobrado endured two surgeries to remove vocal nodules in her throat. The second prevented her from speaking for six months. Frustrated, she channeled that energy into shoring up her songwriting craft.

She recovered and at 16, auditioned for The Voice, making it to round two.

In May, she released People I Knew, containing nine songs inspired by people in her life. It reflects her growth into young adulthood. For People, Zozobrado emphasized acoustic instruments over plugged-in sounds. Her songs take on grown-up themes, creating a collection that she says is more raw and real.

“I’ve experienced heartbreak, losing a voice for six months. I experienced loving someone I thought I could never love. You don’t really experience those things when you’re young,” she says.

This fall, Zozobrado will attend Arizona State University with hopes of transferring to Nashville’s Belmont University, which has a music business program.

Zozobrado’s passion for music may only be rivaled by her passion for volunteering. Her parents, James and Jeanne, led by example and inspired her to donate her time to various causes.

Earlier this year, the city of Chandler honored Zozobrado with its Youth Volunteer Recognition Award for her enthusiastic contributions to a bevy of organizations, including her extensive work with the Chandler Center for the Arts. As Perry’s National Honor Society President and DECA Outreach Officer during her senior year, Zozobrado continued her involvement with ICAN, Team Emery, Feed My Starving Children and CCPA.

Eventually, Zozobrado envisions living in Nashville, likely traveling and touring with artists and writing hits for stars while performing on the side.

And being on the sidelines making the spotlight shine brighter on others while remaining content with a fulfilling low-profile role is music to her ears.

“Going to Nashville and seeing musicians going to honky-tonks, playing just for tips. That’s tough,” Zozobrado says. “But that’s what I think the music business is all about.”