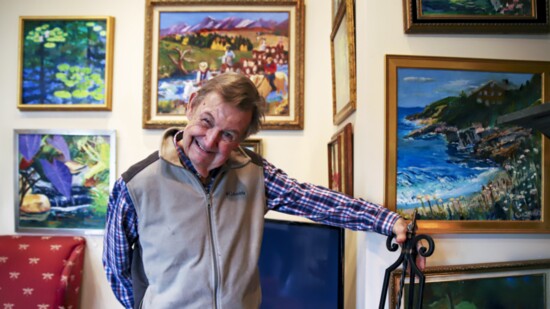 Imagine having a lifetime of memories encapsulated on your walls. Imagine looking up to see your trip to Italy next to the walk you took through Forest Park with your late wife. Imagine remembering the street where you grew up, and the field of flowers that bloom in Arizona once a year. Eighty-year-old painter Jim Einspanier creates art that reminds him of some of the most treasured moments of his life.

Jim’s life of great accomplishments, numerous degrees and businesses accolades do not rival the adventures and love shared with his wife and family; it is most apparent when taking a glance inside his home. His walls are filled with these cherished memories.

“The world is filled with so much beauty, I feel compelled to paint it,” Jim said. “But there is certainly something about creating something you feel a part of… You don’t just see with your eyes, you see with your heart too.”

Jim recalls his father taking him on trolley rides through the St. Louis parks. He remembers growing up in the Grove and the culture he was exposed too. While these memories inspired a lot of his early work, he often paints photographs he has taken over the years.

However, Jim’s work also showcases the intimacy in his life.

Jim’s late-wife Jenny called him a “hopeless romantic” as he captured their beautiful marriage. His paintings were harmonized by the daily poems he wrote her from 1960 to 1990.

His work encapsulates the best of times and helps him survive through the worst of times. He has created paintings that memorialize the passing of his wife. He has painted through his progression of Parkinson’s disease.

After being diagnosed in 2013, Jim began to lose control of movement in his hands. As the disease progressed, tremors and loss of balance made it more difficult to paint. However, it never stopped him from pursuing his love for art. He continued to paint as his realistic scenes transformed into impressionistic works of art.

“I don’t get around as well, but my art gives me a chance to escape that,” Jim said.

Jim says that painting has healing properties. He says it is a blessing to find himself adrift in a beautiful place or memory. These inspire a better outlook on life. As the world turns and troubles arise, he believes it is better to focus on the beauty rather than becoming depressed about things he cannot control.

Despite the difficult and often messy challenges of painting with Parkinson’s disease, Jim paints for hours each day in his studio. In his toolbelt are watercolor, oil and acrylic paints, but most crucial to his work is his perseverance and strength.

Jim’s full-time caregiver Sarah Payton marvels at the work her friend has done. While they work through the many challenges and triumphs of his disease, she is most impressed seeing him work at something so positive.

“He never gives up,” Payton said. “I think that he is his happiest in his studio.”

While he finds comfort in the meditative and solitary act of painting, he loves sharing his passion with others. Although Jim would rather not sell his work, he has no problem giving it away.

“I don’t want to paint for [and sell to] strangers. I paint because I love it... Each one means something to me,” Jim said. “I want to share my talent with people who will also love it.”

He regularly gifts pieces of his collection to friends and family. But in addition to his work, he also shares the gift of his experience.

“I love to share my knowledge of painting, even when I can’t do it the way I want anymore,” Jim said.

He encourages his grandchildren to partake in his love for art, providing them with opportunities, tools and inspiration to create their own works of art. He also encourages anyone willing to explore.

“If you see beauty in the world, be a part of it,” Jim said. “Whether it is with a pencil or a brush, try and take pride in that. Whatever it is, it’s amazing.”