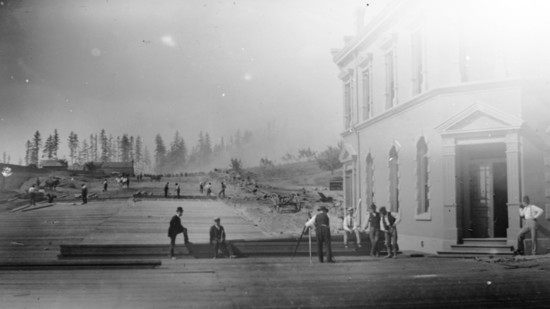 The Possibilities Are Endless

“The possibilities are endless!” Smith James “Leigh” Hunt said assumptively to Peter Kirk, a 47-year-old English steel manufacturer who had first visited America in 1886 in order to find a suitable location to establish a steel mill on the American frontier, a search now narrowed to the Washington Territory.

Hunt was 15 years Kirk’s junior, driven, ambitious, a salesman’s salesman who a contemporary described as “a financier and businessman of very unusual talents.” The 32-year-old Indiana native had migrated to Seattle with virtually no capital in 1886 with his wife, Jessie, after a year serving as Iowa State Agricultural College’s (Iowa State University) president. He quickly assembled influential friends and investors, promptly negotiating a deal by which he became the publisher and managing partner of The Seattle Post-Intelligencer, then the city’s most influential newspaper. Hunt had no desire to become a politician, but he understood the importance of controlling them, so he quickly used his new connections and The PI’s influence to become one of the most formidable power-brokers within the King County Republican Party—then the dominant political party in the region. His friends included some of the wealthiest men in the area, including Arthur Denny and Henry Yesler, who had carved Seattle from a steep, muddy, wooded hillside in the 1850s. Hunt’s father-in-law, Henry Nobel, was a wealthy, nationally prominent barbed wire manufacturer, through which Hunt gained a connection to Wall Street and some of the most powerful capitalists in America.

Seattle’s founding industry had been timber, pilings for the San Francisco market and lumber cut at Yesler’s steam sawmill for the Puget Sound market. Coal was discovered east of Lake Washington in the 1860s and near today’s Renton which by the 1870s propelled Seattle into a position of dominance on the Sound. But the coal was costly to extract and transport, and by the 1880s was proving of too low-quality to reap significant market returns to investors.

Railroads by the 1880s, however, were expanding rapidly thanks to free government land and promised booming growth. Hunt envisioned an industrialized future for the Seattle area, and he looked not to the city but to the sparsely inhabited and still heavily wooded eastern shore of Lake Washington, where tens of thousands of acres of land could be easily acquired from the hardscrabble settlers. Hunt saw a canal connecting lakes Union and Washington to Puget Sound, opening the Eastside to ocean-going ships; a navy yard (it would later end up in Bremerton) on Mercer Island; and a rail line running north/south through the Eastside. Along that line would be various manufacturing concerns and new towns and communities. The centerpiece and lynchpin to the entire vision would be a state-of-the-art steel mill, producing steel rails for use as railroad tracks, which would be loaded onto ships and sent to markets around the Pacific.

Hunt and his investors would derive most of their profits not from the rails and other goods manufactured on the Eastside, but instead from the value of the real estate, the “booms” these industries and the associated demand for housing would create. Remember, this was the 19th century: No income or capital gains or B&O taxes, no permits, zoning, government fees or other regulatory costs—big land booms offered big potential returns.

Peter Kirk, of Workington, England, grew up in the iron and steel manufacturing business with his father and brothers, but he was well-suited to it. He held several patents and was an expert in the latest innovations within his industry, including the Bessemer process, by which steel could be mass-produced from molten pig iron.

Kirk had first toured the area in 1886 looking for suitable sites on which to build his new mill. Key to the decision was the availability of three raw materials: lime, iron ore and coking coal (a high grade of coal that burned very hot, essential to the Bessemer process). Proximity to a rail line was also necessary to transport the raw materials to the mill.

Lime would be the easiest to obtain as several western Washington counties, including King and Snohomish, contained substantial deposits. Iron ore and coking coal were more elusive. A coke source was clearly a huge concern to Kirk. His handwritten notebooks, preserved by the Kirkland Heritage Society, contain pages of columns of the results of chemical analyses of western and central Washington coals. While coal is found in several areas in King and Kittitas counties, none have provided any with the qualities necessary to serve as good blast furnace fuel.

Through 1887 and into early 1888, Kirk considered several locations, including the coal mining town of Cle Elum, as part of a proposed deal by the Northern Pacific Railway, which would have involved transporting the rails out over its line to Tacoma’s port for shipping to market. Cle Elum also held appeal because iron ore had been discovered nearby. Ellensburg also wanted his mill and offered him 300 acres and other inducements. He had also considered tiny Sallal Prairie, just east of today’s North Bend, the eastern terminus of the Seattle, Lake Shore and Eastern Railway.

Arthur Denny co-founded Seattle in 1851, and over the years, he noticed that the natives who lived in the vicinity of Snoqualmie Pass used a distinct black paint to cover their faces. Believing it was made from plumbago plant, he asked “an old Indian” to guide him into the west Cascades to the source of the pigment. Instead of showing him plants, the man took him to an outcrop of rocks, telling him that from these they made their face paint. The rocks were red hematite, commonly called iron ore. In 1872, Denny staked a land claim to the deposit area.

Kirk left no record of his thought process leading to his decision, but given his demonstrated analytical and deliberative mind, it is likely a matter of Hunt’s proposal’s pros greatly exceeding its cons. Hunt was also going all in with Kirk, even more so because alien laws of that time place limits on the capital foreign nationals could bring into the U.S. If Hunt’s scheme for an industrialized Eastside failed, then Hunt would be ruined, so his commitment was total. It seems unlikely that Kirk would have bet his own future on anyone with less to lose.

The centerpiece was Kirkland—doubtless Hunt proposed the name—a steel mill and manufacturing town based in Pullman, Illinois, a precursor to the modern planned community. It would provide parks, churches and other amenities to provide mill workers with a high quality of life for that time—likely motivated by both altruism and the realization that a content labor force is more productive. Two corporations would be created: The Kirkland Land and Improvement Company, incorporated July 12, 1888; and the Moss Bay Iron & Steel Company of America, incorporated Aug. 18, 1888. By the fall, real estate records reveal Hunt gobbling up vast tracks of today’s Kirkland from the homesteaders on behalf of the Kirkland Land and Improvement Company. The mill and townsite clearing kicked into gear in 1889–90, and huge crews of hired men knocked down the towering cedar, hemlock and Douglas fir trees that had covered much of the area, often just burning them where they lay because removal and transport to sawmills were considered too much hassle. Speculators rushed in, buying even more acreage from the homesteaders.

Capital rolled in from East Coast industrialists, some of the wealthiest men of the day, including John Rockefeller. Hunt created other companies: the Jackson Street Cable Railway ran streetcars from downtown Seattle to Leschi where its steamboat, the Kirkland, ran as scheduled to the Land and Improvement Company’s wharf at the foot of Market Street. The Lake Washington Belt Line Company acquired the right-of-way and grubbed and graded a rail from Tukwila north to Woodinville, with rails laid on the south end from Tukwila to Kennydale and on the north end from Woodinville to the steel mill on Rose Hill, where at about Seventh Avenue an elaborate two-story depot was constructed. The Kirkland boom was on, and Hunt’s vision of an industrialized Eastside seemed a sure thing—especially once the government started building the canal connecting the lake to the Sound.

But in 1892, Kirkland sputtered and stalled. Political winds shifted, and the canal was sidelined. Economic factors leading to the financial depression, called the Panic of 1893, were already underway, and the big national investors defaulted on their stock subscriptions, drying up Hunt and Kirk’s capital. Mill construction stopped before any production began. Hunt’s house of cards was collapsing around them; the Kirkland boom went bust.

Hunt was ruined. Other than Jessie, he had lost it all: Yarrow, The PI, Kirkland, and his other companies and real estate projects. The Hunts left the U.S. for Korea, where Hunt had heard gold mining opportunities could be had.

The alien laws preventing Kirk from bringing in all of his capital from England actually saved him and Mary. They still had money safely in England, and though they relocated their family to San Juan Island, Kirk remained committed to Kirkland right up to his death in 1916, shortly after the canal was opened.

Some years later, an ad appeared in The PI asking all to whom Hunt had owned money to call on a particular downtown hotel room. Many did, and to their shock, there stood Hunt greeting them. Like the mythological Icarus, with Kirkland, Hunt had flown too high, and the sun had melted his wings, bringing him crashing to the ground. But despite his combination of big dreams and youthful overestimation of his own abilities, he was honorable.

He repaid each and every creditor—with interest.